[p.771] The “Savannah” measured 350 tons, and was constructed by Crocker and Fickett, at Corlears Hook, New York. She was purchased by Scarborough and Isaacs, of Savannah, Georgia, and fitted with steam machinery and paddle wheels of a new pattern. The wheels were hinged in such a way that they could be closed like a fan and taken in on deck when not in use. When in use they were covered with a collapsible canvas wheelhouse that protected the deck from the splashing water. Captain Moses Rogers was placed in command of the ship and Stephen Rogers had charge of the engine. She left New York on the 29th of March, 1819, and arrived at Savannah on the 6th of April. The Savannah Republican of April 9th, gives an account of the voyage and, in the issue of May 19th, publishes an advertisement as follows: “The steamship Savannah, Captain Rogers, will, without fail, proceed for Liverpool direct tomorrow, 20th, inst.” She did not, however, get away until the 22nd, and was “spoken “ on the 29th in latitude 27° 30’ N., which settles the point as to the time and the port of departure. Her log shows that she was off Cork on the 17th of June, when there was no “cole to git up steam,” for the bunker capacity was limited and only eighty tons could be carried for fuel but “with all sails set for the best advantage” she appears to have arrived in the Mersey at six o’clock in the evening of the 20th, “making the run in 29 days 11 hours, from Savannah to Liverpool, during which the engine worked 80 hours.”

PAGE FROM LOG OF FIRST STEAMBOAT TO CROSS ATLANTIC OCEAN
The “ Savannah “ sailed with a master and engineer from Connecticut, whose courage in undertaking the hazardous voyage created much public sentiment. 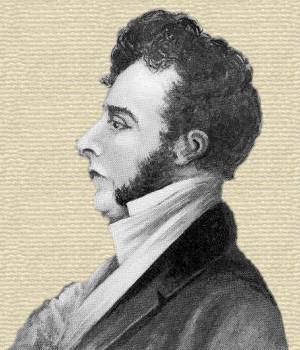 Captain Moses Rogers, at age 40 (source).
Extracts From The “Log” of The “Savannah.”

The first entry is as follows:

“A Journal of a voyage from New York towards Savannah on board steamship Savannah: Moses Rogers, Master.”

On the fifth page this is changed to read:

“A Harbour Journal on board steamship Savannah, Moses Rogers, Master.”

Later on we read:

“A Journal of a voyage from Savannah towards Liverpool on board steamship Savannah, Moses Rogers, Master.”

The first entry describing the voyage may be found, with the caption of the first page, in the fac-simile herewith [above]. The second entry is as follows:

[p.773] During the next two days the vessel encountered heavy gales and strong breeze but on Saturday there is the entry :

“These 24 hours begins balm and pleasant. Used wheels middle of the day.”

“These 24 hours begins with light breezes at N.W. and pleasant ... President of the United States James Monroe and suit came on board the ship at 7 A.M. to go to Tybe light ... At 8 A.M. got the Steam up.”

After a pleasant excursion, the first at sea on an ocean-going steamship, the party returned to the city in the evening. The next day the worst casualty at sea is entered in the words :

“Daniel Claypit cut his left thum off, the Doctor done it up and then bled James Monroe.”

It was expected that the steamship would sail for Liverpool on the 19th. And as we have shown elsewhere, it was so advertised. Doubtless the cause for delay is to be found in the following entry :

“May 19th John Western coming on board from the shore fell off the Plank and was Drounded, he was a native of Massachusetts, Town of Gray, At 01 A.M. caught John Western with a boat-hook and jury was held over an braught in accerdental Deth took himm on Ship and put him in a Coffin”

On the 22nd, Captain Rogers “got steam upand at 9 A. M. started” on the trans-Atlantic voyage. There is a not much of interest in the entries until we come to the record of June 2nd, when we learn that he “sto’ppcd the Wheels to clean the clinkers out of he furnice, a heavy sea, at 6 P.M. started Wheels again; at 2 A.M. took in the Wheels.”

Land was sighted June l6th, and the next day the “Savannah” being then off the coast of Ireland, “was boarded by the King’s Cutter, Kite, Lieutenant John Bowie.”

Unfortunately, the log-book here as elsewhere, because of its brevity, is far from satisfactory. However, in this case we have far fuller account of the amusing incident in connection with this boarding of the “Savannah” by the King’s cutter. In a letter to our New London (Connecticut) “Gazette,” Stephen Rogers, the engineer, says that the “Savannah” was taken to be a ship on fire and that the “admiral dispatched one of the King’s cutters to her relief. But great was their wonder at their inability, with all sails set in a fast vessel, to come up with a ship under bare poles… After several shots were fired from the cutter, the engine was stopped, and the surprise of her crew at the mistake they had made, as well as their curiosity to see the singular Yankee craft, can be easily imagined. They asked permission to go aboard, and were much gratified by the inspection of this naval novelty.”

Two days later (June 20) “they shipped the wheels and furled the sails and run into the River Murcer, and at 6 P.M. come to anchor off Liverpool with the small bower anchor.”

A stay of twenty-five days was made at Liverpool during which time the vessel was not only a center of curiosity but an object of much suspicion. The newspapers of the day suggested that “this steam operation may in some manner be connected with the ambitious views of the United States.” One journal, recalling the fact that Jerome Bonaparte had offered a large reward to any one who succeeded in rescuing his brother Napoleon from St. Helena, offered the surmise that the “Savannah” perhaps had this undertaking in view. “Naval officers, noblemen, and merchants from London,” says Moses Rogers in his log, “came down to [p.774] visit her, and were curious to ascertain her speed destination and other particulars.” Later on we find the record of a case of mutiny among the crew.

The entry for June 19th is as follows :

“These 24 hours begins with fresh breezes and rain. Captain Rogers told Mr. Blackmail to go on shore after James Bruce and John Smith to get them onboard. They would not come; the watchman put them in a boat, John Smith tried to nock Mr. Blackmail overboard Struck him several times, he Swore he would take Mr. Blackmail’s life but Mr. Blackmail got him on board and he denied his duty and then he was put in Irons. Middle and latter part fresh gales at S.W. and rains.”

The next day's entry shows :

On the 23rd (July) the “Savannah” sailed for St. Petersburg, “getting under way with steam” and “a large fleet of Vessels in company.” Copenhagen and Stockholm were ‘touched’ on the way and at the latter place she was visited by the royal family. This visit is recorded as follows: “His royal Highness Oscar Prince of Sweden and Norway come on board.”

While here the “Savannah” was also visited by “Mr. Huse (Christopher Hughes) the American Minister and Lady and all the Firran Minersters and their Laydes” and when she sailed she had on board as a passenger Sir Thomas Graham, Lord Lynedock, of England. She left Stockholm on the 5th of September and on the 9th she reached Cronstadt, having used steam for the entire trip.

Upon the invitation of our ambassador at the court of St. Petersburg, when the vessel arrived there, a few days later, there was a visit by the Russian Lord High Admiral, Marcus de Travys, and other distinguished naval and military officers who tested her superior qualities by a trip back to Cronstadt and return to St. Petersburg.

The “Savannah” lingered at St. Petersburg until the 10th of October, when she again sailed out under steam and this time with her bow toward home. Captain Rogers carried away with him as a substantial reminder of the success of his voyage, a massive silver, gold-lined, tea-kettle upon which the donor had engraved the following inscription:

“Presented to Captain Moses Rogers of the Steamship Savannah
(being the first Steam Vessel that had crossed the Atlantic),
by Sir Thomas Graham, Lord Lynedock, a passenger from Stockholm to St. Petersburg.
September 15, 1819.”

Stephen Rogers was also the recipient of many valuable gifts and among them was a beautiful gold snuff-box from the Emperor of Russia.

The “Savannah” arrived at her home port on the 30th of November. The log is continued for about two weeks afterward and then abruptly comes to an end. The last entry but one is so characteristic of the man who dared to do what no one else had ever before attempted, even after it had been foretold by the man who first brought together for propulsion a steam engine and a wheel, that we use it for the closing words of a sketch necessarily brief: