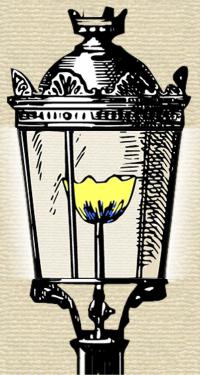 [p.116]  In 1770 it was estimated that the cost of lamps, lighting the city, etc., was £760 a year. In 1791 the city lamps were ordered to be 114 feet apart, angularly. In 1806 the cost of lighting each lamp was $11 a year. There were 1,556 public lamps and 97 private lamps in the city in 1809, which cost to light $9.50 each for eight months. In the summer of 1812 efforts were made to substitute something better than oil, with which the streets had been dimly lighted, and an experiment was made with gaslight in the park. Nothing definite resulted, however, though four years afterward, on June 18 and November 18, 1816, a “long, learned and favorable report on the subject of gaslight was made by a committee of the corporation.” On January 27, 1817, “another detailed report was made in favor of lighting the city with gas, from the trial made under the inspection of Dr. Hare, which cost $5,927.25 (Including $1,400 for seven months or his salary). The experiments were made in an old building near the east corner of the City Hall and temporary tin pipes were laid through Chatham street and Broadway as far as Dey street, and a few store windows lighted up. The light was admired, but the city authorities shrank from the expense or laying the requisite iron pipes, etc., which it was estimated would cost for the whole city several hundred thousand dollars.” In April, 1823, the corporation granted to the New York Gas Company “the exclusive privilege for thirty years of laying cast iron gas pipes in the streets south of Grand street, and reserved the privilege of using the gas for the street lamps, on the same terms and cost as oil.” On May 11, 1825, the company began the proposed improvement by laying gas pipes in Broadway, on both sides of the street, from Canal street to the Battery. From these they were gradually extended over the southern part of the Island, though for years the city presented a checkered appearance, with one block dimly lighted by the ancient oil lamps and the next brilliantly illuminated from the works of the new gas company. In 1830 the improvement was extended to the northern part of the Island by the Incorporation of the Manhattan Gas Light Company, with a capital of $500,000, for the purpose of supplying the upper part of the city not included within the limits of the New York Company.

When gas was introduced into the city below Canal street opposition arose to the innovation. Many of the citizens were afraid to have it in or near their dwellings. All sorts of catastrophes were predicted. Had it not been for the sterling qualities possessed by Samuel Leggett, who introduced gas into his own residence in Franklin Square, and invited the public to witness the utility of the new source of light and comfort, its introduction would have been delayed longer. Leggett founded and was president of the first gas company in New York in 1823

It would not be proper to leave this subject without giving the opinion of an authority on the gas works as a “place of interest, an object of great importance, and highly curious in all its details.”

“The manner in which Broadway and many of the public buildings and shops in the principal streets are now lighted with gas,” says the record of 1829, “and the effect it has upon the eye of a stranger is as novel as it is [p.117] gratifying, and forms one of the principal modern improvements, especially when contrasted with the first attempt at lighting the streets made by our ancestors in 1697.

“The establishment for the making at gas is one of the largest edifices in the city, and is situated in Rhynder street, corner of Hester, near the east part of Canal street. The gas, formed from oil, is conducted into the great reservoirs, or gasometers, which contain each 5,000 barrels, and are equal in size to a large brewer's vat, being 60 paces in circumference and 20 feet in depth, The gas is measured by a curious machine called a meter, and passes out into all the principal streets south of Grand street through pipes of cast iron, of various sizes, from 6-inch to 2-inch bore, and by lateral pipe into the private houses, where the company pipes end, and the whole interior fitting is done at the expense of the person using the gas. The company supplies the public with all gas by the meter only. The charge for every cubic foot registered is $1. The meter is a patent machine made in London, and is sold or rented to each customer, as they may prefer, the cost being from $16 up, according to size,” For a ten light meter in the old days 44 cents a quarter was charged; fifteen light, 62½ cents; thirty light, $1.50. Those purchasing meters from the company kept them in repair at their own cost. Here is a scale showing the comparative quantity of light given out by each burner generally: The one jet burner gave a light equal to one mould candle; the two jet burner, 2 1-1/2 mould candles; the three, 4-2/3. A ten hole argand gave a light equal to ten mould candles. And here is an interesting end of the record: “By regulating the cock, the quantity at light given out, and, consequently, the gas consumed by each burner, may be reduced at pleasure. The comparative cost of the oil gaslight is considerably less than the cost of that produced from mould candles or from oil lamps. But the cleanliness, the beauty and the convenience of the gas over any other light is the principal cause of its being preferred, without reference to expense.”

In 1829 the company had laid fifteen miles of cast-iron pipes in the principal business streets. The pipes were imported from England, and were subjected to a severe proof to test their quality before being used. 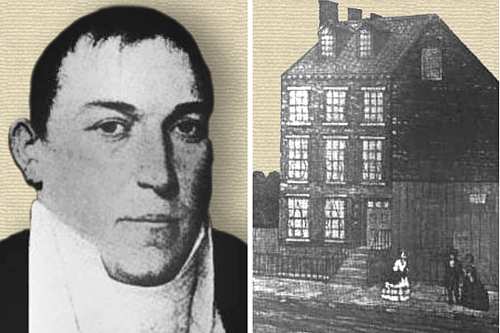 Samuel Leggett, first president of first gas company in New York, 1823. His city mansion home at No. 7, Cherry St., the first house in New York to be lighted by gas, as drawn in 1825. (source)