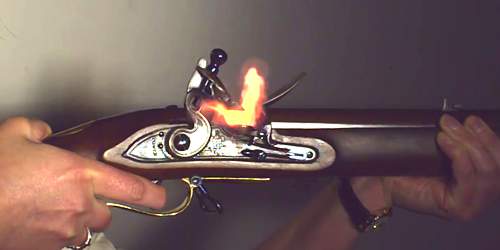 When the Cavaliers settled in Jamestown in 1607 and the Pilgrims landed at Plymouth in 1620, they brought with them firearms and gunpowder from England. The dangers of the new country and the difficulties and uncertainties of ocean traffic caused them to watch their stock of the latter with anxious care and to turn to means for producing it for themselves. Since there were no known natural deposits of saltpeter, the most important ingredient, they adopted the practice that had been in use in England since the early days of gunpowder and was then still in use, although importations from the East Indies were fast supplanting this process there. In this method vegetable and animal refuse containing nitrogen, the sweepings of slaughterhouses, weeds, etc., were collected into heaps in a shed or house where they were protected from the rain, and mixed with limestone, old mortar and ashes. The heaps were moistened from time to time with runnings from stables and other urine.

When decomposition was complete, the heaps were leached with water, the liquor evaporated, and the saltpeter recrystallized. As early as 1640 a saltpeter house was in operation in Boston, and in 1642 it was ordered1 to promote the public safety “by raising and producing such materials amongst us as will perfect the making of gunpowder, the instrumental means that all nations lay hould on for their preservation, etc., that every plantation within this colony shall erect a house in length 20 or 30 foote, and 20 foote wide within one-half year next coming, &c., to make saltpetre.” This was conformable with the practice required of citizens of London and Westminster (royal proclamation 1626) and of Sweden up to quite recent times when each peasant was required to have his compost shed or nitriary and to furnish to the state a certain quantity of saltpeter yearly, and when (proclamation2 of 1624) the paving of dove houses and cellars was prohibited, “in order that the growth of saltpeter might not be obstructed.” Later other colonies offered bounties for saltpeter, e. g., South Carolina in 1707, Virginia in 1745, and other colonies during the Revolution.

THE FIRST GUNPOWDER MILLS IN AMERICA

The first reference to the establishment of a gunpowder mill in America is found in an order of the General Court of Massachusetts1 which granted, on June 6, 1639, 500 acres of land at Pecoit to Edward Rawson “so as he goes on with the powder if the saltpeter comes.” The matter was brought up again in 1649, but the enterprise miscarried, as well as various other attempts. This was the period of household or “homespun” industries, when each household made most of the articles required in the primitive pioneer life, and there is little doubt but that some colonists added powdermaking to their accomplishments, or that a mill owner here and there made a little gunpowder with the waterpower at his disposal.

The General Court of Massachusetts at any rate encouraged such attempts, as may be seen from two orders passed in 1666. The first of May 23 recites that “whereas, there is necessity of having supply of gunpowder in this jurisdiction, and forasmuch as Sergt. Richard Wooddey, of Boston, in the county of Suffolk, and Mr. Henry Russell, of Ipswich, in the county of Essex, have been and are upon the work, and in preparation for saltpetre, for their future encouragement, or any other that shall appear to attend the promoting thereof, this Court doth declare and order that the said Richard Wooddey and Henry Russell are impowered to go on and proceed in the said work”; and then follow provisions giving them very large powers to facilitate their operations.

The second order, passed October 10 of the same year, provides that “whereas the Court hath encouraged and authorized some persons to make gunpowder, and have promised to enable them thereunto by such public and necessary orders as may conduce to the effecting of the same, the consideration whereof hath moved the Court hereby to order and enact, that the selectmen of every town (where the powdermakers authorized by this Court shall desire it) be authorized and required hereby to make and execute such orders in their respective towns as they shall judge meet, with the advice of skilful men, for increasing and procuring of saltpetre, and to impose such penalties as the selectmen shall deem meet, not exceeding ten shillings for one offence, upon all persons that shall neglect or refuse to perform such order or orders for the propagating and increasing of saltpeter in their respective towns; and moreover, the said selectmen are further impowered to choose and appoint an officer or officers, and to allow him a convenient stipend annually for his pains out of the fines or otherwise, to look to the executing such orders as they shall make in their behalf.” The order further provides fines, not exceeding five pounds for one offence, for such selectmen as failed to carry out the same.

But evidently none of these attempts at powder making were of any great importance or success until we come to the mill at Milton, Massachusetts.3 Milton had a particularly favorable location because the Neponset River, on the right bank of which it is located, was not dependent alone on the water of its watershed, but drew part of its supply from the Charles River through a trench or canal that had been dug by the settlers of Dedham in 1639-41, to reinforce the water power for their mill.

By deed dated August 21, 1673, “John Gill, of Milton, yeoman, in consideration of fourteen pounds, one shilling and sixpence, to him paid by the Rev. John Oxenbridge, pastor of the First Church in Boston, the Rev. James Allen, teacher of the First Church aforesaid, Robert Sanderson, deacon of the said church, John Hull and Freegrace Bendall,4 both of Boston aforesaid, merchants,” conveyed to these men a parcel of land in Milton “near the mill commonly called ‘Neponset Mill,’ containing thirty rods of ground in length along the Neponset River and six rods in breadth from the side of the said river up into the land next adjoining thereunto, and bounded northerly by the aforesaid river, and by the highway that leadeth from Boston to Braintree easterly, and by the land of the said John Gill southerly and westerly.” The deed also contains the provision that in times of scarcity of water John Gill shall have the benefit of all the water for twelve hours, and that the grantees may set down any mill except a corn mill.

On July 16, 1675, an agreement to build a powder mill on the site described was executed between Thomas Thatcher, Sr., James Allen, Humphrey Davie, John Hull, John Wiswall, Sr., Robert Sanderson, Mrs. Scott, executrix of John Oxenbridge, and Freegrace Bendall. Each of the partners contributed twenty-four pounds toward the enterprise, except John Wiswall, who had conveyed to the partnership, in place of a money contribution, a piece of land about eight and one-quarter acres in extent on the Dorchester (left) bank of the river and a little above the land previously described, by deed dated May 22, 1675. This deed was not recorded until 1699. The deed to the first piece of land was never recorded. Perhaps the purchasers did not want to disclose who the men in the undertaking were, as the home government in England frowned upon manufactures that would make the colonies independent of it.

Good progress was evidently made with the building of the mill, for in August 1675 Governor Leverett wrote to his friend Major Thompson: “We are upon a work for making powder and have erected a mill in order thereunto at Neponset, about six miles from Boston. Our difficulty will be for peter, which we must, in our beginning, have from without us, but hope, in time, may raise it amongst us.” The company built, in addition to the mill building which was on the original lot of ground, a house for workmen on the land on the Dorchester side which John Wiswall had contributed to the enterprise.

[All the original footnotes from the several pages have been gathered here, and renumbered accordingly. Some paragraph breaks added to improve readability.]
1 Records of the General Court of Massachusetts, quoted by J.L. Bishop, History of American Manufacturers (Philadelphia: Young, 1864), II, 23.
2 English.
3 References: A. K. Teele, History of Milton, Mass., 1640-1887 (Boston: Rockwell & Churchill, 1888), pp. 368-9; D. T. Huntoon, History of the town of Canton, Mass. (Cambridge, 1893); Horace E. Ware, The Powder Mill on the Neponset, its importance to the Colony in Phillip's War. (In Public Library, Milton, Mass.)
4 The grantees were all men of substance in the colony. Robert Sanderson was associated with John Hull in the melting, refining and coining of silver. John Hull was mint-master for several years beginning in 1652 and later the colony's treasurer (1676-1679). Freegrace Bendall was recorder of the county of Suffolk from 1673 to 1676, the year of his death.