A River Tunnel at Chicago 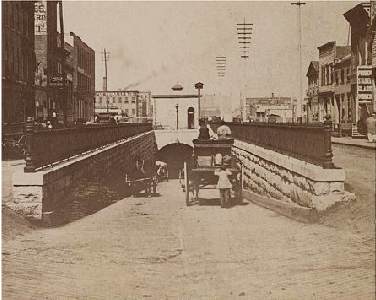 At a meeting of the Polytechnic Branch of the American Institute last night, Mr. Stetson exhibited a diagram of the tunnel under the river at Chicago, and gave an interesting account of its construction and present condition. He said that most persons confounded the two tunnels—the one under the lake and that under the river. The lake tunnel*, however, was filled with water and was merely a suction-pipe. The river tunnel, just completed, was 220 feet in length, and, with its approaches, 1,610 feet. It consisted of three arches, two for carriages and one for foot passengers. Each arch was thirteen feet in height and about ten feet in width. They were lighted by gas, floored with the Nicolson pavement, and presented quite a tasteful appearance. No difficulty had been experienced in regard to ventilation. In fact the draught through the tunnel was, if anything, rather too strong. The tunnel had been constructed by means of coffer dams and the open ditch plan. The top of the arches of the tunnel now formed the bottom of the river. Some difficulty had been experienced with regard to leakage, but that was gradually being overcome... In constructing the Chicago tunnel, and also the Thames tunnel in London, the workmen had only to deal with tenacious clay. The Chicago tunnel was an experiment, and, in his opinion, a successful one. Its cost he had not ascertained. The materials used in its construction were brick and stone...

[ * The lake tunnel was built to provide an intake for the city's water supply at a distance into the lake away from the sewage-polluted waters at the shore.]


Image, not in original text, shows an approach to the Washington Street Tunnel under the Chicago River, from a stereo viewer card of unknown date. Text excerpted from 'A River Tunnel at Chicago', New York Times (26 Feb 1869), 8.