[p.386] THE SIMPLON TUNNEL, as the longest tunnel in existence and one of the most difficult to make, deserves our special attention. It is a double tunnel with two parallel tunnels 56 feet apart from centre to centre, one for each track. At present only one tunnel is finished and in use, but a gallery for the other was driven right through and connected at intervals with the first by cross headings to assist in the transportation of materials and the ventilation of the workings. Operations commenced in November, 1898, and on January 25, 1906, the first train passed from Italy to Switzerland, with the King of Italy on board. The total cost of the completed tunnel and parallel gallery was £3,200,000, equivalent to £148 per lineal yard.

Fig. 203.Section of the Simplon Tunnel. The tunnel rises towards the centre to give drainage by gravitation

To make holes in the face for the blasting charges the Brandt rock drill was employed. This machine consists mainly of a small double-cylinder hydraulic [p.397] motor to rotate the drill proper, and a hydraulic ram to press the drill hard against the rock. The drill is a hollow tube with three or four cutting teeth at the end. The water escaping from the engine passes down the centre of the drill and keeps the edge cool, besides scouring away the debris. In hard rock this drill will sink a hole 39 inches deep in about twenty minutes.

Fig. 204.Cross and longitudinal sections of the Simplon Tunnel, showing a drift, c, and galleries or headings, a A, driven from the break-ups

Ten to twelve holes, distributed over the face of the drift, having been made, the charges and fuses were inserted and the floor of the drift was covered with steel plates from which the splintered rock could be shovelled very easily. The workmen then withdrew all tools and other things liable to damage by the explosion, and lit the fuses. Immediately after the discharge, a valve was opened in the tunnel and five jets of water allowed to play on the rock, to lay the dust and clear the air. Then all the debris was shovelled into trucks and taken away to give room to the drilling machines, and the roof and side walls examined with picks to discover any loose and dangerous fragments. The rate of advance in a drift with a section of 59 square feet averaged about 18 feet per day. On the Italian side, where the rock was hard and reliable “break-ups” were made every [p.388] 50 yards, and top-galleries driven from them in both directions. Fig. 204 shows a drift, c, from which break-ups have been made, and the galleries A A A driven right and left. The section (on the left) illustrates the timbering of the drift and galleries when first made, and the dotted lines the position of the intermediate ground, afterwards broken away. In Fig. 205 we have the fully-developed timbering of the tunnel, ready for the masonry. Steel “centres” were employed in the Simplon tunnel to support the [p.389] masonry arch during construction, as being more easily fixed and less damaged by frequent moving than wooden ones. 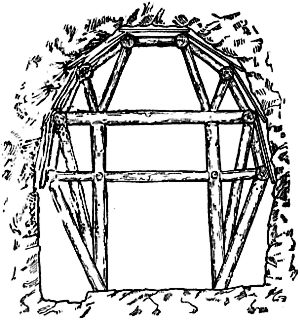 Fig. 205. Fully-developed timbering in the Simplon Tunnel, inside which the masonry lining is built. Polling boards are placed between the timbering and the ground.

During the piercing of the St. Gothard in the seventies no fewer than 800 of the workmen died, mainly through the lack of proper ventilation in the galleries, and for means of keeping down the dust raised by the drills. In the Simplon Tunnel the arrangements for ventilation were excellent, twenty-five cubic feet of fresh air being supplied to the workmen for every one blown into the St. Gothard. The current of air was strong enough, we are told, to take a man’s hat off; and as for the dust, it was kept down in the manner already described. It is satisfactory to be able to add that during the eight years of work on the Simplon, only 60 men lost their lives from all causes.

In the heart of a mountain the temperature is much higher than that of the outside atmosphere, the heat increasing with the depth of the rock overhead. The maximum rock temperature—133° Fahrenheit— in the Simplon Tunnel was encountered at a point about 7,000 feet below the summit of the mountain. [p.390] This would have made things intolerable for the workmen had it not been tempered by huge quantities of cool air driven by fans through large pipes up to the face, and by water-sprays from pipes jacketed with charcoal, to prevent the water becoming heated during its passage up the tunnel.

Towards the end of 1901 the advanced gallery on the Italian side pierced a soft stratum, which crushed heavy timbering like so much matchwood. The way was cleared out again, and steel girders used in conjunction with wooden baulks 20 inches square. Even these yielded under the pressure. As a last resource the spaces between the beams were filled in with quick-setting concrete, which stood the strain while a very thick masonry lining was built, in spite of great difficulties, inside the temporary support.

As a result of this delay the Swiss got well ahead of their Italian rivals, and reached the centre point while the latter were still working their way uphill. In order to save time, they decided to drive the galleries downhill towards Italy to meet the other party. Then they unfortunately tapped some extremely hot springs, which ultimately compelled them [p.391] to retire, after having fixed strong iron doors in the headings to hold back the water.

The work was now definitely stopped on the Swiss side, and some people prophesied that the completion of the tunnel was impossible. But the Italians pushed on, and at last listeners in the Swiss heading heard their drilling-machines at work, though half a mile of rock remained to be penetrated. Hopes revived. Then the Italians met the hot springs that had given the Swiss so much trouble, and in spite of all efforts to keep down the temperature by mixing cold water with the hot, work on the main tunnel had to be stopped. The engineers refused, however, to own themselves beaten, and continued the gallery of tunnel No. 2, with the object of getting round the flank of the springs, which, owing to the nature of the rock, they were fortunately able to accomplish. Then they drove a cross-cut to the line of tunnel “No. 1, and worked back till they met the abandoned heading, and so were enabled to push on with greater vigor than ever. On February 23, 1905, only 5 metres of rock remained unpierced; and next morning a blasting charge released the hot water imprisoned behind the iron doors in the Swiss heading. “The meetings of the headings at once [p.293] proved the accuracy with which the work had been executed, but it lacked the fervor of delight usual on such occasions, as in this case it was a meeting of miners on the one side and hot water on the other. The last 245 metres of the gallery had occupied nearly six months in execution, owing to the unprecedented difficulties encountered.*

The headings met with an error of but 8 inches laterally and 3½ inches vertically. The total length was found to be 31 inches less than had been anticipated. Considering that these errors are distributed over 12-1/3 miles, their smallness is remarkable.

By a noteworthy coincidence the Simplon Tunnel was opened almost exactly a hundred years after the completion of the military road over the Simplon Pass by Napoleon—the first to promote the interests of peace and civilization, as the second was to make easier the passage of invading armies.

Trains are hauled through the tunnel in 18 minutes ( = 42 miles an hour) by electric locomotives. Tunnel No. 2 is being enlarged by Messrs. Brandt, Brandau and Co., the contractors for the first, and in due course the second track will be laid.

* F[rancis] Fox on the Simplon Tunnel, “Proceedings of the Institution of Civil Engineers.”