The Inventor of Saccharine 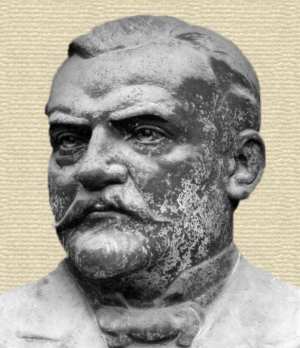 A representative of the American Analyst called on Dr. Constantine Fahlberg, the inventor or discoverer of saccharin, the new coal tar sugar, and had a long talk with him about his new discovery. The doctor is a tall, well built, handsome German-American of about thirty-eight years of age. He speaks the modern languages fluently, and despite the celebrity that has so suddenly fallen on him, is quite diffident and reserved.

“How did I discover saccharin?” he said. “Well, it was partly by accident and partly by study. I had worked a long time on the compound radicals and substitution products of coal tar, and had made a number of scientific discoveries, that are, so far as I know, of no commercial value. One evening I was so interested in my laboratory that I forgot about my supper till quite late, and then rushed off for a meal without stopping to wash my hands. I sat down, broke a piece of bread, and put it to my lips. It tasted unspeakably sweet. I did not ask why it was so, probably because I thought it was some cake or sweetmeat. I rinsed my mouth with water, and dried my moustache with my napkin, when, to my surprise the napkin tasted sweeter than the bread. Then I was puzzled. I again raised my goblet, and, as fortune would have it, applied my mouth where my fingers had touched it before. The water seemed syrup. It flashed on me that I was the cause of the singular universal sweetness, and I accordingly tasted the end of my thumb, and found it surpassed any confectionery I had ever eaten. I saw the whole thing at once. I had discovered some coal tar substance which out-sugared sugar. I dropped my dinner, and ran back to the laboratory. There, in my excitement, I tasted the contents of every beaker and evaporating dish on the table. Luckily for me, none contained any corrosive or poisonous liquid.

“One of them contained an impure solution of saccharin. On this I worked then for weeks and months till I had determined its chemical composition, its characteristics and reactions, and the best modes of making it, scientifically and commercially.

When I first published my researches, some people laughed as if it were a scientific joke, others, of a more skeptical turn, doubted the discovery and the discoverer, and still others proclaimed the work as being of no practical value.

“But when the public first saw saccharin, everything changed. The entire press, European and American, described me and my sugar in a way that may have been edifying, but was simply amusing to me. And then came letters. My mail has run as high as sixty a day. People wanting samples of saccharin, my autograph, or my opinion on chemical problems, desiring to become my partner, to buy my discovery, to be my agent, to enter my laboratory, and the like.

“What have I done? I have started a company in Germany to manufacture saccharin, with a capital of 2,000,000 marks. They are already at work, and are now producing the new sugar. It costs, or rather we sell it, between $10 and $12 per pound, but will reduce these figures considerably before a year has passed. I would rather have started in this country, which is my home, but the high price of skilled labor, and the high tariff on the crude materials (fine chemicals) of which saccharin is made, deterred me and my friends from so doing. If applied chemistry continues progressing as it has done in the past decade, we shall open branch works here within the next five years.”

Saccharin is proving a wonderful success. It is used already in many ways. Prof. Leyden, of Berlin, recommended it to sweeten fine wafers and other foods for invalids, and wrote a formula for it in such cases. This is used by bakers and confectioners, and more specially by Mannl & Co., the great wafer manufacturers of Carlsbad, Bohemia. It is also employed by the makers of glucose and beet sugar. These are inferior in sweetness to cane sugar, but superior in digestibility and healthfulness. The addition of a fraction of saccharin makes them the equals of the finest cane sugar in the market. Saccharin is so sweet that two or three teaspoonfuls converts a barrel of water into syrup. A small wafer of it converts the bitterest quinine solution or acid drink into a regular molasses. It will therefore be invaluable in disguising and destroying all the bitter and sour tastes in medicine without changing the character or action of the drugs.

Saccharin does not decay, mold, or ferment, neither is it attacked by bacteria. It has no injurious effect; what effect has been noticed is rather beneficial. This immunity from decay will render it of great utility in pickling and preserving delicate vegetables and meats. Where sugar is used as a flavor and not as a food, there, I think, it is bound to be replaced by saccharin; where, as a food and flavor combined, it will not be. In the future the new sugar will be used by druggists, physicians, bakers, confectioners, candy makers, preserve and pickle makers, liquor distillers, wine makers, and dealers in bottlers' supplies.

THE FORMATION OF SACCHARINE.

The new coal tar product, saccharine, which is expected to prove very useful on account of its sweetening power—in respect of which it stands to cane sugar in the ratio of 220 to 1, and with which considerable antiseptic properties are combined—was mentioned at length by Sir Sydney Roscoe in a recent discourse at the Royal Institution. This new substance was described by the lecturer as perhaps the most remarkable of all the marvelous products of the coal tar industry. It is not a sugar, but contains carbon, hydrogen, sulphur, oxygen, and nitrogen; and its chemical name is benzoyl sulphuric imide. It is neither a nutrient nor a poison. It is derived from the toluene of coal tar, by a process comprising at least seven distinct steps; the whole contributing a triumph of synthetical chemistry. Toluene is first heated with sulphuric acid of 168½° Twaddell, but not above 100° C. After all the original toluene has disappeared, the mixture is run into wooden tanks partly filled with cold water, where it is stirred up with chalk. The mass thus neutralized is filtered through a press; and the calcium salts are treated with sodium carbonate, with another filtration following. The solution of the sodium salts thus obtained is evaporated, and the solid residue dried by steam heat. This material is then mixed with phosphorus trichloride, and treated with a current of chlorine. Certain residuals are then driven off, and the apparatus contains two sulphonic chlorides—one solid and the other liquid. Only the latter is capable of yielding saccharine. This is now separated, mixed with solid ammonium carbonate, and steamed. After some further mechanical treatment, the liquid is oxidized by potassium permanganate; and, finally, the pure saccharine is precipitated by dilute mineral acids. It has a far sweeter taste than sugar, and a faint, delicate flavor of bitter almonds.