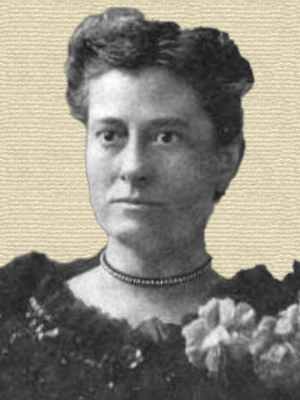 [p.314] Williamina Paton Fleming was born in Dundee, Scotland, on May 15, 1857. Her parents were Robert and Mary (Walker) Stevens. Her education was obtained in the public schools of Dundee, where, at the age of fourteen, she was one of the pupil-teachers which were a part of the training used there at that time. After her marriage in early womanhood to James Orr Fleming, they came to this country and settled in Boston. In 1881, Mrs. Fleming, finding it necessary to support herself, entered Harvard College Observatory as a copyist and computer. It was on the eve of the development of a new and remarkable method of attacking astronomical problems; for celestial photography, which had been experimented with for several years, was about to be seriously undertaken at Harvard by the director of the observatory, Professor Edward C. Pickering. By placing a prism in front of the object-glass of the telescope, the spectra of all the brighter stars were obtained. Thus an almost untrodden field lay open for the investigator, a field that was destined to produce a vast amount of material for the astronomical discussions of the future. As the work progressed, Mrs. Fleming was put in charge of the original examination of the photographic plates, their care and storage, and the classification of objects found upon them. Gifted with great keenness of vision and a clear and logical mind, she at once gave evidence of ability for the work. Each photographic plate may be likened to the only existing copy of a valuable book, and, being very fragile, must be safely stored, and at the same time must be accessible, so as to be consulted readily at any moment. When a sufficient amount of material was at hand, the first general photographic classification of stellar spectra was undertaken, and was assigned to Mrs. Fleming. The results are published in the “ Draper Catalogue,” which forms Vols. XXVI and XXVII [p.315] of the Harvard Annals, and gives the spectra of 10,351 stars, with measures of their photographic light. She observed, in classifying these spectra, that while a large proportion of them fall in classes resembling a few typical stars, there are also many that are peculiar. By the presence of bright lines in their spectra, she thus discovered ten Novae, and more than three hundred stars that vary in light. In the early days, when celestial photographs were rare, and some of these discoveries were attributed by skeptics to defects on the film, she never doubted the validity of the photographic evidence. Her industry was combined with great courage and independence.

She also found fifty-nine gaseous nebulae, ninety-one stars of the fifth type, Class O, and sixty-nine stars of the Orion type having bright hydrogen lines. She became interested in the red stars, whose spectra are of the fourth type, Class N, and appear very short on photographs taken with the objective-prism. Other spectra which resemble those of Class N, in the region between Hβ and Hγ, but which contain as much blue light as stars of the second type, she assigned to a new type called sixth type, or Class R. Just before her life-work was suddenly ended, she was engaged upon a portion of the Annals, called “Peculiar Spectra,” which gives tables of all these objects with descriptions of their peculiarities. This is nearly all in print, and it is hoped it will soon be finished.

In a “Photographic Study of Variable Stars,” Vol. XLVII of the Annals, Mrs. Fleming gave the results of her laborious work in measuring the position and magnitude of sequences for observing two hundred and twenty-two of the variable stars she discovered. Most of these variables were found by the presence of bright hydrogen lines, traversing a banded spectrum of. Class M. This combination of lines and bands, which she called Md, was always an object of interest to her, and was considered as a certain evidence of the star’s variability. She gave much attention to this class of spectrum, and divided it into eleven subclasses, depending upon the relative brightness of the hydrogen lines and the position of the maximum intensity of the continuous spectrum. A large part of her time was spent upon the preparation of the numerous [p.316] volumes of the Harvard Annals for the printer, and her power of grasping facts quickly and clearly was useful in final readings and corrections of copy and proof.

Mrs. Fleming’s health had been impaired for several years, but her great natural vitality and courageous spirit had sustained her through trying illnesses. Early in May she was evidently not so well as usual, and some days later, she went to a hospital for rest. Her condition was soon found to be critical, and pneumonia developed, which proved fatal on May 21, 1911. She left one son, Edward P. Fleming, who graduated as a mining engineer from the Massachusetts Institute of Technology in 1901, and is now chief metallurgist for a large copper company in Chile.

Mrs. Fleming was possessed of an extremely magnetic personality and an attractive countenance, enlivened by remarkably bright eyes. Although most of her life was spent in the routine of science, yet her human interests were numerous. Fond of people and excitement, there was no more enthusiastic spectator in the stadium for the football games, no more ardent champion of the Harvard eleven. Industrious by nature, she was seldom idle, and long years of observatory work never unfitted her for the domestic side of life. As much at home with the needle as with the magnifying eyepiece, she could make a dainty bag, exquisitely sewed, or dress a doll in complete Scotch Highland costume. She was never too tired to welcome her friends at her home or at the observatory, with that quality of human sympathy which is sometimes lacking among women engaged in scientific pursuits. [p.317] Her bright face, her attractive manner, and her cheery greeting with its charming Scotch accent, will long be remembered by even the most casual visitors to the Harvard College Observatory.