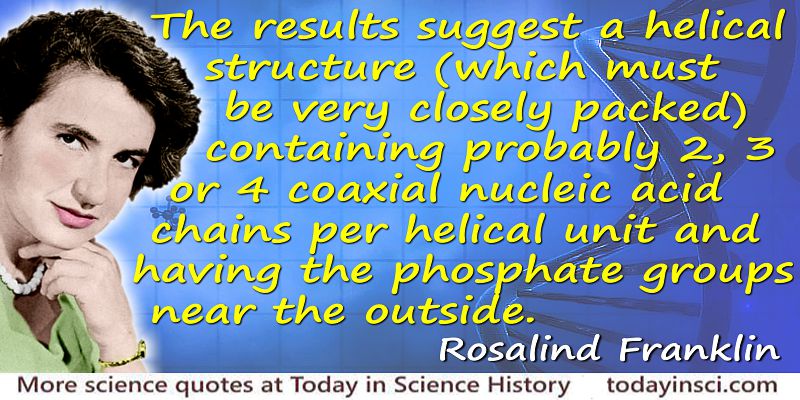 “The results suggest a helical structure (which must be very closely packed) containing probably 2, 3 or 4 coaxial nucleic acid chains per helical unit and having the phosphate groups near the outside.”
— Rosalind Franklin
Report (Feb 1952).

This quote comes from Rosalind Franklin’s part of the King’s College, London, Biophysics Unit report to the Medical Research Council in 1952.

Franklin had been working with X-ray crystallography since 1947 at the Central State Chemistry Laboratories in Paris, and had been recruited in 1951 to the Medical Research Council Biophysics Research Unit at King’s College, London, for a study of the DNA molecule structure that was in progress there. She joined the work with graduate student Raymond Gosling making and improving X-ray diffraction images of DNA. By May 1952, she had a good long-exposure photograph showing a distinct X shape filling the image which indicated the double helix backbone. In her section of the 1952 King’s MRC report, Franklin gave quantitative measurements for the interphosphate distances and discussed the external placement of the phosphates.


Text by Webmaster, with quote from report to the Medical Research Council, submitted in Feb 1952, as given in Anne Sayre, Rosalind Franklin and DNA (2000), 126. (source)