“The science of beauty”

This page is a correction for an earlier page which, by error, credited the quote to Joseph Paxton. The confusion was caused by a search result found for a Google Book with an incorrect cover image showing Joseph Paxton as author. That cover image was incorrectly shown for what was actually a book by “Peter Parley,” but that was the pen name of Samuel Griswold Goodrich. 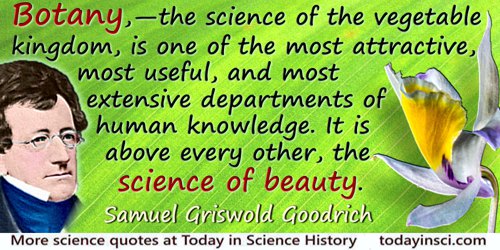 “Botany,—the science of the vegetable kingdom, is one of the most attractive, most useful, and most extensive departments of human knowledge. It is, above every other, the science of beauty.”
— Samuel Griswold Goodrich
using pseudonym of Peter Parley in Peter Parley's Cyclopedia of Botany (1838).

Samuel Griswold Goodrich was an American 19th century publisher of magazine and almanacs. Under the pen name of Peter Parley, he was a prolific best-selling author. His titles for children covered a wide range useful information topics. His 170 titles accumulated approximately 12 million books sold.

In 1838, Goodrich published Peter Parley’s Cyclopedia of Botany: Including Familiar Descriptions of Trees, Shrubs and Plants. With over 300 pages, the volume began with an Introduction and a chapter giving an explanation of the classification of plants, and terms used to describe them. Most of the book was given to a Dictionary of Plants. The author aimed to “lure the youth of our country more frequently to the forest and the field, and teach them to look with deeper interest into their vegetable mysteries.”

Goodrich begins Chapter 1, reflecting on the importance of vegetation to an appealing landscape:

“Botany,—the science of the vegetable kingdom, is one of the most attractive, most useful, and most extensive departments of human knowledge. It is, above every other, the science of beauty. There are few plants, which are not beautiful, considered as separate individuals, and in all the parts of their individual organization; and there is a beauty in the grouping of plants, whether as grouped by nature, or by skilful art, to which there is nothing equal in that of any of the other productions of nature. The landscape is the object which mankind most generally admire; and the landscape owes its principal, if not its only charms, to its vegetation.

“Rocks have, no doubt, their grandeur, and there is a beauty in running waters, and even in placid lakes; but, let the rock be naked of vegetation down to and around its base, and its grandeur is painful,—it seems a ruin.”