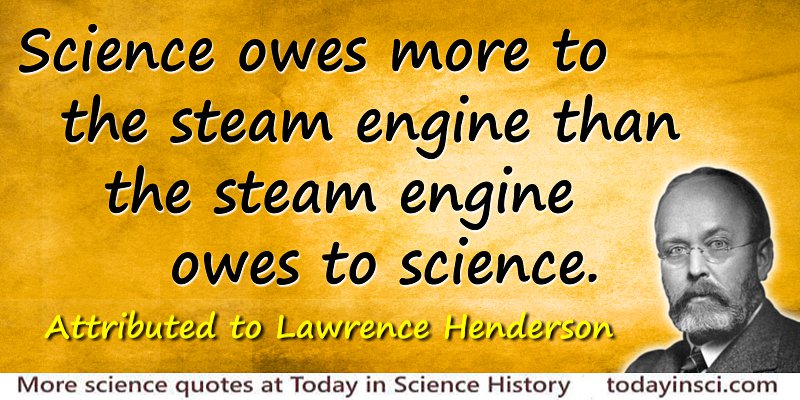 This is one of those irksome quotes that one book of quotations cites as “Attributed.” That usually means the quote is snappy enough to be noteworthy, is difficult to track back to a reliable source, but used widely enough to still earn a place in a collection. Checking for its origin, Webmaster has found numerous examples introducing the quote with weasel-words such as “it has been said.” These are most frequent in recent years, presumable because of the viral effect of search engine results, and the quote continues to be propagated without source citation.

The quote does appear in print prior to the age of the internet, at least as early as 1960 in a book by science historian, Charles Coulston Gillispie, The Edge of Objectivity: An Essay in the History of Scientific Ideas. He presents this quote on page 357, as “Henderson’s famous quote,” but without source citation. Several other examples helpfully assign the year 1917 to the quote, but still with no further source citation.

A few examples re-clothe the quote using the more specific “thermodynamics” in place of “science.” This would be a nod to the presumed meaning of the quote that to improve the technology and build more efficient and powerful steam engines, scientists investigated the fundamentals involved. This included the Carnot cycle, the most efficient heat engine cycle allowed by physical laws, which led to the second law of thermodynamics. Then all the fundamental insights gained for science led to wider applications. Thus the steam engine served as a stimulus, but was only one beneficiary among many other developments in technology.


Text by Webmaster, with quote as Attributed, perhaps 1917.