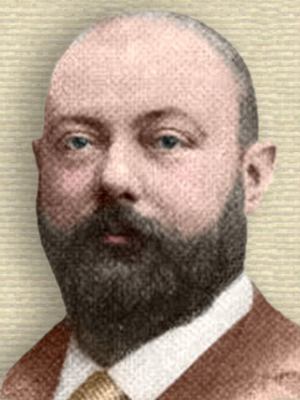 Paul Héroult, the famous pioneer of the electrometallurgy of aluminium and steel, died in Paris on May 9, at the age of only fifty-one years. He had been in poor health for the last few years, suffering from kidney trouble, yet to his many friends on this side of the Atlantic the news of his death came as a sudden unexpected shock.

Paul Louis Toussaint Héroult was born at Thury-Harcourt (Calvados, Normandy) on April 10, 1863. Since his grandfather lived in England he spent his youth’s happy days partly in France and partly in England. He was educated at the Lyceum of Caen, Normandy, and later at St. Barbe in Paris, where he graduated in 1882, to enter the Paris School of Mines (Ecole des Mines). From 1883 to the beginning of 1884 he served in the French army and then returned to the School of Mines, but on account of the death of his father he was soon forced to quit his studies in order to conduct the business of his father’s tanning works.

However, Héroult continued there his metallurgical researches. He was particularly interested in the electrochemical production of metals. He bought a small Gramme dynamo of 1.5 hp, which he replaced in 1886 by another small machine giving 800 amp at 15 volts. This machine was especially built for his aluminium process, for which he had applied for patents in the same year. In 1887 he became technical manager of the Neuhausen aluminium works of the Swiss Metallurgical Company, where his process is in use up to the present. He then started an aluminium plant in France, at Froges, Isere, for The Societé Electrometallurgique Francaise. About the same time he made two trips to this country, where meanwhile, independently of, and simultaneously with him, Charles M. Hall had worked out what was essentially the same process for electrolytic reduction of aluminium and had started the works of the Pittsburgh Reduction Company.

After his return to France, Héroult assumed the management of the Froges works, but after the erection of a larger water-power plant in La Praz, Savoy, he became general manager of these new La Praz works. In 1892 the power developed at La Praz was 3000 hp, which was increased to 13,000 hp in 1895.

Héroult’s aluminium furnace, which by the addition of a tap hole was rendered a continuous apparatus, became in his hands the instrument for numerous further researches. In it he made the first commercial calcium carbide produced in France. In it he undertook for the Societé Electrometallurgique de Froges, the manufacture of artificial corundum, ferrosilicon and ferrochrome, and thus he was led to the researches on the use of the electric furnace in the iron and steel industry to which the balance of his life was chiefly devoted.

In 1904 Héroult came again to the United States to attend the St. Louis World’s Fair, and since that time he resided alternately in this country and in France. The American rights of his electric steel furnace which made rapid progress in Europe, were acquired in 1910 by the United States Steel Corporation. With respect to the reduction of iron ore in the electric furnace, Héroult assisted Dr. Haanel’s Canadian government investigation at Sault Ste. Marie and also helped in the early work of the Noble Electric Steel Company at the place named in his honor, Héroult-on-the-Pit in Shasta County, California. He later became consulting engineer for the new works of the Southern Aluminium Company, in course of erection at Whitney, N. C, but his failing health forced him to retire. He went to Paris, where he lived the last few years. He was married twice and leaves a widow and five children.

Especially through his connection with the aluminium industry Héroult accumulated a very considerable fortune. Many honors were bestowed on him; the Institute of Technology of Aachen, Germany, conferred on him the honorary degree of Doctor of Engineering; France gave him the red ribbon of the Legion of Honor and the Grand Lavoisier Medal. He had many ardent friends in this country and was a member of the American Electrochemical Society and The Chemists’ Club. At the meeting of the New York Sections of the American Electrochemical Society, the American Chemical Society and the Society of Chemical Industry, held on May 22, Dr. C. A. Doremus spoke as follows in proposing a resolution in honor of Héroult’s memory:

“Voyagers of old made new maps of the earth. Héroult, the pioneer in metallurgy and engineering, has staked out newfields for his successors to develop. The visions of linking the two great oceans across the Isthmus have only been realized after centuries, but in the span of a quarter of a century Héroult brought to successful practice two epoch-making discoveries. Nor did he rest content with these.

“He showed us how to release aluminium from the bondage in which it has been held for geologic eons; he utilized it in the arts; he gave it to us for the treatment of steel and then carrying forward his intelligent use of the electric current not for electrolysis this time, but for thermic results, has founded a new art in the purification and treatment of the metal for which his age is named.

“Héroult was original, imbued with the ardor characteristic of youth, he was intrepid, resourceful, persistent, and reduced his inventions to practice, in ways that brought him international recognition. And then what a man!

“Whoever had the good fortune to meet him must have been impressed with his modesty, yet also with his latent power; with his cosmopolitanism, yet pride in his native land; and above all with that genial nature that endeared him to his friends and to professional brothers.”

A resolution was adopted conveying to the widow and children the most heartfelt sympathy of the members of the three societies and the assurance of their esteem and affection for Héroult as a man, their gratitude to him for the wonderful inspiration he gave to all, working as he did for science and industry.