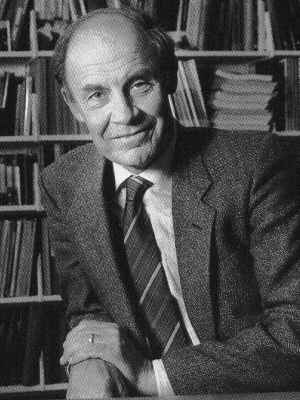 He developed the method of crossed molecular beams, directed and well-defined fluxes of molecules, to and beyond the point where detailed studies of chemical reactions have been possible. Working with others, he elucidated the mechanisms of chemical reactions, detailing the sequence of events and energy release.

Prior to his work, any fundamental understanding of what molecular features influence the rate of chemical reactions had been slow in developing. Whether a chemical reaction takes place, the colliding molecules often requires some special property such as high velocity or large internal energy. However, the directions and velocities of the molecular motion in a gas or a liquid are mainly random. Consequently, the collisions between the molecules are ill-defined as regards, for example, the kinetic energy in the collision. The details of the reaction thus become blurred and cannot be observed precisely enough. 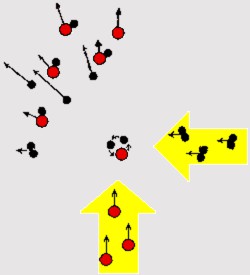 Two directed molecular fluxes are shown (idealized molecular beams). Where they cross, a reaction can take place and new molecules can form. In this example, oxygen atoms (red) react with hydrogen molecules (black), and form a long-lived complex, which is an energy-rich and thus unstable water molecule. Each complex dissociates finally to a hydrogen atom and a hydroxyl radical (departing top left). (source)

In 1959 Herschbach found It was finally found possible to solve the problem by using molecular beams formed of directed and spatially well-defined molecular fluxes of low density, often also with well-defined velocities, rotational and vibrational energies. When two molecular beams are caused to cross each other, the details of the reactions between molecules can be studied from the angular distribution of the products from the point of collision, and their rotational and vibrational energies.

Herschbach first used this technique to study the chemical reaction between potassium atoms and methyl iodide molecules. The crossed molecular beam technique has since become one of the most important advances within the field of reaction dynamics, with others advancing the experimental applications in other systems (Yuan T. Lee).

He took part in the development of this method almost from the start. His extremely important achievements concerned for example studies of short-lived direct reactions, especially of the two main types, the “rebound” and the “stripping” reaction. He supplemented the commonly-used procedure of detecting the product molecules by deflecting them in magnetic and electric fields, thus circumventing one of the largely-overlooked problems inherent in the early experiments.

Professor Herschbach has published over 350 research papers. The research of Professor Dudley Herschbach and his group aims to elucidate the molecular dynamics of chemical reactions and the underlying forces, both in single-collisions and in condensed phases. Currently, his research is devoted to molecular beam studies of reaction stereodynamics, intermolecular forces in liquids and a dimensional scaling approach to electronic structure.