as outlined in 'Scientists and Society' (1954)
by E.M. Hildebrand 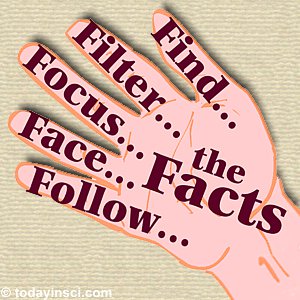 In the twenties the late Dr. Glenn Frank,* an eminent social scientist, developed a new statement of the scientific code, which has been referred to as the “Five Fingers of the Scientific Method.” It may be outlined as follows:

It is about time scientists acknowledge that there is more to the scientific convention than the material aspect. Returning to the fourth and fifth fingers of Dr. Frank's conception of the scientific method, the facts should be faced by the proper interpretation of them for society. In other words, a scientist must assume social responsibility for his discoveries, which means that he must have a moral motivation. Finally, in the fifth definition of the scientific method, the facts are to be followed by their proper application to everyday life in society, which means moral motivation through responsibility to society.

In practice, Dr. Frank pioneered and promoted an Alumni Research Foundation in his institution to face and follow the facts of discovery of vitamins by protecting society from exploitation through malpractice of scientific facts or knowledge. ...

[* Glenn Frank was editor of the Century Magazine from 1921, whose articles included economics, political science and sociology. In 1925, he became president of the University of Wisconsin, where he initiated its famous Experimental College. From 1927 he was active in the Republican party. His political activities caused him to be dismissed (Jan 1937). He then became more involved in Wisconsin politics, until his death in a car accident (15 Sep 1940).

Image by webmaster based on clipart of hand. Original text was a single paragraph; breaks and indents were added by webmaster to improve readability. Excerpt from: 'Scientists and Society', American Scientist (Jul 1954), 42, No. 3, 495. (source)] 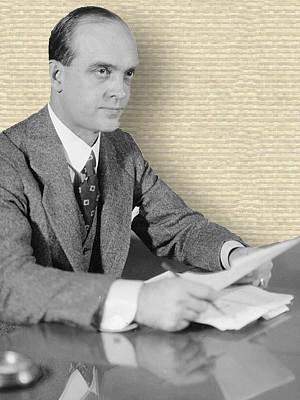 from The Wisconsin Alumni Magazine (Feb 1926)

THE first annual Matrix Table of the Wisconsin chapter of the professional journalistic sorority of Theta Sigma Phi was held at the Hotel Lorainc on January 9. …

“Journalism must find the facts,” said President Glenn Frank, “it must not prejudge things in terms of conservatism or liberalism or radicalism; it must not decide in advance that it is to be conformist or non-conformist; it cannot fly in the face of facts without courting ultimate disaster.

“Journalism must filter the facts; it must with conscientious care separate the facts from admixtures of prejudice, passion, partisanship, and selfish interest; facts that are diluted, colored, or perverted arc valueless as a basis for action.

“Journalism must face the facts; it must learn that the energy spent in trying to find ways to get around, under, or over the facts is wasted energy; facts have a ruthless way of winning the day sooner or later.

“Journalism must follow the facts; journalism must say of facts as Job said of God: though they slay us, yet shall we trust them; if the facts threaten to upset a paper’s cherished policy, it always pays the journalist to re-examine his policy; that way lies realism, and realism is the ultimate good.”


Although Webmaster has not yet found an original source for Glenn Frank applying his five-finger method to science, this excerpt does give it, in his own words, applied to journalism. (He was familiar with this field, because his early career included a number of years writing for, and editing the Century Magazine.) Text from: Robert S. Crawford, (ed.)The Wisconsin Alumni Magazine (Feb 1926), 27, No. 4, 101. (source)