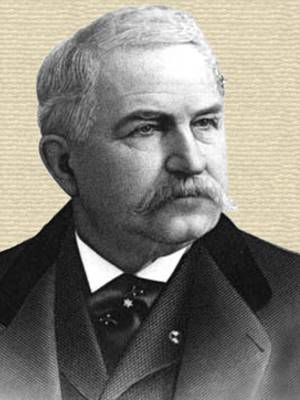 [p.4] [T]he crowning glory of the advancements made of late years by the Long Island College Hospital is the Hoagland Laboratory, now in process of construction directly accross the street from the main building. When completed, which it is confidently expected will be early next February, there will be no building in the country devoted to laboratory purposes that will present a fairer or more artistic exterior, as can be readily seen from the accompanying picture. The intention was, that the new laboratory should be opened to the students at the beginning of the present session, but unexpected and harrassing complications arose which put the work back at least four months. These difficulties have all been overcome and Brooklyn will soon have a laboratory which cannot be surpassed for beauty, spaciousness and complete adaptability to the purposes for which its designed, by any laboratory in the world.

The Hoagland Laboratory is the gift of Dr. C. N. Hoagland, an eminent physician of Brooklyn and a member of the Board of Regents of the Hospital, and is erected on his property. It will be under the direction of Dr. George M. Sternberg, Surgeon of the United States Army, a man whose scientific reputation is world-wide. Every means that can contribute to perfection in scientific investigation will be brought into practical use. Research in all the important departments of the study of medicine, especially in histology, physiology, bacteriology, pathology and photography, will here find help in the most approved apparatus and appointments.

The Hoagland Laboratory will consist of five stories and a basement, in which the various rooms and departments are distributed as follows:

In the basement is the animal pen, where the members of the brute creation will comfortably await their glorification at the hands of science. The rest of the basement is devoted to the main cellar, the coal cellar, boiler room, hot water tanks, etc.

The chief feature of the first floor is the large lecture hall, seating two hundred and fifty persons, and provided with comfortable arm-chairs, having the additional luxury of a swinging writing-desk attachment. The entrance to the building is on this floor through the porch shown in the picture. The hall runs clear to the further side of the building and at the rear end there is an elevator. The office and library are at the right of the hall and occupy the whole depth of the building.

At the northeast corner of the third floor is Dr. Hoagland's private room. The greater part of this floor is occupied by the bacteriological laboratory, with rooms for incubators and other necessary apparatus, private work-room and main work-room. There is a large museum at the west side of this floor.

The fourth floor is mainly devoted to two photographic rooms, two dark rooms, a photographic laboratory, and five small laboratories, each completely isolated from every other room, where work may be done in perfect seclusion by physicians or others who desire to pursue special lines of investigation. The rest of this floor has the kitchen, living room and two chambers for the janitor and his family.

The fifth floor is taken up by one large work-room. 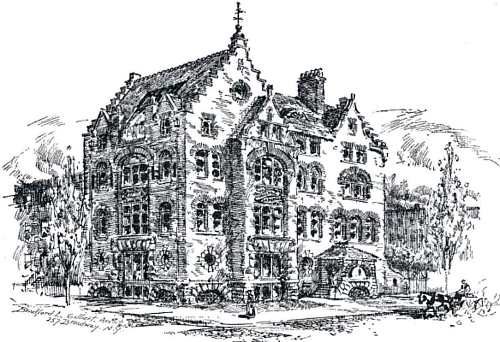 The walls of the Hoagland Laboratory are rising rapidly. Already the workmen are laying the courses of the third story, and it is but a short while to the time when the finishing and fitting will be going on in the interior. The delay has been a hard burden to bear, but the work in progress seems to be a gentle sort of stimulant for the [Long Island College Hospital ] students, for they come from the lecture-rooms looking just a little haggard, and go to the windows or doors and look over at the bricks and the blocks of brown stone which the workmen are so artistically combining, and then as they think of the opportunities they will soon have across the way, their faces brighten, and they return to their classes with renewed hope, and confidence.

[p.396]  … The lectures on physiology, histology and pathology are now given in the Hoagland Laboratory, and all the practical instruction in the microscope is given in the same building. …

The trustees of the Hoagland Laboratory have announced the completion of the laboratory and its equipment for practical work. Special facilities are offered to those who desire to prosecute original research. For this purpose private laboratories have been provided, and arrangements are now being made for the purchase of a library which shall contain all the literature necessary for reference in the departments of bacteriology, physiology and pathology.

Owing to the absence in the South of Dr. George M. Sternberg, the Director, in the further prosecution of his investigations into the cause of yellow fever under orders from the President of the United States, the course of lectures on bacteriology, already announced, will be postponed until his return, which will probably be in November.

The further announcement is made that the services of Geo. T. Kemp, Ph.D., Johns Hopkins University, have been obtained as Associate in Bacteriology and Physiology, and that, with his assistance and under the direction of Dr. Sternberg, practical instruction in bacteriology will be given during the winter and spring. Inasmuch as Dr. Kemp will [p.397] be at the laboratory daily from 9 A. M. until 5 P. M., this instruction can be taken at any time during these hours.

The apparatus which has been provided for this course is of the best, and is a duplicate of that which is now in Koch's laboratory; it has recently arrived from Berlin. The microscopes are of the Leitz pattern and are provided with the Abbé condenser and one-twelfth inch oil-immersion lenses. A full set of cultures has been obtained, some from Koch's laboratory and the others from the pathological laboratory of Johns Hopkins University.

The fee for this course of instruction has been placed at $15, which entitles the subscriber to prosecute his studies until June 1, 1889, during as many hours of the day as he may desire.