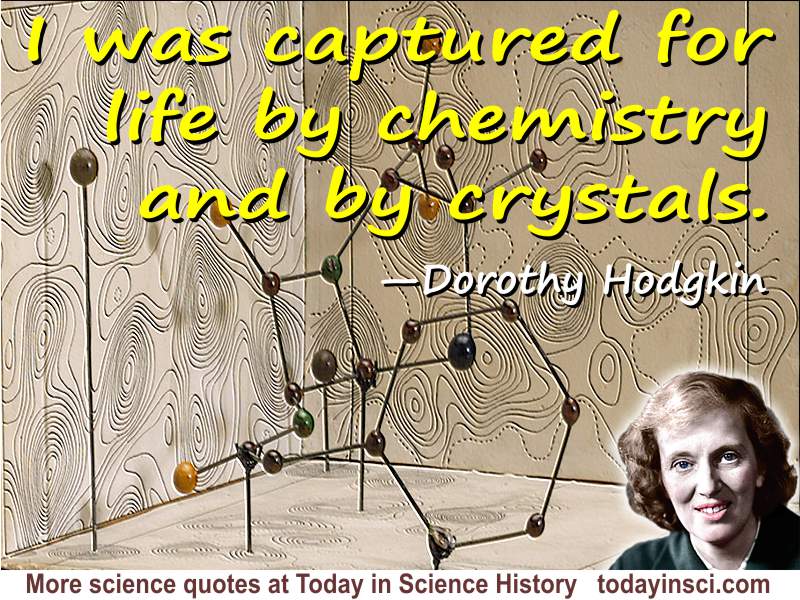 “I was captured for life by chemistry and by crystals.”
— Dorothy Crowfoot Hodgkin
Quoted in Dorothy Hodgkin: A Life.

This quote can be found in the biography by Georgina Ferry. The first chapter begins in 1920, and immediately introduces Dorothy Mary Crowfoot as a girl, aged 10, beginning her scientific career in a small private class in the Rectory at Beccles, in Suffolk, with a progressive educator who had been trained to go beyond teaching conventional nature study to elementary students and include courses in physics and chemistry.

This is where Dorothy made solutions of alum and copper sulphate and observed that after days of evaporation, gradually crystals appeared. As Ferry describes them, “faceted like jewels, twinkling in the light.” To this, Ferry adds that “Dorothy was enchanted,” and that “Dorothy herself identified that experience as the spark that lit the fuse of her lifelong passion for crystals.” In the words that Dorothy later wrote,

“I was captured for life by chemistry and by crystals.”

By age eleven, she had her own private laboratory in one of the attics of her home. A cupboard held a collection of rocks, bird’s eggs and fir cones. But also, together with a rack of test tubes, she had bottles of crystals, powders and solutions for her experiments. Ferry describes how Dorothy turned “the piece of platinum wire in the flame of the little spirit lamp, while a coloured bead gradually formed at its tip.”

Thus we learn that Dorothy Hodgkin (her name after marriage) began her fascination with science in the way that so many notable researchers have—in their youth—not merely in school, but also by pursuing that interest with self-directed enquiry at home.


Text by Webmaster, with quotes from Georgina Ferry, Dorothy Hodgkin: A Life (1998, 2000), 7-8. Sadly, Ferry does not footnote the subject quote with a citation for its written source. (source)