Excerpt from Stuart's Descriptive History Of The Steam Engine 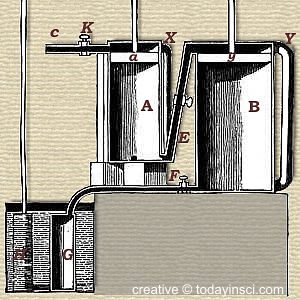 [p.141] The Engine invented by Mr. John Hornblower presents no novelty in its principle or even in the [p.142] arrangement, combining Mr. Watt's expansion Engine with the two cylinders of Dr. Falck. The steam, after it was admitted to elevate or depress the piston in the first cylinder, was then admitted to perform the same action in the second cylinder, which in dimension considerably exceeded the first cylinder, and thus was allowed to operate by its expansion to raise the piston. Our Thirtieth Figure will give a general idea of this contrivance, without showing any of the smaller parts, which, as being similar to those of common engines, and not to confuse the Figure, are omitted. A, the small cylinder, having a piston, a, attached by a rod to the lever-beam, this cylinder communicates with the boiler by the pipe c Other pipes and cocks, X, Y, (Hornblower arranged his parts more compactly, but, in order to explain this machine in one Figure, we arrange them somewhat differently,) are attached to each cylinder, and open a communication with both sides of their pistons. E, is a pipe with a stop cock, which opens a communication between the bottom of the small cylinder A, and the top of the large cylinder B. F, is a pipe and cock leading to the condenser G, its pump H, placed as usual in cold water; these are the same as those in Mr. Watt's Engines. Steam comes from the boiler by the pipe c, and its flow may be prevented by the cock K. We will now suppose the cock K, to allow the passage of steam from the boiler, and the cocks E, X, Y, to be all open, which will allow the steam to fill both cylinders. The cocks X and Y must now be closed, E and K remaining open.

[p.143] By turning cock F, a communication is opened between the under side of the piston Y, and the condenser, which forms a vacuum in B. The steam pressing on the upper side of a, in A, and the communication between the cylinder A under its piston a being open, the steam in A, from its expansive power, will press Y, downwards in B. This decreases the resistance on the under side of the piston a, which is also carried downwards by the pressure of the steam flowing through K from the boiler; and the two pistons descend at the same time, carrying the beam along with them. When they reach the bottom of the cylinders, the cock F, shuts off the communication with the condenser, and the cock E, with the top and bottom of the two cylinders; the cocks in Y, and X, are now opened, which allows the steam in each a free communication between the upper and under sides of their pistons, or between that of the last cylinder and condenser; and the counterpoise at the other end of the lever-beam raises the pistons to the top of their respective cylinders; or the pipe AY, may form a communication between the top and bottom of piston y, and the condenser. X and Y are now shut, and E, F, and K, are opened, and the operation is repeated.—The mode of admitting the steam to allow of the action of the counterpoise, the shutting out the atmosphere, the condenser, and the air-pumps connected with it, are taken from Mr. Watt's Engines. It is unnecessary to enter further into the detail of this engine, which was not found in practice to be at all equal to the common form of the condensing Engine. In fact, the apparatus described [p.144] by Hornblower is in every part the same as Mr. Watt's.* And it must always be subject of regret that this ingenious man should have wasted the best part of his life, and ruined his fortune, in a series of selfish attempts to copy Mr. Watt's inventions without coming within the letter of the patent.

[p.144 footnote]* Hornblower erected several Engines on this scheme, with various contrivances to evade Mr. Watt's patent for the condenser and air-pump; but in practice they were not found equal to the original. And the proprietors of those engines, rather than run the chance of a decision by a Jury, submitted to pay to Bolton and Watt the sum these gentlemen commonly charged for the privilege of using their Engines. Mr. Hornblower's preposterous application to Parliament in 1792, to extend the term of his patent, it need hardly be added, was refused; and none have been erected since the patent has expired. The valves, however, introduced by him were very ingenious and effective, and his mode of trussing the working-beam was highly creditable to his mechanical attainments.