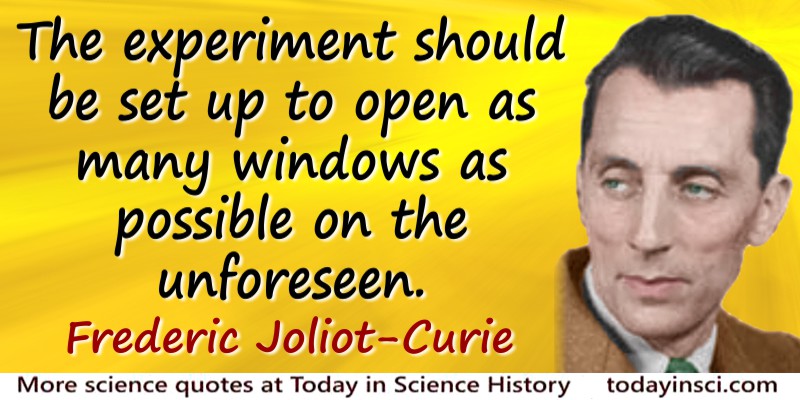 “I have always attached great importance to the manner in which an experiment is set up and conducted … the experiment should be set up to open as many windows as possible on the unforeseen. ”
— Frederic Joliot-Curie
Quoted in Dictionary of Scientific Biography.

The article on Frederic Joliot-Curie in the Dictionary of Scientific Biography was written by Francis Perrin, (17 Aug 1901-4 Jul 1992), who was a physicist (like his Nobel prize-winning father Jean Baptiste Perrin) and had worked with Joliot-Curie and thus knew him well. When the French atomic energy commission was established in 1946, Francis was made one of its directors. In 1951, Frédéric Joliot-Curie was dismissed as its High Commissioner of Atomic Energy, and replaced by Perrin. (With his wife, Irène, Frédéric had helped with its organization, and had been appointed chairman in 1946 by General de Gaulle. Frédéric had joined the Communist party in 1942, working closely with them on resistance activities during the war. Because of his continued association, for polital reasons, he was dismissed from serving as the high commissioner in Apr 1950.)

In his biographical article, Perrin described Joliot-Curie’s study of ionizing radiations emitted by radioactive substances, and the construction of the apparatus he used:

“Joliot used all this equipment with a fertile imagination and a keen sense of those experiments which might lead to the observation of unexpected phenomena.”

In particular, Perrin explained how discoveries were made because Joliot-Curie made the window of his experiment’s ionization chamber out of an aluminium foil a hundred times thinner than a more convenience thickness, which would have absorbed the radiation. Thus less energetic particles were instead made observable. Perrin quotes the words of Joliot-Curie written in 1954, analyzing the conditions of his success:

“I have always attached great importance to the manner in which an experiment is set up and conducted. It is, of course, necessary to start from a preconceived idea; but whenever it is possible, the experiment should be set up to open as many windows as possible on the unforeseen.”