The Cryogenic Laboratory at Leyden 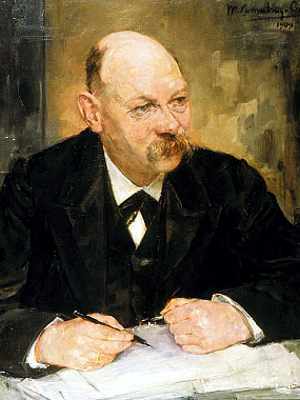 Heike Kamerklingh Onnes. Portrait by his brother Menso (1909). One of four Nobel Prize Winners on the walls of the Reception Room at the University of Leiden Academic Historical Building. (source)

[p.93] The most remarkable plant for the continuous production of low temperatures is that of the laboratory directed by M. Kamerlingh Onnes, professor at the University of Leyden

This installation has required on the part of this learned physicist more than twenty-five years’ of persevering efforts such as only those who have in some sort personally conducted research work can comprehend.

In consequence of these efforts it is now possible to study at temperatures down to –270 deg. Cent. the most diverse phenomena, electric or magnetic. Interest in such researches was thus predicted by M. d’Arsonval in the discourse pronounced by him October 12th, 1908, in closing the first International Congress of Refrigeration at Paris: “The intimate constitution of matter and the nature of electricity may be revealed to us by studying them in the neighborhood of absolute zero, –273 deg. Cent. The discoveries led up to by the labors of Curie, J. J. Thomson and Rutherford show us to-day the atom as a solar system in miniature. It is constituted by the fantastic rotation of electric corpuscles, holding stored within them, in spite of their minute size, live forces many million times superior in energy to the most violent chemical reactions. …”

Thus, in the atom of hydrogen, i.e., in a thing a thousand times less heavy than the billionth of a billionth of a milligramme, there are a thousand or so of these corpuscles called electrons, charged with negative electricity and gravitating around a nucleus charged with positive electricity. These electrons are separated from each other by distances comparable, considering their size, to those of the planets in the solar system; they revolve about each other and about the nucleus with an extreme rapidity, many millions of billions of revolutions per second; of this extraordinary activity is born the formidable energy inclosed within the invisible particle of dust we call an atom. Lodge tries to give an idea of this by saying that in a gramme of hydrogen there is enough energy to lift the entire British fleet to the top of the highest peak in Scotland.

We can, by setting in action powerful magnetic fields, change the orbits of the electrons, and thus affect these marvelous corpuscles, and by modifying the solar system of the atom, obtain affirmation of the preceding conclusions.

The labors of M. Kamerlingh Onnes on the conductivity of metals at very low temperatures suggest the means of obtaining powerful magnetic fields by passing electric currents of great intensity into small coils at a sufficiently low temperature.

Thus the study of matter at temperatures in the vicinity of –270 deg. Cent. may elucidate the mystery of its ultimate constitution. This is a supremely fascinating question discussed with passionate zest in all scientific circles.

The Production of Low Temperatures at Leyden.—The laboratory at Leyden is devoted to the pursuit of pure science. The aim is to establish and maintain any temperature below zero Cent., to keep at this constant temperature as long as may be desired apparatus of any ordinary dimension.

It is not possible to obtain at one blow very low temperatures; it is necessary to proceed by stages, producing successive falls in temperature; each fall is due to the employ of a suitable gas, which liquefies, then evaporates, and liquefies anew in passing through an appropriate cycle. The ensemble of cycles of the circulation of the gases constitutes what is called a cascade in the cryogenic laboratory. 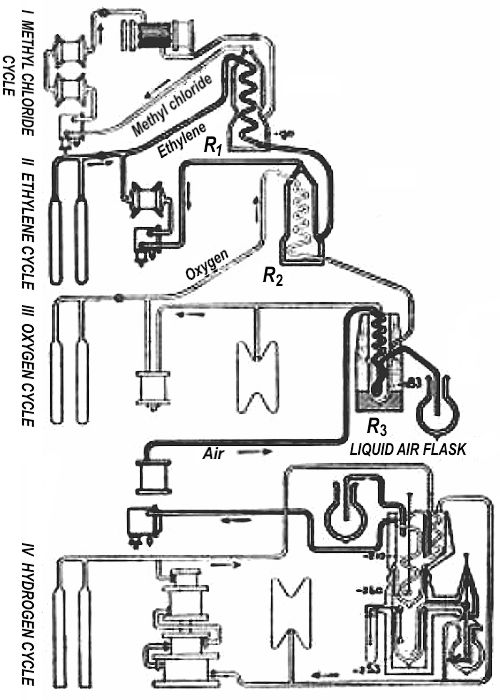 To realize these different cycles M. Kamerlingh Onnes was obliged to become in turn a coppersmith, a mechanician, a fitter, a plumber, and to create all the parts of the machines and utensils of which he had need.

The Leyden cascade comprises five cycles which permit by suitable variations of pressure the production of any temperature between 0 deg. Cent. and –272 deg. Cent.

The cycle of methyl chloride leads to –90 degrees; that of ethylene to –160 degrees; we arrive at –270 degrees, thanks to the cycle of oxygen, at –259 degrees with hydrogen, and finally the cycle of helium permits the descent to —272 degrees.

Fig. 2 gives a general view of the plants and Fig. 1 shows diagrammatically the arrangement of the five cycles. The liquid methyl chloride is led into a receptacle R₁; here it is made to boil under reduced pressure, giving a temperature of –90 deg. Cent.; the cooled vapors are taken up again by a pump, liquefied anew, and returned to the receptacle R₁. The same methyl chloride circulates indefinitely in the cycle, passing alternately from liquid to gaseous estate.

In the second cycle the vapors of ethylene, compressed, then cooled by the vapor of methyl chloride in a heat exchanger, liquefy in the receptacle R₂. In the third cycle oxygen is liquefied by the aid of ethylene evaporating in vacuo. All the cycles working with pure gases are closed with the greatest care. The cooling flask R₃, with liquid oxygen, is used in preparing liquid air.

Hydrogen circulates in the fourth cycle. Cooled by liquid air to about –210 deg. Cent., it is liquefied by allowing it to expand.

The apparatus contains a number of fine stopcocks and narrow capillary tubes through which the hydrogen has to pass. If only a few cubic centimeters of air should become admixed to several hundreds of liters of hydrogen circulating in the apparatus, such air, solidified by the intense cold, will suffice to choke the tubes and cocks. Hence continuous action is possible only with extremely pure hydrogen.

Finally in a fifth cycle helium liquefies and vaporizes. It may be mentioned that 200 liters of helium alternately, can be compressed at 100 atmospheres, and retain an almost absolute purity. This purity is necessary even more than in the case of hydrogen because of the extreme fineness of the capillary tubes. The helium employed contains less than 1/10,000 of foreign gas (purity “controlled” by the spectroscope). 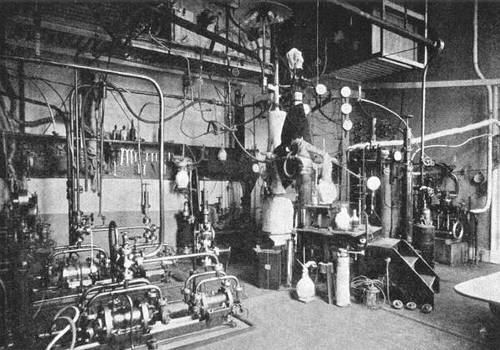 Fig. 2 represents a part of the cascade of the cryogenic laboratory. The numerous accessories seen in the figure are all necessary to meet the manifold exigencies of the measures of precision. 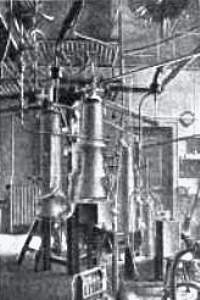 Fig. 3 shows the refrigerants of the cycles of methyl chloride, ethylene and oxygen.

Putting the Different Cycles in Operation.—Nothing demands more methodic treatment than the setting in operation of the different cycles. When all the material is ready, M. Kamerlingh Onnes, standing near the principal apparatus, like the commander of a ship, gives his orders to the observers or mechanicians placed at the head of the different cycles. This is because the various apparatus must begin to act one after the other in a precisely determined order. Little by little each one “comes to life.” … Finally the helium cycle begins to act in its turn; the experiments may be begun. The following schedule will give an idea of the time involved: 9:15, the first cycle is started; 10:00, the condensation of the ethylene in the second cycle is begun; 10:37, liquid ethylene has accumulated in the ebullition flask; 11:50, the maximum quantity of liquid ethylene is obtained, the tension of the vapor is 150 millimeters; the temperature becomes lower; 12:09, the tension of the boiling ethylene is 70 millimeters; 12:15, compressed oxygen is introduced into the spiral of the third cycle; 12:44, a liquid jet is obtained in the oxygen container; 1:32, the bath of liquid oxygen is obtained at atmospheric pressure; 2:10, the bath is in normal condition for working; 4:45, the process is completed.

With his extended experience, M. Kamerlingh Onnes now considers it relatively easy to obtain 60 deg. Cent. of liquid helium in a few hours. This helium, evaporated under the pressure of 0.04 millimeter of mercury, has given the temperature of –272 deg. Cent. This is the lowest temperature ever obtained up to the present time.

Some Studies Made in the Cryogenic Laboratory.— Scientists of every land may study the most diverse phenomena at Leyden, where they are received with the greatest hospitality. The following are some of the studies carried out there:

a. The electric conductivity of metals at low temperatures.

b. The temporary suspension of life in certain seeds.

M.P. Becquerel has investigated whether at very low temperatures the life of grains may be suspended for any definite period of time, and resumed later at the will of the experimenter.

His experiments have been carried out with seeds of mustard, lucerne and wheat. The integument of the grain was perforated in such manner as to make it more permeable. These grains, dried in a vacuum for six months, then placed at Leyden in liquid air for three months, were finally kept for 77 hours at –253 deg. Cent. (by the aid of a bath of liquid hydrogen).

On their return to Paris, the grain placed on absorbent cotton at 28 deg. Cent. germinated at the end of a few days. The difference could be observed between this germination and that under ordinary conditions.

Thus the law of the continuity of vital phenomena so [p.94] often invoked by physiologists seems at fault. According to this life is a succession of uninterrupted phenomena which can in no case be arrested without fatal result, and which has been transmitted from generation to generation since its first appearance on the earth, without the slightest discontinuity.

M. Becquerel’s experiments do not agree with this supposition. As M. Armand Gautier has frequently said, seeds, or even lower animals, may often be considered as machines, dead for the time being, but ready to function—watches put together accurately and needing only to be wound up to start running. These machines, these “timepieces,” will not move until the proper conditions produce the required “winding.”

Translated for the Scientific American Supplement from La Nature.