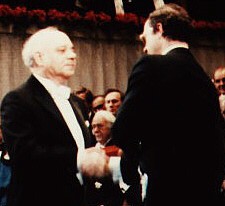 Since 1946 Jerome Karle's career has been with the Naval Research Laboratory in Washington, D.C., after a brief stint in Chicago with the early 1940's Manhattan Project to develop the atomic bomb. By 1968 he was the NRL's chief scientist for the Laboratory for the Structure of Matter.

To further his work to study the fine structure of crystalline materials he wanted to improve on the time-consuming "heavy atom" method whereby first, an atom of high atomic mass was substituted in the crystal lattice of the sample to be examined. The differences in the diffraction patterns of the original and modified samples are then compared to deduce the structure of the crystal.

His search for an easier way to make these measurements led to developing the "direct method" of X-ray diffraction with Herbert A. Hauptman. Using this new diffraction technique, information could be interpreted in a simple manner directly from the image pattern produced.

X-rays are used because they have very small wavelength, less than the separation of the atoms in a crystal.The crystal contains a unit of atoms, which is repeated throughout the whole crystal in all directions. When a beam of X-rays is aimed at crystal, it deflects the x-rays in certain definite directions so that the radiation can be seen as spots of different intensity such as in a photographic film. To determine the structure the “phase” of each ray that is deflected must also be known. This determination can be carried out by using the “direct method.”

This ability to produce measurements of a molecule's structure has tremendous value both in the function of molecules in biological contexts and in organic synthesis for the study of the mechanism and chemical dynamics of reactions. Thus there was now a way to determine 3D crystal structures of hormone, vitamin and antibiotic molecules.

The direct method has application to the determination of atomic arrangements in various states of aggregation, gases, liquids, amorphous solids, fibers, and macromolecules.

For this important work, he and Hauptman were awarded the 1985 Nobel Prize in Chemistry.

In other research, he has used the power of high speed computers to produce real-time images of crystals and complex biomolecules.