Personalities of To-Day: No. 8 of a series of 25 Caricatures 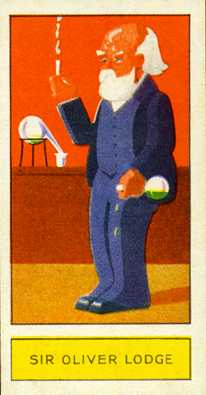 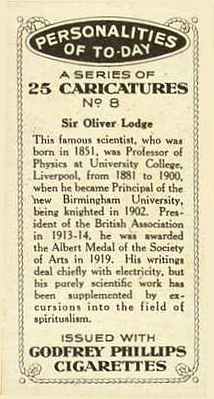 Text on the back of the card: “This famous scientist, who was born in 1851, was Professor of Physics at University College, Liverpool, from 1881 to 1900, when he became Principal of the new Birmingham University, being knighted in 1902. President of the British Association in 1913-14, he was awarded the Albert Medal of the Society of Arts in 1919. His writings deal chiefly with electricity, but his purely scientific work has been supplemented by excursions into the field of spiritualism.”


Card, 1-3/8 x 2-5/8 inches, issued (1932) in England by Godfrey Phillips Ltd, as an insert in their cigarette carton. Images courtesy of moviecard.com (source)