History of the Life-boat, and Its Work

[p.3] As is frequently the case with great inventions, it is somewhat difficult to say who was the first designer of the Life-boat; for although Mr. Henry Greathead, a shrewd boat-builder at South Shields, has very generally been credited with designing and building the first Life-boat about the year 1789, yet it is certain that Mr. Lionel Lukin, a coach-builder in Long Acre, London, had designed and fitted a boat for Saving Life in cases of Shipwreck, which he called an “Unimmergible Boat,” some four or five years before Greathead brought forward his plan for a Life-boat.

Lukin was a native of an inland town, Dunmow, in Essex, and not a resident in a seaport; he had nevertheless learned “that by the oversetting and sinking of both sailing and rowing boats many valuable lives had been lost,” and was thus induced to turn his attention to the subject in 1784. The then Prince of Wales (George IV.) who knew Lukin personally, not only encouraged him to test his invention experimentally, but offered to pay the whole expense of his experiments.

It appears that Lukin then purchased a Norway yawl, which he fitted up according to his plan, and which he tried in the Thames. To the outside of the upper frame of the yawl he added a projecting gunwale of cork, tapering from nine inches amidships, off to very little at the head and stern, and, in addition to this, he formed within the boat from the gunwale to the floor a [p.4] hollow water-tight enclosure, which gave the buoyancy that was required, the compartment running nearly from stem to stern. By these means “the vessel had such a power of buoyancy in its upper part as to render the specific gravity of the whole vessel and its contents less than the specific gravity of the body of water it would displace in sinking.” In order to give it weight or ballast sufficient to keep it upright, the patentee added a false iron keel, and he increased the buoyancy of the boat by two water-tight enclosures, one at its head, and another at its stern. Upon these principles several Life-boats were constructed, and found “to be strictly unimmergible.” A patent for the design was taken out by Lukin on the 2nd of November, 1785, and the specification appeared in the third volume of the ‘Repertory of Arts.’ The accompanying drawings of Lukin’s Life-boat are fac similes of those given in the book, descriptive of his boat, which was published by him in 1790. 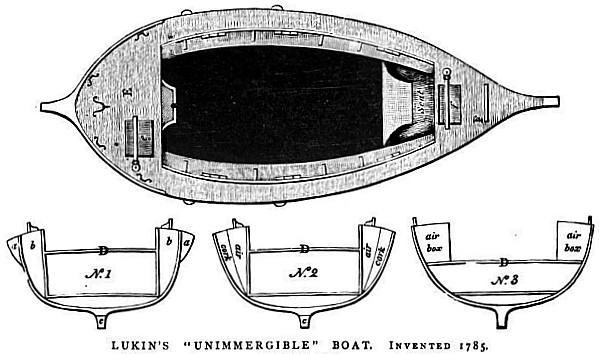 The Rev. Dr. Shairp, of Bamborough, hearing of the invention, and having charge of a charity for saving life and property at sea, sent a coble to Mr. Lukin to be made “unimmergible.” This was done, and satisfactory accounts were afterwards received of the altered boat, which was reported to have saved several lives in the course of the first year of its use.

Although the Prince of Wales had been the liberal patron of Mr. Lukin, yet even his influence was not sufficient to bring the Life-boat into notice; and Mr. Lukin appealed in vain for encouragement to the First Lord of the Admiralty, to the Deputy Master of the Trinity House, and to various Admirals and Captains of the Navy. With the exception of the Bamborough coble, not a single Life-boat on this plan was placed at any of the dangerous parts of our coast.

[p.5] Lukin retired from business in 1824, and ultimately went to reside at Hythe, in Kent, where he died in 1834. At his request, the following inscription was engraved on the reverse side of his tombstone, and is still to be seen in Hythe churchyard:

“This Lionel Lukin
Was the first who built a Life-boat, and was the original Inventor
of that principle of safety, by which many lives and much property
have been preserved from Shipwreck; and he obtained for it the
King’s patent in the year 1785.”

As we have said, notwithstanding Lukin’s ceaseless efforts to bring his plan of Life-boat into general use, hardly any efforts had been effectually made to aid the shipwrecked mariner until the year 1789, when the Adventure, of Newcastle, was wrecked at the mouth of the Tyne. While this vessel lay stranded on the Herd Sand at the entrance of the river, in the midst of tremendous breakers, her crew “dropped off one by one from her rigging,” only three hundred yards from the shore, and in the presence of thousands of spectators, not one of whom could be induced to venture to her assistance in any boat or coble of the ordinary construction. Under the strong feelings excited by this disaster, a Committee was appointed, at a meeting of the inhabitants. of South Shields, to offer premiums for the best models of a Life-boat “calculated to brave the dangers of the sea, particularly of broken water.”

From the many plans which were offered to the Committee, two were selected—one by Mr. William Wouldhave, a painter, and one by Mr. Henry Greathead.

A stained-glass window to the memory of Lionel Lukin, inventor of the first lifeboat in 1784, was unveiled in Hythe Church, Kent.

Sadly, the stained-glass window was destroyed in Aug 1940 when a German bomb fell close to St. Leonard’s Church, Hythe. (source)