DESCRIPTION OF THE METHODS ADOPTED FOR RAISING AND SUSTAINING 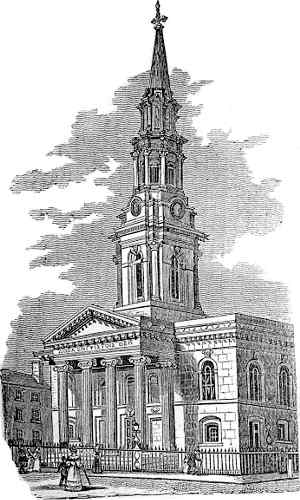 [p.332] St. George’s parish church, one of the finest ecclesiastical edifices in the city of Dublin, was completed in the year 1802, from the designs of the late Francis Johnston, Architect to the Board of Works at that time, at a cost of about 90,000l.

The church had not been built many years, before the roof, which was covered with tun slating and copper, gradually sunk in several places, by which the cornices at the flank wall were pushed several inches outwards. The subsidence slowly but continually increased. The ceiling cracked in various places, the ornamental stucco work began to drop off, and in the year 1836 the state of the roof was such, that the church was deemed unsafe for use, and was shut up.

Messrs. John and Robert Mallet were consulted as to the practicability of restoring the roof. In November, 1836, they reported that they considered the ceiling might be preserved, and described the manner in which they proposed to accomplish it.

The mode proposed consisted in interweaving with and adapting to the timber framing of the roof, a system of metallic framing, so arranged, that all strain or stress should be removed from the former, and borne by the latter, as well as removing all lateral pressure from the walls of the building.

A careful survey of the roof showed that the ends of several of the principals were unsound. A small hole was then bored through the ceiling, close to each queen-post, and a deal rod, ½ an inch square, dropped through each. These rods were all of equal length and their upper ends were secured level with the top surface of the tye-beam of each principal ; then with a levelling instrument placed in the gallery, observations were taken, and the exact amount of the deflection of the framing ascertained. The variation was considerable, but the greatest amount of depression was found to be 5-7/8 inches. The whole roof was strained and distorted, and was so unsafe that the slightest effort caused vibration throughout. The causes of this failure appeared to be threefold: a radical want of strength in the framing of the roof; secondly, the employment of unfit tye-beams, which having been constructed during the Continental war, when timber was scarce and dear, were formed almost wholly of short lengths, averaging not more than 20 feet, lapped and scarfed; thirdly, in the queen-posts having been badly constructed and ill placed.

The stone corbels, which supported the oak cantilevers, being originally cut almost through to receive the wall-plate, were nearly all broken in the middle. It was proposed, therefore, to remove the oak cantilevers and stone corbels, and to cut away the timber wall-plate beneath each principal, to level up the wall, placing a suitable cast-iron abutment piece at each end, and to spring from side to side a cast-iron arch, in “double flitches,” connected through the spaces of the timber framing by hollow distant pieces, and also by a certain number of equidistant crossheads, from which should drop down vertical suspending rods, capable of being adjusted in length, and connected by the tye-beam of the principal, so that being drawn up straight, and the respective parts secured, the weight of the whole roof would be transferred through the framing to the tye-beams; whilst they being hung from the system of suspension rods of the cast-iron arches, which would thus sustain the whole load, and their abutments being held together by the tye-bers in the chord line, the load would bear vertically upon the walls.

It was then determined to raise the roof and ceiling by forces applied from below; to cut away the rotten ends of the principals and to reconnect them with the walls by a modification of the cantilever bracket, invented by Mr. Alfred Ainger, and described in the Transactions of the Society of Arts (vol. 42). The whole of the oak cantilevers and I tons corbvls were to be removed as useless incumbrances.

The total weight of the roof being about 133 tons, each framed principal would sustain about 16½ tons, and each vertical suspending rod about l½ ton.

Although the weight of material in this roof and ceiling may be considered uniformly distributed, [p.333] it was impossible to foresee what change might be effected in the framing by forcing the ceiling and roof up to a level line, or what amount of force might bear upon particular points, from the elasticity of the materials being thus forcibly constrained. It hence became a matter of prudence to provide in all parts a large surplus of strength, bearing in mind that, in any complete system, “the strength of the whole is limited by that of the weakest part, and thus that partial strength becomes total weakness.” The dimensions of the scantling were accordingly so calculated that the utmost strain upon it should not exceed 4.5 tons per square inch, considering 9 tons to be the practical limit to which wrought iron might be exposed.

After giving the formulæ for calculating the strains upon the different parts of the roof, with the reasons why the theoretical dimensions were in some instances departed from, the author apologises for entering so much into detail of the construction, quoting at the same time the writings of Smeaton and Telford, as abounding in the richest details of theoretic deduction, modified by practical judgment. He then proceeds to describe the means adopted.

Immediately beneath each of the fourteen queen-posts of the roof, an aperture of 30 inches square was cut through the floor of the church, and a pier of brick and cement built up from the arches of the vaults beneath to the level of the floor; on the top of each, a plate of cast iron was bedded, and upon each plate a block of oak timber about 4 inches thick. 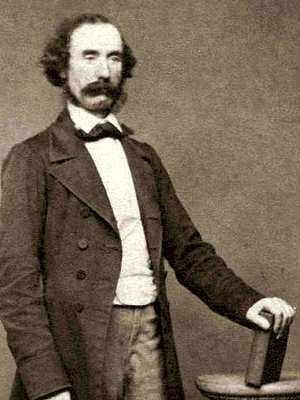 Fourteen straight whole balks of Memel timber, each 3 feet shorter than the height of the church between the floor and the ceiling, with their extremities cut square and smooth, were placed vertically upon the blocks; upon this level a platform was laid; across the tops of the vertical balks, pieces of oak scantling were placed; fourteen powerful screw-jacks were then fixed, one beneath each queen-post, and the ceiling cut away for the points to bear directly upon the beams.

During the progress of these operations, the whole of the ceiling and roof framing had been carefully examined. The dust was removed from the joints and open mortices, &c., of the framing, and the cracks in the ceiling were cleared out by passing a fine whip saw through them, so as to permit their closing when the ceiling was raised to a plane surface.

The preparations being completed, the word was given to heave simultaneously upon the screw-jacks; the roof rose slowly and steadily, and as soon as any one of the small deal standard rods had reached the level plane, the motion of the screw-jack at that spot was stopped. In about two hours, the whole roof, together with the ceiling, was brought up level, without any accident or injury to any portion of the ceiling. The cracks in the latter as well as the joints and mortices of the framing were found to be nearly all closed. Some slates were broken, and the copper of the platform, which before was wrinkled and loose, was now found to be drawn tight over the timber sheathing.

The roof being thus supported from beneath, the masonry was cut out round the ends of the principals; the oak cantilevers, and corbels of granite, and the rotten ends of the timbers, within a few inches of the inside face of the walls, were also removed.

The cantilever and abutment castings were now applied, and bedded with lead and oil putty, on blocks of stone set at the level of the under side of the tye-beams, on footings of brick and cement. The chord-bars were next placed, and temporarily adjusted by means of their screw nuts. The arch segments were put up in succession, their centre or key pieces bolted in, and the segments adjusted to them by means of wedges of African oak; the suspending rods were then hung on from the top shackles, and the junction made good with the tye-beams, by means of the lower cross-heads, stirrups, and shackles.

As soon as the whole system of the seven-arched frames was complete, and the cantilevers adjusted to the ends of the decayed timbers, standing lengths of pine rods were placed in right lines from centre to centre of each pair of abutment cross-bolts, and all the chord-bars and suspending-rods were brought up by means of their adjustment screws, until the united effort of the whole system had lifted and supported the entire roof and ceiling from the screw-jacks, on which they had previously rested, so that these latter all became loose.

The whole was now left quiet for some days, in order that every part might take its bearing, and that the sufficiency of the structure should be proved before the removal of the screw-jacks, &c., which remained within about 1/8th of an inch of the blocks beneath the tye-beams, by which means, in case of accident, the amount of fall would have been limited to that small distance. The entire work, including the repairing the cracks in the ceiling, occupied little more than four months, and has never since required either alteration or repair.