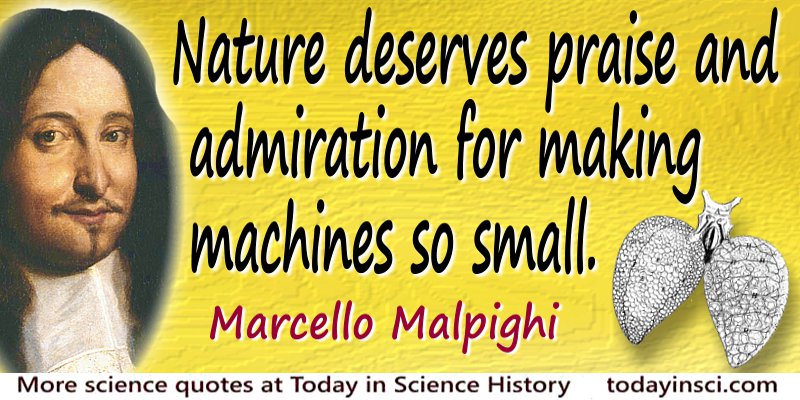 “Just as Nature deserves praise and admiration for making machines so small, so too the physician who observes them to the best of his ability is worthy of praise, not blame…”
— Marcello Malpighi
'Reply to Doctor Sbaraglia' in Opera Posthuma (1697).

Marcello Malpighi, a professor at Bologna, followed William Harvey as a fervent supporter of his theory of the circulation of blood. Extending Harvey’s work, Malpighi discovered the capillary circulation between the arteries and the veins, and by further microscopic investigation viewed the blood corpuscles in actual motion through the capillaries in the lungs of a frog.

The microscope had been invented earlier in the century, but Malpighi was among the first to make as extensive use of it. By 1671, he was scrutinizing the development of the chick within the egg, and thereby fathered the science of embryology, documenting his work with meticulous diagrams. Yet his efforts drew sneers from traditionalists in the medical community.

In 1689, Paolo Mini, even though a former student of Malpighi, attacked research with the microscope:1

“It is our firm opinion that the anatomy of the exceedingly small, internal conformation of the viscera, which has been extolled in these very times is of use to no physician.”

Girolamo Sbaraglia, in the same year, also published a substantial attack against Malpighi’s efforts, decrying the pursuit of microanatomy as having making no useful contribution to practical therapy. Was there no need for it to be taught in medical schools? Malpighi, in the remaining five years of his life, prepared his defense of its value, which, as he planned, was published posthumously with other works, in Opera Posthuma (1697). As part of his reply ('Riposta') to the attack by Sbaraglia, he wrote:

Nature, … in order to carry out the marvelous operations [that occur] in animals and plants has been pleased to construct their organized bodies with a very large number of machines, which are of necessity made up of extremely minute parts so shaped and situated as to form a marvelous organ, the structure and composition of which are usually invisible to the naked eye without the aid of a microscope. … Just as Nature deserves praise and admiration for making machines so small, so too the physician who observes them to the best of his ability is worthy of praise, not blame, for he must also correct and repair these machines as well as he can every time they get out of order.

Of course, we now know that anatomical investigation with the microscope provides a doctor with greater knowledge of an illness from its pathology. In turn, there are implications for treating the disease. Sadly, Malpighi’s opponents prevailed, and the use of the microscope in medicine had little support for another century and a half.