from The Popular Science Monthly (1880) 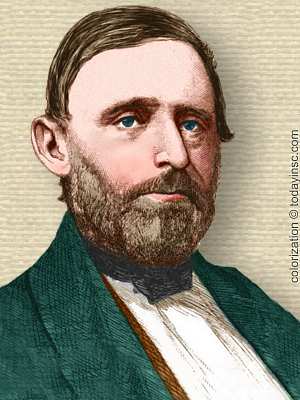 [p.402]On September 28, 1879, the earthly career of a man closed at Bonn, Germany, whose numerous original researches and contributions to pharmacy, chemistry, chemical analysis, geology, and other branches of the physical and applied sciences, have placed him in the foremost ranks of scientific investigators. Karl Friedrich Mohr was born November 4, 1806, at Coblentz, on the Rhine, where his father was an apothecary. After having completed the full course of the gymnasium of his native city, he entered, in 1823, his father’s establishment as an apprentice. In 1828 he went to the University of Heidelberg, where he applied himself to the study of philosophy, the natural sciences, and pharmacy, and where, by the influence and guidance of Leopold Gmelin, his interest was particularly drawn to chemistry; he subsequently studied at the Universities of Berlin and Bonn, and in 1831 graduated as doctor of philosophy. After having passed the state-examination as apothecary, in 1832, he returned to Coblentz, and became the assistant, and, in 1840, the successor of his father, in business.

Mohr’s first literary production was an essay on the nature of caloric and the conservation of force, published in “Baumgaertner’s Journal,” in 1837, in which the principle of the unity of natural forces and the law of equilibrium, now generally adopted, were for the first time exactly and fully defined, and, five years afterward, were established on a firm mathematical basis by Robert Mayer, of Heilbronn, and, still later and more fully, by the experimental researches of Joule, in England.*

His application to practical pharmacy led Mohr to again enter the field of pharmaceutical and chemical research; he undertook the completion of the comprehensive work “Pharmacopœia Universalis,” projected by Professor P. L. Geiger, who died in 1836, shortly after the publication of the first part of that work, embracing the crude drugs and simple chemicals. The second part, by Mohr, was published in 1845, and contained the formulary of pharmaceutical and chemical preparations of the various European pharmacopœias in use during the preceding seventy-five to eighty years, and including, of American works, the United States Pharmacopœias of 1820 and 1830, Coxe’s “American Dispensatory,” and Ellis’s “Formulary.” His application to the details of practical pharmacy and of chemical operations, his wonderful skill and inventive mind, resulted in the improvement and completion of old, and in the construction of a large number of novel [p.403] apparatus, appliances, and processes in pharmacy and chemical analysis, which he embodied in his “Lehrbuch der pharmaceutischen Technik” (“Manual of Pharmaceutical Practice”), published in 1846. This remarkable work has since been reprinted in five editions, and has been twice translated into French, and into English by Professor Redwood, of London, and edited for American use, in 1848, by the late Professor William Procter, Jr., of Philadelphia.

In 1847 Mohr completed a commentary on the Prussian Pharmacopoeia in two volumes, a work replete with original research and thought, and characterized by frank critical analysis of both the excellences and the defects of the Prussian standard. This work has also been republished in five editions. A smaller volume on the art of dispensing (Receptir Kunst), mainly intended for the instruction and use of physicians, published in 1854, completes the list of Mohr’s separate pharmaceutical works, while his numerous contributions to the pharmaceutical journals of Germany, continued almost during his lifetime, were of great importance, covering the domain of practical pharmacy, and embracing many processes as well as manipulations and apparatus, invented or perfected by him and now widely adopted and in general use everywhere.

The principles and great practical value of the volumetric method of estimation in chemical analysis, recently introduced by Gay-Lussac, Marguerite, and others, attracted at once Mohr’s quick and inquisitive mind; recognizing both the simplicity and accuracy of this method, he promptly applied his study and talents to its improvement, and soon brought volumetric analysis to such a perfection and comparatively ready execution that his “Manual of Volumetric Analysis” (“Lehrbuch der chemisch-analytischen Titrirmethode”), published in 1855, met with general and unqualified acceptance; since then four revised and enlarged editions have been published, and it has been translated into most civilized languages, and up to the present time is regarded as the standard work in this branch of chemical analysis, which has been of great value and use in the development and advance of chemical industry. 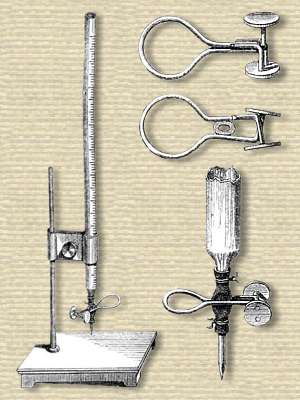 During these active years of Mohr’s life it was, however, not only the practical and analytical application of pharmacy and chemistry that received his attention and the fruits of his labors and accomplishments, but likewise the theory of science and popular instruction; already in 1864 Mohr had established himself as “Privat-Docent” in pharmacy, chemistry, and geology at the University of Bonn, where he was appointed as Professor of Pharmacy and Chemistry in 1867, and where he published in 1868, aside from many scientific as well as popular contributions to journals, his most important work on theoretical chemistry, “The Mechanical Theory of Chemical Affinity,” being a continuation and perfection of his first similar essay published in 1837.

[p.404] At the meeting of the German scientists and naturalists in Bonn, in 1857, Mohr’s interest was so much drawn toward the problems of geology that he henceforth devoted much study and research to geological investigations. Besides a series of excellent popular essays in “Westermann’s Monatsheften,” in 1866 appeared from his fruitful and highly appreciated pen “A History of the Earth,” in which he advanced and sustained novel views on the origin of anthracite coal, the deposits of lime in the seas through the agency of plants, the occurrence of magnetic iron in basalt, and of metallic iron in meteorites, etc.

Mohr’s works and writings, extending over a wide sphere of the physical and applied sciences, are characterized by strict scrutiny, clearness, and attractiveness; his attainments, learning, and eloquence were widely appreciated; during many years he delivered popular lectures on various branches, or special topics, or problems of chemistry or geology, at Coblentz, Bonn, Cologne, and other cities, and these lectures drew large audiences of the most cultured classes of society; the present accomplished Empress of Germany was, during her many years’ residence in Coblentz, among his devoted hearers. His popular essays in “Westermann’s Monatsheften” in “Gaea,” in the “Cologne Gazette” and other German journals, were ever-welcome literary contributions of the highest order, and also entered largely into the literature of other nations. Distinctions and honors, never courted by his independent and stern character, were not wanting for him, both at home and abroad. Among American societies, the American Pharmaceutical Association and the Philadelphia College of Pharmacy had elected him an honorary member in 1868.

One year before his death, Mohr delivered, on the occasion of the annual meeting of the “German Apotheker Verein” in Coblentz, in September, 1878, his last address to the representatives of his original vocation an oration—which obtained a wide and just fame for its masterly exposition of the past, the present, and the future mutual relations of chemistry, pharmacy, and medicine, and of the accomplishments of pharmacy for the progress and growth of the other two.

Risen like his famous contemporaries Woehler, Heinrich Rose, Wiggers, Liebig, and others, from the ranks of pharmacy, and carried far off from her special sphere by his application and labors during an active career, Mohr again and again betook himself to his alma mater, and, perhaps more than any one of his collaborators contributed to maintain the high place and reputation of German pharmacy in the domain of physical research; and, among the many eminent scholars and investigators of his time whose names adorn the records of advance in sciences and arts, Friedrich Mohr’s name will be an imperishable one in the history of pharmacy and of her offspring chemistry.