Jacques Monod - “There is no intention in the universe” 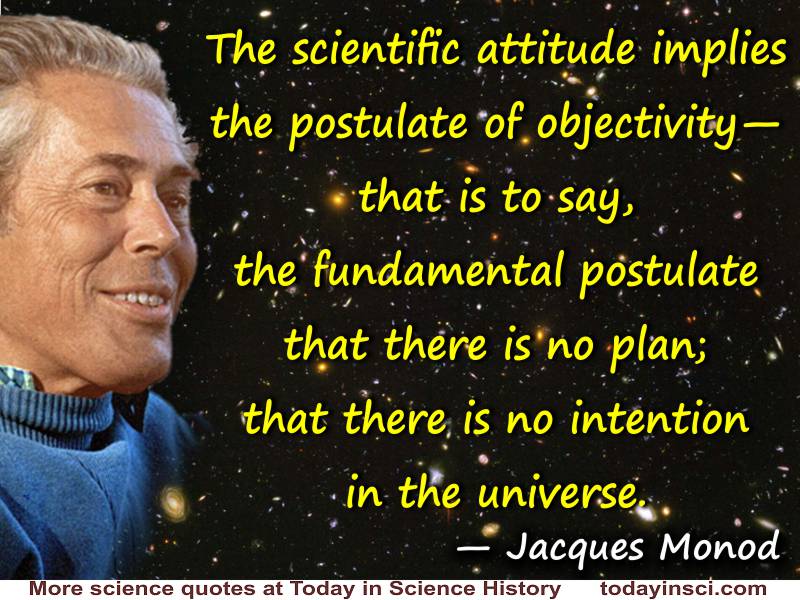 Context of Jacques Monod’s quote, “There is no intention in the universe”

Jacques Monod, having been awarded the 1965 Nobel Prize in Medicine and Physiology, gained more recognition with the smash hit of his book, Le Hazard et La Nécessité (translated as Chance and Necessity). It caught the public's imagination. Reporting in the New York Times (15 Mar 1971), John C. Hess described Monod’s belief “that all forms of life are the product of pure chance—through unpredictable mutation—and of necessity, or Darwinian selection,” which made it impossible “to accept any system, religious or materialist, that assumes a master plan of creation.”

The article quoted Monot's own words from the interview:

Now this is basically incompatible with virtually all the religious or metaphysical systems whatever, all of which try to show that there is some sort of harmony between man and the universe and that man is a product—predictable if not indispensable—of the evolution of the universe.

“Of course, naive faiths, fundamentalist beliefs in the Bible do just that. They put man in the center of the universe and believe that for some reason there is a necessity everywhere under God’s command.

In more elaborate modern versions of Christianity you find speculations like those of Teilhard de Chardin, which give an evolutionist interpretation of the universe in which man is a sort of achievement which had been predicted from the beginning. It is again an interpretation which denies the principle of objectivity.”

The article reported that to date, some 155,000 copies of Monod’s book were already in print, with further translations on the way. Monod was to become the head of the Pasteur Institute the following month.