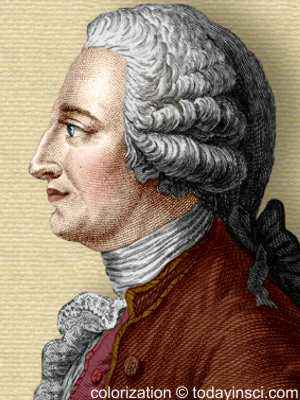 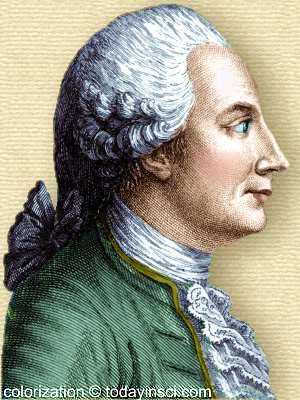 Joseph-Michel Montgolfier, born on 26 Aug 1740, and his younger brother  Jacques Étienne Montgolfier, born five years later on 6 Jan 1745, were from a family of sixteen children. Their father was a paper manufacturer, owner of a factory at Viladon-les-Annonay, south of Lyon, France.

Throughout history, humankind has looked up at the clouds and dreamed of what it would be like to be among them, instead looking down with a bird’s eye view of the trees and buildings. Like those before him, Joseph observed the sky, too, yet had a different inspiration. The idea came to him to get some paper from the factory and make a large bag, which he filled with steam. But all that resulted was a sodden mass of paper.

Étienne’s imagination was also stirred. From scientific reading, he had the idea of making a bag float in the air with hydrogen gas obtained from sulphuric acid and iron filings. Still no success.

Experimenting indoors, in Nov 1782, Joseph achieved a small-scale success using a taffeta envelope filled with hot air which he watched rise to the ceiling. Now the dream of the Montgolfier brothers seemed in reach. With more taffeta, rope, and high hopes, they prepared a large-scale experimental balloon.

Joseph and Étienne Montgolfier, saw their hopes becoming reality with the first public demonstration on 4 June 1783. Their first step was taken when their hot-air balloon took off from Annonay, France. The 800 cubic metre balloon rose to a height of 1,000 meters, and traversed a distance of two kilometers. It was made of cloth, lined with paper, coated with alum as fireproofing, and its several segments held together by about 2,000 buttons.

The balloon flight was a success even though the physics was not well understood by the brothers. They believed that smoke provided the lift for the light fabric balloon. Thus, the balloon was filled by smoke from a fire of straw, humidified wool and even of old shoes! The more dense the smoke, the better, they thought. Only later was it realized that it was the hot air provided by the fire that mattered, not the smoke.

For a second test, a new balloon of 1,400 cubic metre was built. The demonstration took place in Paris in the presence of King Louis XVI on 19 Sep 1783. Three passengers—a cock, a duck and a sheep—were used as guinea-pigs in order to test the effect of high altitude on live creatures. The king was not impressed by the stench of the dense smoke, however, this flight, too, proved to be a great success. The balloon rose to a height of 500 metres and traversed three kilometers.

On 21 Nov 1783, the Montgolfier brothers made another test. They used a new balloon which measured 2,200 cubic metres, and was propelled by an iron furnace. This time two men, Jean-François Pilâtre de Rozier (a physicist) and François Laurent, Marquis d’Arlandes, were the first human pilots on an untethered flight. Their flight lasted 25 minutes, reached a height of 900 meters, and landed 10 kilometers away. One of the old dreams of humankind then had been realized, taken from testing a concept to a real flight in the span of one year!