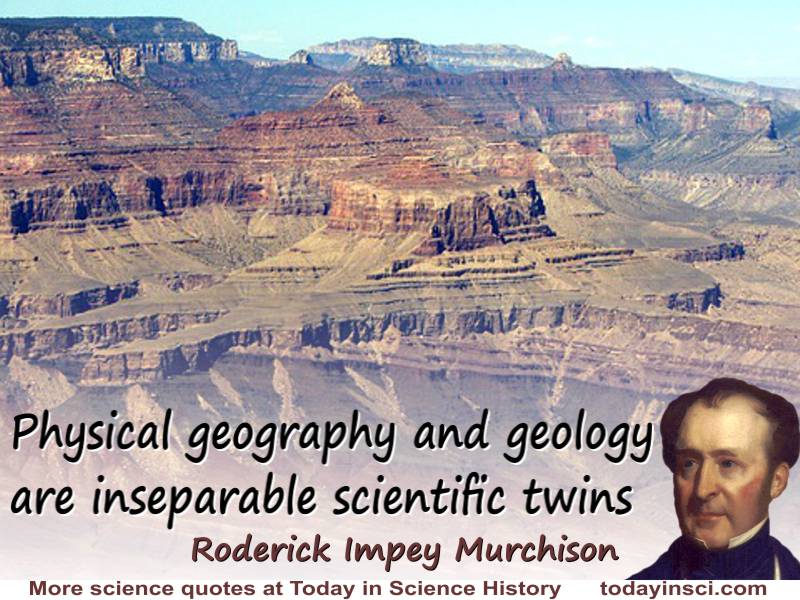 “Physical geography and geology are inseparable scientific twins.”
— Roderick Impey Murchison
Address at the Anniversary Meeting of the Royal Geographical Society (25 May 1857)

Sir Roderick Impey Murchison resumed the position of president at the Anniversary Meeting of the Royal Geographical Society of London, and gave an address there on 25 May 1857. He had vacated the chair in 1854, but his two successors had died, so his address began with obituaries to those and a number of others. Murchison continued with a worldwide sweep of geographical progress, including surveys and soundings. Having directed the Geological Survey of the United Kingdom during the previous two years, he spoke from his direct experience on the progress of of the Geological Survey as

“a branch of the public service so intimately connected with geographical science.”

Among his topics for Physical Geography, in his address Murchison spoke about the various examples of the “Permanent Effects of Winds and Currents.” This section of his talk was concluded with a remark that

“As we know that the ripples on the surface of the sands of the present shores indicate the direction of the waves, so … when observations shall have been made … upon the ripple-marks which have been preserved in the successive surfaces of stone, we shall be enabled to infer the direction in which the prevailing winds blew during each former geological period!

But I am now, perhaps, realizing too demonstratively for all my hearers, the truth of the incontrovertible axiom, that physical geography and geology are inseparable scientific twins.”

Murchison had much more to cover in his talk, but one other point of interest, to place his address on a historical timeline, is that on “Useful Inventions” he began by naming the nautical observations used to determine the path for submerging the “Great Atlantic Electric Telegraph” cable. (It was in fact laid in 1857-58).