A Short Story of Thomas Newcomen

Concerning the personal history of this engineer very little is known, and yet the engine which bears his name was the very first use of steam in a successful steam-engine. It was so successful that it held the field almost without dispute for the half century preceding the epoch-making invention of James Watt. 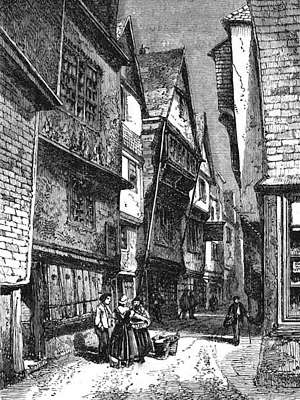 There is no record of his birth1, but the house in which he lived was standing until comparatively recent years, on Lower Street, Dartmouth. It was apparently a house of the better class, and there are numerous indications of his respectable standing and connections. The parish church contains a group of memorials of his near relatives which all bear the mark of comparative wealth, but nothing remains to indicate the days of Thomas.

Smiles2 follows the removal of the family northward, but there the traces disappear completely.

Newcomen was a blacksmith and ironmonger by trade, and as such had a high standing for excellent workmanship. It happened that Captain Savery, the inventor of the vacuum pump, lived at Modbury, which was only fifteen miles distant. He made a great many experiments, and in one place it is recorded that he complained of the difficulty he had in getting machinist labor of sufficient skill to do his work. This gives color to one story of the beginning of Newcomen's interest in the use of steam, which is that Savery had him do more or less of his work. At any rate, the experiments of Captain Savery were common knowledge, and must have been known by such a skilled workman as we know Newcomen to have been, and who lived only fifteen miles distant. We also know that Newcomen had drawings of Savery's pump, and set one up in his garden with which to experiment; but Switzer, who was a friend of Savery, says that although Savery received in 1705 the first patent for the use of steam ...3, Newcomen was fully as early in his experimental work, and failed in securing priority because of Savery's more intimate relations with the Government. The Newcomen patent was granted in 1707 to three associates, Newcomen, Cawley and Savery. There is no doubt that Newcomen was the real inventor. Cawley was a glazier, who was his assistant, and Savery was included, it is generally accepted, because of his strenuous insistence that any use of the condensation of steam was an infringement of his 1705 patent. The true facts are that Newcomen's invention was radically different from that of Savery or any other single person. Papin invented the cylinder and piston as a means for transforming energy into motion. At first he used the explosive force of gunpowder, and later the use of the expansive force of steam, to raise the piston, and then by removing the fire to cause it to fall again. He made no further use of this principle. Savery discovered that the sudden condensation of steam made a vacuum that he utilized to draw up water. His pumps were actually used to drain mines, but were never satisfactory. They had to be placed within the mine to be drained, not over forty feet from the bottom, and then could be used to force up water an additional height of perhaps 100 feet. Beyond this the process must be repeated. It will be noticed that the water to be forced came into direct contact with the steam, which was contained in a solid vessel.

In addition tremendous pressures were necessary: as high as 1,200 pounds per square inch were secured, and with the materials for construction at hand frequent and disastrous explosions were the result.

Thus it is seen that Newcomen, like a good engineer, constructed his machine from the suggestions of his predecessors.

At first he made a double cylinder, using the space between for condensing water. This was not very satisfactory. The vacuum was secured very slowly and imperfectly. In 1711 they attempted to erect an engine for draining a mine, but failed. The next year they succeeded in erecting it, but it was slow and ineffective. To operate it, required two men and a boy. The boy's work was to alternately open and close the valves to the condensing water and to the boiler. One day the engine made two or three motions quickly and powerfully. Newcomen immediately examined the cylinder and found a small hole, through which a small jet from the water that was on top of the piston to make it steam tight, was spurting into the cylinder. He appreciated the significance of the incident at once, dispensed with the outer water jacket and injected the water for condensation, through a small pipe in the bottom of the cylinder. It was a success at once and increased the speed of the engine from eight to fifteen strokes a minute, besides getting the advantage of a good vacuum.

In 1713 a pump was erected in Leeds, and the boy who was hired to open and shut the valves, in an effort to make his work easier, rigged up a contrivance of strings and levers that operated the valves from the motion of the working beam over head. This made the engine automatic and marked another stage in its evolution.

This boy, Humphrey Potter, afterwards became a good workman, and was sent to Hungary to erect the first engine set up there. This valve motion was afterward improved by Henry Beighton in 1718.

This engine, as it was now constructed and continued to be until the days of Watt, consisted of an underground furnace, over which was placed a semi-spherical boiler, the flat side of which had a deep spiral groove, along which the flame and heat passed to the chimney, in which at first was no damper even. Immediately above the furnace was the cylinder, braced in place by the timbers of the building. About twelve to thirty feet above was the cistern for condensing water, from which descended a pipe to the bottom of the cylinder. Another pipe carried the water of condensation to the hot well. Henry Beighton also used this water for boiler supply. High above was the huge wooden working beam pivoted on the wall of the building. The piston was suspended from the beam by a chain that was kept central by winding on an arc on the end of the working beam. From the beam also came the rod and pegs for operating the valves. From the other end of the working beam outside the engine house, and directly over the pit mouth, was at first another chain, connecting to a single acting solid pump plunger. At first the boiler bottoms were made of copper and the tops of lead; later on sheet iron was used, but not until 1743 was cast iron used for this purpose. The steam space was eight or ten times the cylinder capacity. The third engine to be erected was at Ansthorp. It had a 23-inch cylinder, 15-inch stroke, 9-inch water plunger, and raised the water in two lifts of thirty-seven yards each. For this Newcomen was to receive $1,250 a year, for which he was to operate and keep it in repair.

In the years that followed, the size of these engines increased until Smeaton erected some with cylinders six feet in diameter. By the aid of these engines the mines could be sunk to twice the depth possible before, but the expense was very great, involving in one case $15,000 a year for coal for the engine.

It was a model of one of these engines that came into the hands of James Watt for repairs that set his mind at work upon the problem, and resulted in the modern high pressure reciprocating engine.

Newcomen himself was a man of very great modesty and worth. He was very religious, and was accustomed to preach in Baptist chapels wherever Sunday found him.

No record of his death is known, but it is supposed that with the increase of the vexations of business competition, he retired northward to private life, and died* about 1750.

[Webmaster notes:
1 Dates are presently known for Newcomen's birth and death as given at the top of this article.
2 Samuel Smiles (1812-1904), at the time a well-known author of popular biographies.
3 The ellipsis replaces this incorrect parenthetical remark: “(it is interesting to know that this is also the first recorded patent of any kind).” In fact England enacted a national patent system in 1623. Thomas Savery, for example, in 1696 was issued British Letters Patent No.347 for his invention titled, “Navigation improved; or the art of rowing ships.”]

[Wyman & Gordon of Worcester, Mass. published a monthly series of brief biographies of engineers “in place of a catalog.” The company was founded in 1883 as a Drop-Forging Works. At the time this book was published, they also advertised having a chemical laboratory and physical testing apparatus, and were available for consulting. The modern company, Wyman-Gordon, claims on their web site to be the global leader in the design, manufacture, assembly, and integration of complex metal components and products in the world. The company now has 13 plants in 5 countries, and is headquartered in Houston, Texas.]