from Pioneers of Electricity; Or, Short Lives of the Great Electricians (1890) 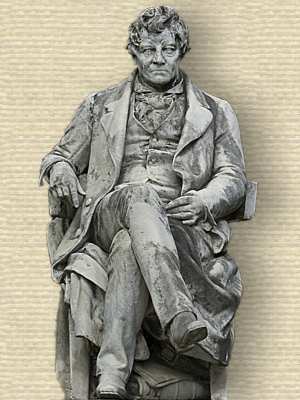 [p.179] Georg Simon Ohm was born at Erlangen, in Bavaria, on the 16th of March (or August), 1789.1 He was the eldest son of a master locksmith, whose family had settled in the town at the end of the seventeenth century. The locksmith, though a poor man, was intelligent, and had some education. In his youth, a student of the Protestant university had lodged in his father’s house, and given him lessons in arithmetic and geometry as part payment of the rent . He intended his two sons, Georg and Martin, to be locksmiths, like himself, but having learnt the value of knowledge, he determined to put them to the Gymnasium, after they had finished with the elementary school, that they might understand geometry, algebra, and physics. The cleverness of the boys attracted notice, and when, in 1804, Charles de Langstorff was appointed to the chair of mathematics, he predicted that they would be as famous some day as the brothers Bernouilli, and persuaded their father to release them from the bench and send them to the university. His prophecy has been realised, for Martin, the younger, became a distinguished mathematician, and died professor in the Military School of Berlin; while Georg immortalised his name as the discoverer of the law which governs the flow of the electric current.

With the help of a friendly bookseller at Erlangen, Georg was kept at the university for three terms. [p.180] The younger son then took his place, and he obtained a situation as private tutor in the Canton of Berne, and subsequently in Zurich, Switzerland. Returning to Erlangen in the year 1811, he passed his examination for Privat-Docent (private tutor) at the university, and was appointed to the Real Schule (School of Bamberg); but this institution was eventually closed, and Ohm was turned adrift before he could assist his father, who was growing feeble. It was the period of the wars with France, and Ohm, unable to obtain his proper employment, went back to Erlangen and worked at the vice. His Essay on Geometry, which, perhaps with some truth, was said to have been written in a room without a fire, may have helped to procure his appointment in 1817 as a teacher of mathematics in the Jesuit High School of Cologne. Ohm had the gift of teaching; but his higher aspirations led him to investigate the unknown law which regulated the flow of electricity in a conductor. Fourier had shown that the ‘flux of heat’ in a metal bar is directly proportional to the difference of temperature between its ends.2 Ohm, by analogy, and partly from experiments made with apparatus constructed by himself, found that the electric current in a conductor is directly proportional to the difference of ‘potentials’ between its ends. He further showed that with the same difference of potentials, the current in different conductors is inversely proportional to the internal resistance of the conductor. It follows that .the current obtained from a voltaic pile by connecting its poles through a wire so as to form a circuit, is directly proportional to the ‘electromotive force’ of the pile; that is to say, the difference of potentials between its poles, and inversely proportional to the internal resistance of the circuit, or, in other words, [p.181] the joint resistance of the wire and of the pile. This golden rule of the electrician is now universally known as Ohm’s law. It was heralded by contributions to the journal of Schweigger and Poggendorffs Annalen during the years 1825 and 1826, and fully published in a pamphlet entitled, Die Galvanische Kette viathematische bearbeitet (The Galvanic Chain Mathematically Worked Out), which appeared in 1827, at Berlin, where Ohm had gone on leave of absence to complete his experiments.3 Incredible as it seems, his great discovery was still-born, and the pamphlet was soon ignored. Instead of fame and fortune, it brought its author misery and contempt. Critics derided his theory or doubted his results; and, to crown all, the Minister of Education, influenced no doubt by some antagonist, plainly intimated in his official capacity that a physicist who professed such heresies was unworthy to teach science. Wounded by this cruel rebuff, Ohm resigned his chair in the High School of Cologne, and retired into private life. Through this blind injustice, six of Ohm’s best years were practically wasted at Erlangen; for though he solaced his isolation with research, he was too poor and disheartened to undertake important works. Papers of his on electrical subjects were printed in the journals of Kaestner and Schweigger, from 1829 to 1833, but they are of minor note. In the latter year the tide of his fortune began to flow again, and the Bavarian government appointed him to the chair of physics in the Polytechnic School of Nuremberg.

At length Ohm’s celebrated law, after a lapse of ten years, during which its services were lost to the world, began to find supporters; and towards the end of 1841 was publicly recognised by the Royal Society of [p.182] London, who presented its discoverer with the Copley Medal. After all he had suffered at home, he was deeply touched by this mark of confidence and honour which came to him from abroad. It roused his genius and stimulated him to further effort. The man whom his countrymen had neglected now became their pride and ornament. The hour of his triumph had come at last, and it requited him for all their past misprision.

Among other physical researches he published a pamphlet, in 1843, on the theory of the siren, and the analysis of sounds by the ear. Being deficient in the musical sense, he had made the experiments with the help of a friend. For years he had planned a great work on molecular physics, to do for atoms what Sir Isaac Newton had done for the celestial orbs. The first volume appeared at Nuremberg in 1849, and was dedicated, out of gratitude, to the Royal Society. But the work was never finished, for towards the end of the year Ohm was called to Munich as Conservator of the Physical Museum (? Library of the Academy of Sciences), and other posts which trenched upon his leisure. He became a councillor of the telegraph administration, and in 1852 the professor of experimental physics in the university. Nevertheless, he composed a text-book on physics based on the lectures to his students, and published some articles on the luminous interference of crystals, partly anticipated by Professor Landberg of Christiania. If at a former time he had too little to do, he had now too much, and his multifarious duties began to undermine his health. In the early part of 1854 he was stricken with apoplexy. Although depressed by this visitation, he continued to lecture until the 6th (or 7th) of July,4 but at ten o’clock that evening he died suddenly of another attack. Half-an-hour before he had been talking [p.183] gaily with some friends about the ill-treatment he had received while at Cologne.

‘So ended,’ says Dr. Lamont, ‘the noiseless career of a simple, modest, and highly-gifted man, who lived only for science.’5 Ohm never sought, nor did he really find, that fortune and distinction which the world mistakes for happiness. His works did not attract the attention of the vulgar, and his professional status, and the Bavarian orders of merit of Maximilian and St. Michael which he received before his death, brought no advancement in his social rank. Indeed, Ohm did not wish it. He had a purer and deeper source of happiness in his own heart, the love of truth and the desire for knowledge. The outer world hardly knew of his existence; but his scholars loved him. Fond of solitude and contemplation, he had never married; he lived in a simple, self-dependent fashion, mostly alone, and perfectly content so long as he retained his health. Only during his illness did he ever ask the help of his near relatives.

We possess no portrait of Ohm except a bad photograph taken in 1846, from which the busts in the Academy of Sciences at Munich and in the Bavarian Pantheon have been executed. He was short of stature, and the expression of his countenance was at once earnest, kind and modest. He spoke but seldom, but always pithily, and frequently with wit and humour. In estimating the work of others he was just and generous, free alike from partiality or spite.

Dr. Lamont remarks that in science as in life his position was isolated and independent, and hints that if he had been more pushing and gregarious he might have occupied a higher niche in the temple of fame. [p.184] It is indeed probable that, had his first discovery been appreciated, his retirement from Cologne averted, and his official duties in later years of a lighter kind, he might have achieved far more. Still, it is hazardous to speculate on what might have been. Let us be thankful for what he did accomplish.

Since 1861 electricians have called the practical unit of electrical resistance by the name of ‘Ohm,’ and in 1884 the term was definitely adopted internationally by the Congress of Electricians which met in Paris. This commemoration of his services is to be supplemented by a public statue in the city of Munich, and a memorial tablet fixed upon the house where he was born.

[Footnotes have been moved from the bottom of their associated pages, renumbered, and gathered together here.]
1 Both dates are given.
2 Théorie Analytique de la Chaleur.
3 An English translation of Die Galvanische Kette was published in 1841, and appears in Taylor’s Scientific Memoirs.
4 Both dates are given.
5 Dr. Lamont, Conservator of the Royal Observatory, Munich: Denkrede auf die Akademiker Dr. Thaddäus Siber und Dr. Georg Simon Ohm. Munich, 1855.