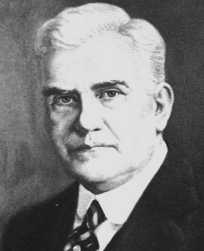 Michael Owens was a glass manufacturer who invented an automatic glass bottle manufacturing machine that revolutionized the industry. His mechanization of the glass-blowing process eliminated child labor from glass-bottle factories, which he had himself experienced from the age of ten. To help provide income for his coal-mining family, Owens joined a glasworks at that age, where he stoked coal into the “glory hole” of the furnace used to resoften glass during the several stages of the hand-formed process. Within a few years, at age 15, he had graduated to the job of glass-blower.

In 1888, he moved to Toledo, Ohio, where he worked at the glass factory of Edward Drummond Libbey, and shortly became its superintendent. It produced high-quality consumer items, including cut glassware, which he demonstrated at the company's exhibit during the World's Columbian Exposition in Chicago in 1893.

He had already started experimenting with a piston-pump to first suck molten glass into a mold to gather a correct measure of the material and then to transfer it to a second mold into which it was blown by reversing the pump. Although the initial results were crudely formed, he was ready to take out patents in 1895 (No. 534,840; 548,587; 548,588). Owens designed machines to manufacture lamp-chimneys and tumblers.

Together with Libbey and others, Owens formed the Owens Bottle Machine Company in 1903. With continued development and improvements, by the time he obtained patent No. 774,690 on 8 Nov 1904, he had a machine capable to producing four bottles per second.

He was ready to expand the business, and in 1905 opened a factory in Manchester, England. 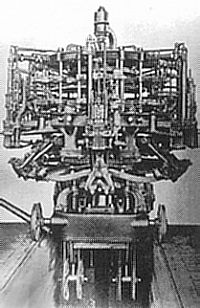 Owens’ machines could be built with from six to twenty arms, each blowing a bottle. The machine would cut loose the finished piece and deliver it to a conveyor taking it to the annealing oven. Since a fifteen-arm machine could do as much work as originally done by a dozen or more skilled glassworkers, depending on the size and shape of the product, there was a dramatic saving in labour costs. One version of his bottle-blowing machine, the “AR,” contained 10,000 parts and weighed 50 tons.

Meanwhile, Libbey and Owens had helped fund Irving W. Colburn, who since 1900 had been working on a machine capable of continuously drawing flat sheet glass. In 1912, they bought the patents to this machine, which Owens perfected, and the Libbey-Owens Sheet Glass Company was opened in 1916 to make window glass.

While Owens continued as the inventor, Libbey worked with investors and licensed the inventions to other bottle manufacturers.

From 1919, he retired from day-to-day management of his company to focus his time on inventing. He eventually held 45 U.S. patents, either independently or jointly with others.

In 1983, the American Society of Engineers designated one of Owens’ “AR” bottle-blowing machines as an International Historic Engineering Landmark. A modern-day version contains 30,000 parts and can produce a million bottles a day.