Paracelsus
“Alchemy is the art…” 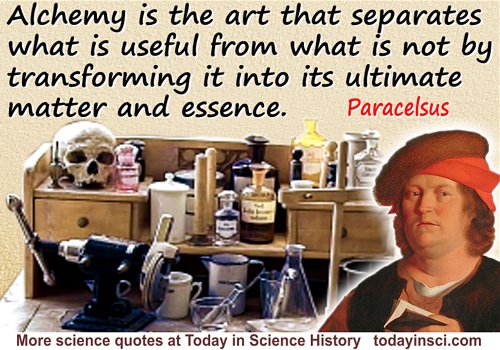 “Alchemy is the art that separates what is useful from what is not by transforming it into its ultimate matter and essence.”
— Philippus Aureolus Paracelsus
from Labyrinthus Medicorum.

This translated quote is given in a book on Paracelsus by Walter Pagel. It appears in a paragraph concerning how Paracelsus used the term “Prime Matter” as an immature material which is worked upon and converted into a finished product “ultimate matter” by the chemist.

All objects in nature undergo at some time a transmutation from a “prime” through an “intermediate” towards an “ultimate” stage—the latter indicating the final fulfilment of destiny, the Aristotelian “perfection” or “entelechia” of an object. This transmutation is brought about by alchemy—the alchemist being Nature itself or man helping to promote a natural process to its end. There is the example of bread. Its “prime matter” is the grain as supplied by nature. It becomes “middle matter” in the oven. It is the inner alchemist of man (“Archeus”, “Vulcanus”) who converts it into “ultimate matter”—namely flesh and blood. In terms of alchemy the conversion of primary into intermediate and final matter can also be regarded as one of disease, into the decline and death of an object. “Prime matter” may also be seen as the product of putrefaction, for this causes the seed to germinate in the soil. Intermediate matter can be visualised as a result of the consumption of prime matter, while ultimate matter is “powder and earth”. “Alchemy is the art that separates what is useful from what is not by transforming it into its ultimate matter and essence.”