Animal Cruelty? No!
Piccard “Defanged” a Rosebush, Not a Dog!

Professor Auguste Piccard became world famous for his pioneering balloon flights more than ten miles above the earth for the study of cosmic rays. Yet, in 1933, when he planned a visit from Brussels to America, there were efforts to bar him for alleged cruelty to animals. Reports had been published in the U.S. that raised a storm, alleging (falsely) that he had pulled out the teeth of a neighbor's dog, because the animal annoyed his children. Members of a society for prevention of cruelty to animals had raised objections, and demanded that he be prevented from entering America. 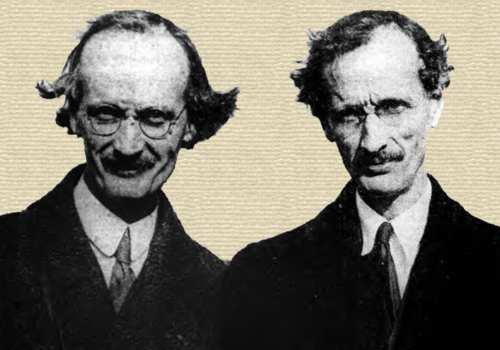 Prof. Auguste Piccard (L.), of stratosphere fame, smilingly posed on his arrival in America. He was greeted by his twin brother Jean, to whom he bears a striking resemblance. The professor said efforts to bar him from the United States for alleged cruelty to animals were based on a false report. Picture by International News Photgraphic Service. (source)

On 12 Jan 1933, Piccard arrived in New York aboard the Champlain, and gave an interview to reporters and motion picture men in a dining room on the ship, and answered a battery of questions.

Before he took up cosmic rays and scientific subjects, he felt compelled to spend his time first to emphatically deny the false story about the dog. He was reported by the Universal Service Science Editor as addressing the issue, speaking in English “with a marked German accent,” and “with heat and vigorous gestures.”

“All rubbish! I told an inquisitive journalist that I had broken off thorns from garden rosebushes, because they would scratch children. That imaginative and insatiable journalist substituted dog for rosebush and teeth for thorns. I'm not a dog dentist, nor what you call veterinarian. Why should I try to pull a dog’s teeth? Besides. I am a great lover of animals.”

In the news report, about the malicious gossip, “Dr. Piccard compared this flurry to the similar opposition recently offered, on other grounds, to Dr. Einstein’s presence in this country.”

The news report continued by outlining his scientific projects, theories and accomplishments in brief, quoting what Piccard said as:

“My main object in coming to America, besides wanting to see this country, is to meet your great scientists, like Professor Millikan and Dr. Compton, also Dr. Einstein, who is now here. I wish to visit your noted laboratories besides.

“Some American scientist should make a flight in a balloon to the stratosphere, upper atmosphere, in or near Hudson Bay. which is the region of the North (Magnetic) Pole. I shall be glad to lend my balloon, and even the Swiss pilots who took me more than 10 miles high.

“With cosmic rays measuring apparatus, this scientist could definitely determine whatever effect the magnetic lines of the earth produce upon cosmic rays.

“Such a thing could be done by 1934, and I shall suggest it to American scientists.

“As to rocket ships flying between America and Europe. I believe it worth seriously trying for. Thirty years ago persons who were developing flying were laughed at as mad. and that scorn hindered aviation. Now we heap similar ridicule upon stratoplane or rocket ships for trans-Atlantic flights.”

Also of interest, the article introduced Dr. Piccard as 48, six feet tall, and speaking in English “with a marked German accent.” Because he was vigorously opposed to smoking, which “makes him sick” Piccard insisted that while talking to the reporters in the children's dining room, nobody was to be allowed to smoke. He called it “a dirty habit that should be banned from America by the government instead of alcoholic drinking.” (By a Constitutional Amendment, Prohibition of alcohol in America was in effect at that time.)

Aside:— Eighty years later, one can easily envisage a roundtable of irresponsible talking heads on Fox News blathering on for days before Piccard’s arrival, spewing nonsensical speculation and infallable self-righteousness on the execrable results of animal abuse. Such media never miss an opportunity to let facts stand in the way of an attention-grabbing story, while narcissistic mental pygmies monopolize airtime to misinform public opinion. (And you know which President they all would with loud derision blame for this monstrosity, while not just perversely demanding, but DEMANDING, that he deny a visa to this scumspawn scientist!)

You might read the paragraph above as merely humorous. (Admit it—you imagined the picture and heard the echoes of brain-dead TV commentary as you read it.) But reflect! Piccard was coming to America for scientific purposes. Yet the media story focus began with trivialties. Nowadays, a mogul with a squirrel-tail stapled to his forehead is given endless airtime to pontificate on the denial of climate change. Meanwhile, honest scientists are given short shrift.

As we now experience, Piccard was prescient in his opinion of smoking, repeal of Prohibition, routine high-altitude jet passenger transatlantic aircraft flights, and improved knowledge of the Earth's magnetic field shield from bursts of cosmic particles (as from solar flares). But could he ever have anticipated the concerted war on science seen now in certain media, in research defunding and job-killing Republican politics, and the manipulation of public opinion by self-serving spending by millionaires and billionaires? Or, such an extensive public apathy or misinformed skepticism buying into it?

In Piccard's time, the public was excited by scientific advances. Notice how the names of Millikan and Compton stood with respect alongside that of Einstein. Back then, the manufactured fuss about animal cruelty was a distraction that was dispensed with. Contrast that with now, with the traction of climate change denial and creationism holding textbooks hostage.