An Untold Romance of Invention 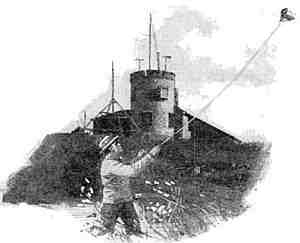 [p.31] But for an odd accident that happened to Greenleaf Whittier Pickard—radio engineer—one spring morning at Cape May, N.J., in 1902, the amazing era of wireless progress through which we have just passed might have been set back dozens of years.

Inventor of the crystal detector, and a notable figure in recent radio history, whose real contributions to the present situation are yet almost unrecognized by the general public, Mr. Pickard has had a career that fits with amazing fidelity the traditional scenario of the great American “success” story.

A grandnephew of the poet Whittier, the future radio inventor knew in his early days the inky life of printer's devil, on the Portland, Me., Transcript, his father's newspaper. And later, as in all good romances of this kind, from Benjamin Franklin's down to date, the youthful Pickard not only wrote parts of the paper, but set type on his own copy. Later, and again like Benjamin Franklin, he took to flying kites in the interest of science. This was after a college course, during which chemistry and a complicated geological theory preempted the youthful Pickard mind. It is strange that one of the most notable joint creators of the vast radio industry of today should have entered that particular field of endeavor through an effort to help future generations—literally a thousand years, or more, hence—determine if the ice ages of hundreds of thousands of years ago were caused by variations in the carbon dioxid content of the earth's atmosphere.

A Genius for Wireless

In pursuit of the facts that, when tabulated through countless generations, would help prove or disprove this particular hypothesis, Pickard, fresh from Massachusetts Institute of Technology, went to the Blue Hill Observatory, Milton, Mass. While he was there engaged in fishing down the secrets of the upper air with kites, the Smithsonian Institute asked the Blue Hill Observatory to conduct experiments that would show the effect of aerial height on wireless transmission. Pickard being on the ground, was thus, by accident, drawn into wireless work. So marked was the genius that he showed in the succeeding experiments, that a few years later the American Telephone and Telegraph Company, anxious to develop, if possible, a wireless telephone, called him to help in their laboratories. And it was in the Bell Telephone Company offices—Milk Street, Boston—that on September 2, 1902, Mr. Pickard uttered into his own primitive, weirdly conceived transmitter what is said to have been the first spoken sentence ever transmitted by radio. No historic phrase was his. "How do you get me?" he said. They got him well; tone and modulation were good.

Somewhat earlier, Mr. Pickard had directed the establishment of a wireless telegraph station at Cape May, N.J. And here it was that, on May 22, 1902, he made, by sheer accident, plus an observant eye and keenly thoughtful mind, his most famous discovery. He was working that day with a detector consisting of fine sewing needles laid lightly across a pair of carbon blocks, in series with three cells of a dry battery and a telephone receiver.

“Being exasperated by the microscopic ‘fry’ of my detector,” he relates the incident, “I attempted to check the annoyance by cutting out two of the three dry cells. The signals continued to come in, weaker, but clear. Suddenly, to my utter amazement, as I glanced over the apparatus I discovered that I had cut out not two but all three dry cells! My telephone diaphragm was being operated solely by the energy received on the aerial! Nobody believed at that time that such a thing was possible."

Birth of the Crystal Detector 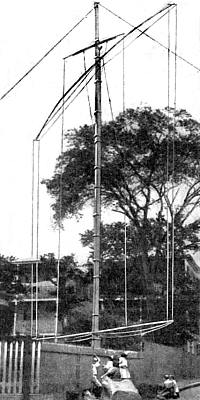 Here was the accident that resulted in the development of the crystal detector as commonly used today. Followed brain work and incredibly patient effort. Handling two jobs in Boston in the daytime, and working, at home late into the night over his own experiments, with only five hours' sleep in 24, for months on end, Pickard not only developed the crystal detector as we know it now, but carried on a wide range of other wireless work, in the course of which he erected the world's first radio compass—a huge and gawky affair, nearly 20 feet on the side. A United States Navy officer was sent to inspect it, and was inclined to scoff at its size. “How could we use an affair like that on shipboard?” he asked. Pickard, undaunted, continued his radio compass work, and later perfected the first portable loop aerial.

It is an interesting fact that from 1906 on, the inventor's radio laboratory was established in the old home, at Amesbury, Mass., of another famous man of the same family—John Greenleaf Whittier.

Meanwhile, as a result of the Cape May accident, Mr. Pickard was carrying on his experiments with minerals that in contact would prove to serve as detectors for radio signals. He tried out literally thousands of substances, and discovered about 250 [p.90] minerals and furnace products that would operate as detectors.

It was following this period of experiment that Mr. Pickard perfected and patented the receiving circuits and the various types of contact and mounting for crystal detectors upon which is based his chief claim to fame as inventor of the crystal detector, and around which we may shortly see exciting legal warfare in the courts.

Another chapter in the drama:

About 1904, the DeForest Company, for which Mr. Pickard had become consulting expert, was taking the lead in radio communication, since with its ship installations it was showing wireless ranges of something like 600 miles, while its chief competitor, the Marconi Company, was able to handle messages over ranges of only about 200 miles. The DeForest operators were achieving their greatest records by use of the then widely employed electrolytic detector. Another company owning the so-called “Fessenden patents” on this detector, secured an injunction to stop its use by DeForest, and the De Forest Company at once faced seeming annihilation.

To their rescue came Gen. H. H. C. Dunwoody, with his so-called carborundum detector, a piece of carborundum wrapped with wire and contained in a fuse-shaped tube. Finally, to their further rescue, Mr. Pickard was summoned. The New England radio genius came and promptly showed the DeForest people how to make General Dunwoody's crude carborundum detector really work satisfactorily. He disclosed the radical and ingenious contact principle that he, himself, had been quietly developing for several years.

The DeForest Company breathed again. The crystal detector, had saved wireless from the grip of monopoly. After the hard times money from the sale of Mr. Pickard's new crystal detectors to the government and others began to come in. In 1907 he founded, with two others, the Boston company for which he is consulting engineer—one of the oldest radio companies in America.