by Colin Powell
Excerpt from My American Journey 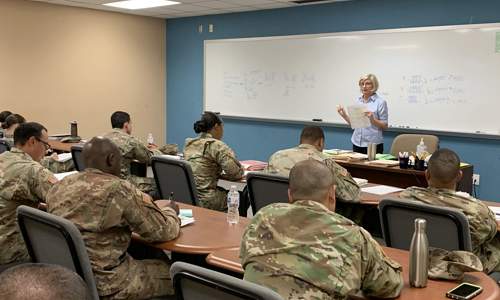 One morning at a commanders call, General [“The Gunfighter”] Emerson announced, “Everybody in this division is going to be a high school graduate.” Probably half of our troops were dropouts. Many had never succeeded at anything, never stuck to or completed a task, beyond enlisting in the Army or getting drafted. We were to find teachers, start classes, and prepare these men to take the GED, the General Educational Development program. And they’d damn well better pass.

We scoured the countryside, hired American wives whom some soldiers had brought to Korea at their own expense. We hired American civilians and assigned qualified officers and noncoms to teach. We set up classes in barracks, rec rooms, day-rooms, and supply rooms. From 3:00 p.m., when the men came in from field training, until supper, they were in class, studying

English, math, science, and history. When the general asked what percent of our eligible soldiers were enrolled in the program and we reported 85 percent, he said, “Dammit, where’s the other fifteen?” As Gunfighter saw it, the U.S. Army had entered into a contract with these young people. We had told them that the Army would make something of them, give them something useful to take back to civilian life. If they left without an education, they were headed back to the bottom of the heap.

[Think about this — every school, every teacher, in a sense, has entered into a contract for their young students. Colin Powell reminds us that the goal for any school and any teacher is always to be there for each student, to “make something of them, give them something useful to take back to civilian life.” Colin Powell was one of the finest Americans. He made something of himself. His words are worth remembering when they are needed most. Perhaps worth posting on a classroom wall? —Webmaster]