“Environmental extremists ... wouldn’t let you build a house unless it looked like a bird’s nest.”
— Ronald Reagan
As quoted by Kathy Koch, newspaper columnist, for example, as seen on an op-ed page in a Lakeland, Florida, newspaper, as 'Candidates Come Clean on Environmental Positions', The Ledger (25 Oct 1980). 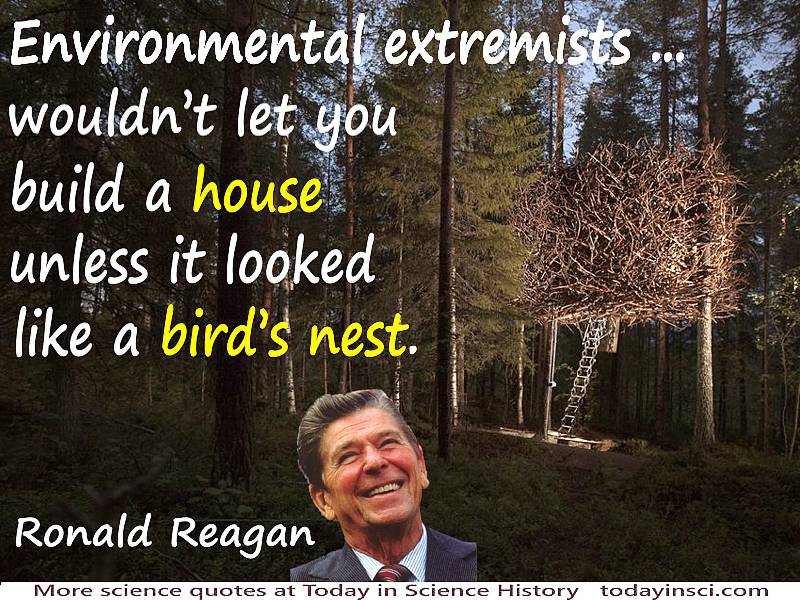 The Context of the Bird's Nest House Quote

In 1980, ex-actor Ronald Reagan, having been Governor of California (1967-1975), was running as a Republican candidate for President against the re-election of President Carter. In early Oct 1980, newspapers had reported his embarrassing somersaults on environmental pollution. He flip-flopped to different audiences when speaking in four states within 24 hours, before returning to a choked Los Angeles smog that had lasted 12 days. An editorial described the L.A. smog as “its worst air pollution alert in recent history.” But in Ohio, Reagan had declared that air pollution “has been substantially controlled.”

The editorial1 in the St. Petersburgh Times (11 Oct 1980) criticized Reagan as “eager to abandon wholesale the hard-won national committment to clean up America's air and water,” and that

“tracking Reagan's political philosophies is a bit like following the bouncing ball in those sing-along short subjects that often played with his movies in the 1930s and ’40s.”

Two weeks later, the op-ed page of the Lakeland, Florida, Ledger carried a column by Kathy Koch, who further pointed out how Reagan's gaffes about the causes of air pollution had made it an issue on the campaign. She quoted Gus Speth, chairman of President carter's Council on Environmental Quality (CEQ), as saying at a press conference (16 Oct 1980),

“How can someone who doesn't understand the fundamentals of air pollution control—who was governor of a state for 12 years with one of the worst air pollution problems in the country—give world leadership to complicated global problems?”

Whereas, according to the columnist, Reagan “promised coal and steel industry officials that they could help rewrite the Clean Air Act so that it doesn't stifle their industries,” he justified his position as merely the need to provide some “balance” and “common sense.”

In this context, the Washington columnist exemplified his disrespect for the Environmental Protection Agency by quoting Reagan's words from 1976 as belittling “environmental extremists … (who) wouldn't let you build a house unless it looked like a bird's nest.”

“I think we have two groups of [environmental] extremists. There are, of course, those people on one side who would pave the country over in the name of progress. There is an extremist group on the other extreme you build a house unless it looked like a bird's nest. Now I think there has to be a commonsense in-between that recognizes that the people are ecology, too.”

No doubt, Reagan recycled his cynical wit on different occasions. Columnist Tom Wicker appears on the op-ed page of a May 1980 issue of a Eugene, Oregon, newspaper. Referring to a Reagan appearance in Eugene a few days earlier, the writer was critical of “some University of Oregon students who were pounding him with hostile (and remarkably uniformed) questions.” Also, later in the column: “In the face of student hostility, Reagan also insisted on ‘the difference between true environmentalism and emotional extremism’—which he defined as the attitude of ‘peoplle who don't want to build a house unless it looks like a bird's nest.’ People, he reminded the students, ‘are ecology too. They need houses and jobs.’”5

In Reagan's own words, from a letter he wrote for Mr. Bright some time after Jan 1967 (while he was Governor), he referred to how he had held

“a question and answer session with a high school class (a regular weekly practice). These young people asked questions that revealed a tendency to believe California was in immediate danger of total destruction. We engaged in a philosophical discussion in which I attempted to show them that we had to strike a reasonable balance. … I said there were two extremes, both wrong—those who would cover the state with concrete in the name of progress and those who wouldn’t let you build a house unless it looked like a bird’s nest. In between I told them was the vast majority who wanted to achieve a commonsense balance. ... These sessions, unfortunately, are covered by the wire services. What was a philosophical rap session with some bright (but uninformed) young people was reported in the press as administrative policy. I’ve made no secret of the fact (although this didn’t come up in the discussion) that I am worried lest our concern with the environment seriously erode our traditional right of private ownership.”6

One may reflect on whether each characterization of the students as “uniformed” clearly shows an insensitivity toward their valid concerns and insights.

Of course, when Reagan became President, what he viewed as merely “balance” was when industry and special interests were allowed to tip the scales. The legacy of his actions while in office were a total about-face from President Carter's sincere concern for the environment, development of renewable energy, and vehicle fuel efficiency, among other truly common-sense objectives.

Written by the Webmaster.