[Years before Isaac Newton, Shakespeare seems to write about the attraction of Earth's gravity.] 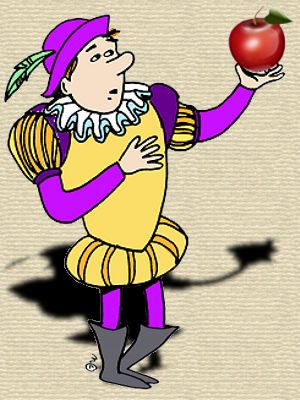 [p.1006]——Akin to the popular errors by which events are misconstrued, and the thoughts of eminent men are perverted, is the tendency to attribute to such men actions which they did not perform, and discoveries which they did not make, their acts and discoveries having merely had some connection more or less direct with that with which they are popularly credited. For example, there is probably not one man in a thousand, even of those who are called educated, who, if asked who discovered the attraction of gravitation, would not reply, “Newton.” Hence it is that a recent letter to the Pall Mall Gazette, upon the following passage in Shakespeare's Troilus and Cressida has attracted so much attention. Cressida, speaking to Pandarus, says of her love for Troilus:

But the strong base and building of my love
Is as the very centre of the earth,
Drawing all things to it.

The idea she seems to have borrowed from her lover, for Troilus had previously said to her that his love is

As true as steel, as plantage to the moon,
As sun to day, at turtle to her mate,
As iron to adamant, as earth to centre.

There is no gainsaying this: the attraction of gravitation could not be more clearly expressed; and the conclusion drawn by the Pall Mall Gazette's correspondent, and so generally repeated and concurred in, that “it would really seem as if Shakespeare had anticipated Newton by a hundred years or so in the discovery of one of the greatest natural truths,” cannot be avoided by those who have credited Newton with that discovery.

It is noteworthy that these interesting passages occur in a drama, which, for its wisdom, is the most wonderful and admirable of all that Shakespeare wrote. Little read, even in the circle of Shakespeare's readers, it is yet one of the most delightful of his works, and is of all of them the one that exhibits, in the most impressive and sententious style, his surpassing and all-comprehending knowledge [p.1007] of men and things.

But, notwithstanding the passages above quoted, this play does not transfer the credit of the discovery of the attraction of gravitation from Newton to Shakespeare, or bring the claims of the poet and the astronomer at all into collision. For Newton did not discover the attraction of gravitation, and never claimed the discovery, which, indeed, it would have been most absurd for him to do. That there was a power at the very centre of the earth drawing all things to it, was known centuries before Newton's time, and the knowledge is referred to by many writers who were not naturalists—the poet Dante among the number. Not only so, but Kepler, who lived a century before Newton and was cotemporary with Shakespeare, recognized the attraction of gravitation as a force operating mutually between the planets. Hooke and Halley, before Newton announced his discovery, declared that the heavenly bodies had a gravitation toward each other, and had even begun investigations to determine the mode of the action of this force.

What was it, then, that Newton did discover, and which has made his name famous in the annals of astronomy?

Of this law Shakespeare had no more knowledge than he had of that which governs the action of the electric fluid, and of which the whole scientific world is yet profoundly ignorant.