from Library of Universal History (1897) 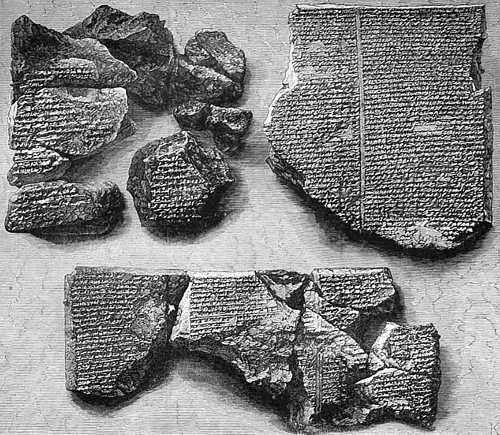 The legend found recorded on the tablets states that the god Hea commanded Sisit to build a ship of specified size and to launch it on the deep, as he intended to destroy the wicked, Then Hea said: “When the flood comes which I will send thou shalt enter the ship, and into the midst of it thou shalt bring thy corn, thy goods, thy gods, thy gold and silver, thy slaves male and female, the sons of the army, the wild and tame animals; and all that thou hearest thou shalt do. And Sisit gathered together all his possessions of silver and gold, all that be bad of the seeds of life, and caused all of his slaves, male and female, to go into the ship. The wild and tame beasts of the field also he called to enter, and all the sons of the army.

And Shamas, the Sun-god, made a flood, and said: ' I will cause rain to fall heavily from heaven: go into the ship and shut the door.' Overcome with fear Sisit entered into the ship, and on the morning of the day fixed by Shamas the storm began to blow from the ends of heaven, and Vul thundered in the midst of heaven, and Nebo came forth, and over the mountains and plains came the gods, and Nergal the Destroyer overthrew, and Nin came forth and dashed down; the gods made ruin; in their brightness they swept over the earth. The storm went over the nations; the flood of Vul reached up to heaven; brother did not see brother; the lightsome earth became a desert, and the flood destroyed all living things from the face of the earth.

Even the gods were afraid of the storm, and sought refuge in the heaven of Ana; like hounds drawing in their tails, the gods seated themselves on their thrones, and Ishtar, the great goddess, spake: 'The world has turned to sin, and therefore I have proclaimed destruction. I have begotten men, and now they fill the sea like the children of fishes.' And the gods upon their seats wept with her. On the seventh day the storm abated, which had destroyed like an earthquake, and the sea began to dry. Sisit perceived the movement of the sea. Like reeds floated the corpses of the evil-doers and all who had turned to sin. Then Sisit opened the window, and the light fell upon his face, and the ship was stayed upon Mount Nizir, and could not pass over it.

Then on the seventh day Sisit sent forth a dove, but she found no place of rest, and returned. Then he sent a swallow, which also returned; and again a raven, which saw the corpses in the winter and ate them, and returned no more. Then Sisit released the beasts to the four winds of heaven, and poured a libation, and built an altar upon the top of the mountain, and cut seven herbs, and the sweet savor of the sacrifice caused the gods to assemble, and Sitit prayed that Bet might not come to the altar. For Bel had made the storm and sunk the people in the deep, and wished in his anger to destroy the ship, and allow no man to escape. Nin opened his mouth, and spoke to the warrior Bel: 'Who would then be left?' And Hea spoke to him: 'Captain of the gods, instead of the storm let lions and leopards increase, and diminish mankind; let famine and pestilence desolate the land and destroy mankind.'

When the sentence of the gods was passed, Bel came into the midst of the ship and took Sisit by the hand and concluded him forth, and caused his wife to be brought to his side, and purified the earth, and made a covenant; and Sisit and his wife and his people were carried away like gods, and Sisit dwelt in a distant land at the mouth of the rivers.”


Image added (not in original article) from source shown above. The original text was set as one paragraph. Breaks have been added for this web page to improve readability. From Israel Smith Clare and Moses Coit Tyler, Library of Universal History: Containing a Record of the Human Race from the Earliest Historical Period to the Present Time (1897), Vol. I, Ch. II, Section V, 122-123. (source)