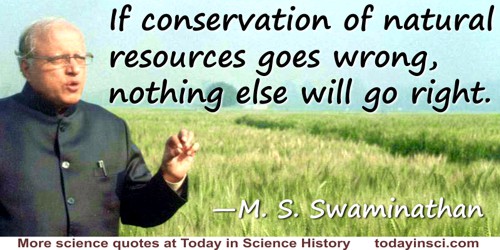 “If conservation of natural resources goes wrong, nothing else will go right.”
— M. S. Swaminathan
As quoted in India Today (2008).

This is an example of the frustrating kind of quote for which a primary source can’t be easily found. However, similar constructs can be found for Swaminathan, and specifically cited from print sources.

For example, this quote comes from an address delivered in 2006 to the International Rice Congress, titled 'Science and Shaping the Future of Rice':1

“If farm ecology and economics go wrong, nothing else will go right in agriculture.”

Swaminathan’s belief about agriculture as being critical for “the country” was quoted in an article in the Journal of Plantation Crops (2002).2 He wrote the same in his own words in a chapter on 'Food Security', in Combating Hunger and Achieving Food Security (2016), ending with wording “in our country”, referring to India.3

“If agriculture goes wrong, nothing else will have a chance to go right in our country.”

This echoes what Swaminathan wrote a few years earlier, in 'Malthus and Mendel: Children for Happiness' (1997), referring to population policies):4

“Population stabilization policies are a must for sustainable food, health, and livelihood security in many developing countries. If population policies go wrong, nothing else will have a chance to succeed.”

In his 2015 book, In Search of Biohappiness: Biodiversity and Food, Health and Livelihood Security, Swaminathan traces his above ideas about the pivotal importance of agriculture back to January 1968:5

“It was in 1968 that the term Green Revolution was coined by Dr. William Gaud of USA to describe advances in agriculture arising from productivity improvement. Even in 1968, I concluded that if farm ecology and economics go wrong, nothing else will go right in agriculture. I expressed my views in the following words in my lecture at the Indian Science Congress Session held at Varanasi in January 1968:

Exploitive agriculture offers great dangers if carried out with only an immediate profit or production motive. The emerging exploitive farming community in India should become aware of this. Intensive cultivation of land without conservation of soil fertility and soil structure would lead, ultimately, to the springing up of deserts. Irrigation without arrangements for drainage would result in soils getting alkaline or saline. Indiscriminate use of pesticides, fungicides and herbicides could cause adverse changes in biological balance as well as lead to an increase in the incidence of cancer and other diseases, through the toxic residues present in the grains or other edible parts. Unscientific tapping of underground water will lead to the rapid exhaustion of this wonderful capital resource left to us through ages of natural farming. The rapid replacement of numerous locally-adapted varieties with one or two high-yielding strains in large contiguous areas would result in the spread of serious diseases capable of wiping out entire crops, as happened prior to the Irish potato famine of 1854 and the Bengal rice famine in 1942. Therefore, the initiation of exploitive agriculture without a proper understanding of the various consequences of every one of the changes introduced into traditional agriculture, and without first building up a proper scientific and training base to sustain it, may only lead us, in the long run, into an era of agricultural disaster rather than one of agricultural prosperity.

The above analysis led me to coin the term “evergreen revolution” to describe the enhancement of productivity in perpetuity without associated ecological harm.”