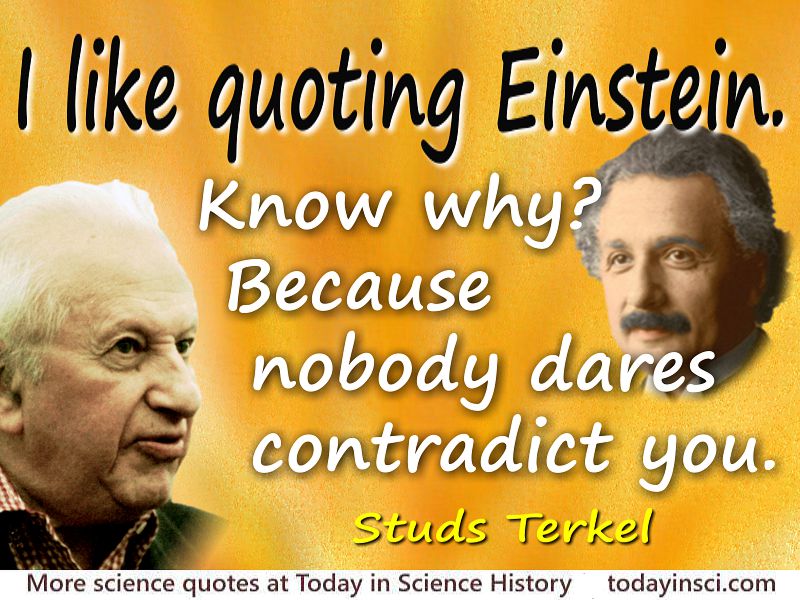 “I like quoting Einstein. … Because nobody dares contradict you.”
— Studs Terkel
Interview in The Guardian (2002)

This quote by Studs Terkel may not be the first time somebody expressed this idea. However, it serves to remind us that a fair number of quotes circulating on the web are falsely attributed to Einstein. Any bons mots suggesting intelligence might be attributed to Einstein, whether he said them, or not. Few people take the time to question the reliability of the source.

In 2002, the prolific interviewer, Studs Terkel, shortly before his 90th birthday, was himself answering questions from Oliver Burkeman, for an article published in the London newspaper, The Guardian. Describing Terkel, in the reporter’s words, “The wall-to-wall displays of patriotism in America today leave him cold. The war against terrorism needs a new approach.” He then quoted Terkel's comment, “You know, power corrupts, and absolute power corrupts absolutely'? It's the same with powerlessness. Absolute powerlessness corrupts absolutely.

Einstein said everything had changed since the atom was split, except the way we think. We have to think anew. I like quoting Einstein. Know why? Because nobody dares contradict you.”

Webmaster fondly remembers similar advice in a book read back in high school, saying that for English composition exams, a passage can be made more interesting by adding a quote by Winston Churchill. The author said write anything that sounded good, since the examiner couldn't know everything Churchill had ever said, and was too busy grading papers to look up your fictional quote. Terkel at least was correctly summarizing an Einstein quote, though not his actual words.

The actual Einstein quote to which Terkel referred appeared in The New York Times (25 May 1946). The article stated that Einstein “issued a personal appeal yesterday by telegram to several hundred prominent Americans”. In part, he wrote:

“Our world faces a crisis as yet unperceived by those possessing power to make great decisions for good or evil. The unleashed power of the atom has changed everything save our modes of thinking and we thus drift toward unparalleled catastrophe.”

There are many more authentic Einstein quotes. But remember to take care when reading an “Einstein” “quote” on the web. Some are spurious, and yet are unquestioned and passed along in blogs and in much-forwarded email messages.