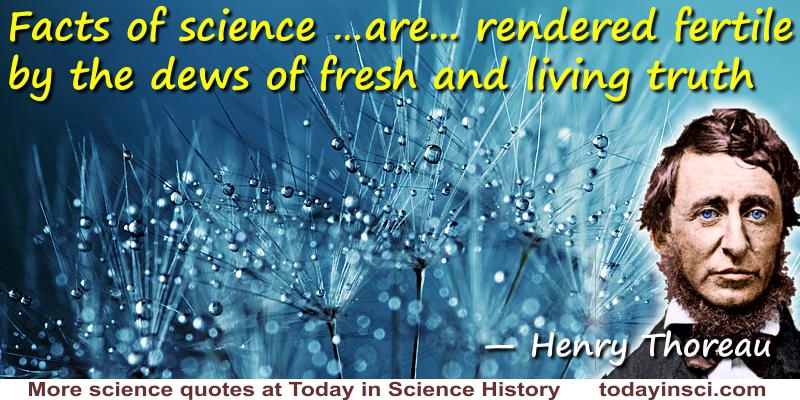 “Even the facts of science may dust the mind by their dryness, unless they are … rendered fertile by the dews of fresh and living truth.”
— Henry Thoreau
In Yankee in Canada (1863)

Henry Thoreau’s essay, “Life Without Principle,” originated as a lecture titled “What Shall it Profit.” delivered at Railroad Hall in Province, Rhode Island (6 Dec 1854), four more times in Massachusetts in 1855, plus once in New Jersey in 1856.

Before he died, Thoreau edited his lecture for publication, and when it appeared posthumously in the Atlantic Monthly of Oct 1863, it was entitled “Life Without Principle,” by which we now know it. The essay was then included in a collection published under the title of A Yankee in Canada (1866).

The essay has been described by Walter Harding as “pure Transcendentalism, a plea that each follow his own inner light.”1 The subject quote is part of a stream of ideas, with no further development of the reference to science, as can be seen in a short passage in which it appears:

We should treat our minds, that is, ourselves, as innocent and ingenuous children, whose guardians we are, and be careful what objects and what subjects we thrust on their attention. … Even the facts of science may dust the mind by their dryness, unless they are in a sense effaced each morning, or rather rendered fertile by the dews of fresh and living truth. Knowledge does not come to us by details, but in flashes of light from heaven. Yes, every thought that passes through the mind helps to wear and tear it, and to deepen the ruts, which, as in the streets of Pompeii, evince how much it has been used. How many things there are concerning which we might well deliberate whether we had better know them, — had better let their peddling-carts be driven, even at the slowest trot or walk, over that bridge of glorious span by which we trust to pass at last from the farthest brink of time to the nearest shore of eternity!