from Transactions of the American Institute of Electrical Engineers (1892) 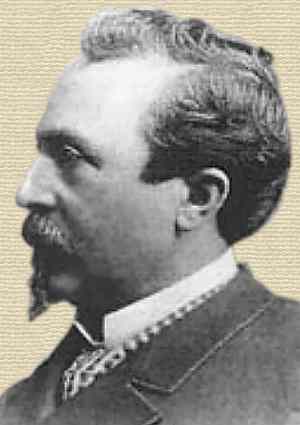 [p.175] Charles Joseph Van Depoele was born in the Province of West Flanders, Belgium, in the year 1846. His birthplace was the small place of Litchervelde, situated about sixty miles northwest of the city of Brussels. He died in Lynn, Massachusetts, March 18th. 1892. His death occurred after a sickness of four months, and it was, primarily, due to heart failure. Mr. Van Depoele was elected an Associate Member of the Institute, June 5th, 1888, and transferred to full membership September 7th, 1889.

When about ten years old young Van Depoele saw the telegraph system of the East Flanders railway installed, and as his father was master mechanic of the road he had an opportunity of studying into the mysteries of the working of the telegraph) which he was not slow in doing as he had early acquired a taste for natural philosophy, and read with avidity all works within reach. His taste for machinery was, undoubtedly, inherited from his father and his familiarity with the use of tools was of great advantage to him in his early work. We find him at the age of fifteen or sixteen years building telegraph instruments, Ruhmkorff coils, and going so far as to construct a Bunsen battery of forty cells. In this work he did not receive the encouragement of his father, who was very much opposed to his son spending his spare time in this way. His father apprenticed him to a cabinet-maker and he mastered the trade in a remarkably short time.

In 1864 his father moved to Lille, France, where young Van Depoele became interested in sculpture and worked for some time in the works of Buisine-Rigot, where more than two hundred sculptors were employed. He distinguished himself by making an immense piece of carved work some eighty feet in height, an altar-piece for a large cathedral. During this time, however, his spare moments were spent either reading electrical books or building and experimenting with electrical apparatus. His [p.176] father strongly disapproved, and thought his time and labor might be better spent.

When about twenty-three years old he decided to come to America, and he arrived in Detroit in the summer of 1869. He immediately engaged in the church furniture business, but the success of this venture did not make him forget or lose interest in his electrical experiments, but the income allowed him to begin experiments of greater magnitude than he had hitherto attempted. By the aid of a large Bunsen battery he began experiments with arc lamps, and later when the description of the Gramme, machine was published he built a model of it. Outside of lighting his workshop, his first commercial work was done in 1878 when he furnished arc lights for Forepaugh’s Circus, at Campas Park, using for this purpose a three light dynamo. The front of the Detroit Opera House was lighted by him during the same year. This practical work led directly to the organization of a stock company with a capital of $125,000. The company immediately started the manufacture of electric light apparatus at Nos. 29 and 31 Atwater street, and they soon had a number of successful plants in operation on excursion boats running on the Detroit River.

About this time he began to pay attention to electricity as a motive power, and during the year 1880 did a great deal of experimenting. He experimented with pieces of carbon for collecting the current from the commutator of dynamos. During the latter part of the year 1880 the company was reorganized with a capital stock of $500,000, and the works moved to Chicago where large arc lighting machines were built and his first experiments were made in the propulsion of street cars. His work in this direction at the Chicago Exposition and at the Exposition at Toronto, Canada, are familiar to all, and although the courts have not yet decided on the patent situation as to who the pioneer in electric matters was, yet it would seem that Mr. Van Depoele’s claim can be substantiated.

Mr. Van Depoele had a most wonderful capacity for hard work, and no matter what reverses came he was always hopeful always ready and willing to carry on his work at all hours of the day or night. Perhaps the best measure of his industry can be made by referring to his record in the Patent Office. We find that his first electrical patent was for an arc lamp and was granted April 27th, 1880, the application being filed September 20th, [p.176] 1879, and from that time until August, 1887, lie secured ninety-one patents of which the majority related to electric lighting apparatus, arc and incandescent lamps, dynamo electric generators, motors, converters and current controlling apparatus, together with a large number of patents relating to electric railways, and also to reciprocating electric engines and that form of elevated railways known as “telpher systems.”

In 1883 he received one of the earliest patents on electric railway underground conduit systems, and in February of 1886 he patented the overhead trolley switch now in use all over the country. During the years 1888 and 1890 (after he had become associated with the Thomson-Houson Electric Company) Mr. Van Depoele applied for and received fifty-three patents beginning with the universally used carbon commutator brush and including live different systems of underground conduit transmission together with the numerous devices entering into the now well-known overhead trolley system construction. In addition to these the list includes the pioneer patents on the closed circuit reciprocating electric percussion drill. During the year 1890, forty-six patents were granted him, including overhead electric systems, systems employing converters for modifying the current to be employed in electric railway circuits, contact devices for electric systems, telpher systems; several forms of electric railway underground conduits in which the conduit is entirely closed, and a number of methods of adapting electric currents to the propulsion of reciprocating engines, also several patents for alternating current motors.

During the year 1891, thirty patents were granted, including electric railway systems, with overhead and underground conductors, several patents relating to alternating current motors, and a number relating to reciprocating electric engines. In the early part of the year 1892 a patent was granted for electric railways, the filing date of which was June, 1885, and which contains broad claims for the upward pressure overhead electric railway system. The last patent granted during his lifetime was filed in the early part of 1887 and was for a railway power station system which, although not thought much of by others in that year, has since been demonstrated to be most important. The entire number of patents granted to Chas. J. Van Depoele is 225, and at the time of his death there were seventy-one applications pending before the U. S. Patent Office in his name.

[p.178] The list is a long one and represents many years of diligent study and earnest effort to promote electrical science in all its branches. Whilst it is impracticable to enumerate in detail, it may be said that the patent record left by Mr. Van Depoele has been equalled by only a few of his competitors and excelled by none in the scope and variety of the subjects treated by him. His range of vision, quickness of perception, and fertility of resource, were something marvellous, and when it is considered that he began experimenting in a small private laboratory in the city of Detroit in 1872, when, to obtain insulated wire of any description was a matter of personal effort, and when it is considered that in the summer of 1883 he had actually tested and for sale a dynamo electric machine operating 60 lights, it will be seen that he did pioneer work in everything which he undertook, and that in all probability he contributed as much to the development of the electric industry as any other one man.


Image added (not in the original text) from Thomas Commerford Martin, Stephen Leidy Coles, The Story of Electricity (1919), Vol. 1, opp. 435 (source). Text from Transactions of the American Institute of Electrical Engineers (1892), 175-178. (source)