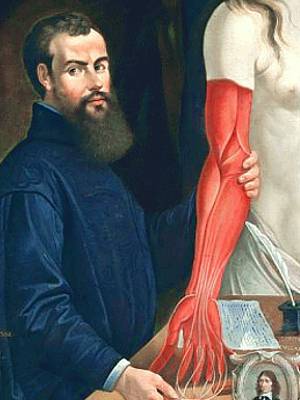 [p.280] VESALIUS, ANDREAS, the greatest anatomist of the sixteenth century, was born at Brussels in 1514. His father, Andreas Vesalius the elder, was apothecary to the emperor Maximilian; and his uncle Everardus was a physician, and the author of some commentaries on the works of Rhazes.

He received from an early age his classical and philosophical education at Louvain, and gained a degree of knowledge in physics which was unusual even with the best educated of the time. From Louvain he proceeded, to study medicine, to Montpellier, and then to Paris, where he had for instructors Guntherus ab Andernach, Sylvius, and Fernelius. In 1526, distinguished already by extraordinary zeal in the pursuit of anatomy, and exposing himself even to great personal danger in the [p.281] obtaining of bodies for dissection, Guntherus made him his chief assistant; and in the same year he discovered the origins of the spermatic blood-vessels.

After a long residence in Paris, he returned to Louvain, where he was soon appointed to teach anatomy: but in 1535, in order that he might obtain better opportunities for learning it himself, he joined the army of the emperor of Germany, who was then at war with France. In 1538 he was at Bologna, and in 1539 at Pavia, where in the following year he was appointed professor of anatomy, having not long before published his celebrated ‘Epistola docens venam axillarem dextri cubiti in dolore laterali secandam,’ Basle, 1539,4to., in which he gave an improved though imperfect anatomy of the vena azygos, and maintained that blood should always be drawn from the right arm, because of the near connection between its vessels and that vein.

Vesalius remained professor at Pavia for nearly four years; in 1543 he held the same office at Bologna; and not long afterwards he was appointed professor of anatomy, with an annual stipend of 800 crowns, at Pisa. His knowledge at his time is said to have been so unusual, that the best anatomists of the day left his demonstrations silenced.

He had in 1539 published some anatomical plates; and for the four succeeding years he gave a great portion of his time to the preparation of a complete work of the same kind, employing as his assistants some of the most skilful artists of the day. Moehsen says that Titian was among those whom he employed, but this is not certain; for the name of that great artist is not mentioned in Vesalius’s works, and yet is not likely to have been willingly suppressed.

In 1542 a part of the work was published, with he title ‘Suorum librorum de Corporis Humani fabrica Epitome,’ Basle, folio; and in 1543 the whole appeared. It was called ‘De Corporis Humani Fabrica Libri Septem,’ Basle, 1543, folio. Another and somewhat enlarged edition was published by Vesalius at Basle, 1555, folio; and, after his death, numerous editions appeared at various times and places. Haller calls it ‘an immortal work, by which all that had been written before were almost superseded.’ Senac speaks of it as the discovery of a new world; and probably nothing has been written, either before or since, which has had so great an influence on the progress of anatomy.

The boldness with which Vesalius attacked the accepted and long-reverenced opinions and statements of Galen and the other ancient writers; the completeness of the evidence with which he supported his own descriptions and arguments; the number of discoveries of structures which he announced, and the more accurate accounts which he gave of nearly all that had before been known; the extent of the work, and the number and unusual excellence of the plates, were enough to mark the commencement of a new aera in the science of medicine. 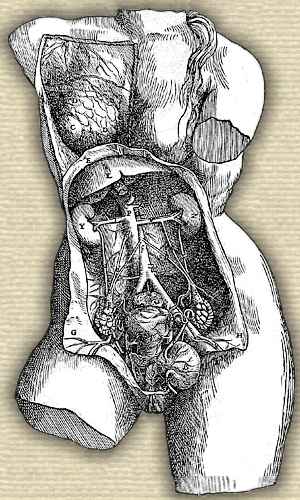 But instead of the honour which Vesalius has received, and while anatomy is studied will never fail to receive from his successors, his contemporaries, or at least the most distinguished of them, heaped on him the most virulent reproaches; for the authority of Galen in the schools was at that time supreme, and to question it was to destroy the credit of all the learning to which the teachers pretended. Sylvius said that Vesalius ought henceforth to be called ‘Vesanus,’ and declared perpetual hostility against him. Piccolomini more craftily maintained that all the truth Vesalius had written was taken from the Galen and Hippocrates whom he calumniated; and Driander. Putæus, Eustachius, and Fallopius, though with less virulence, each in his way assailed him. Their attacks appear to have greatly irritated Vesalius, who seems to have been disposed to resist the authority of the ancients, not less by his temper than by his conviction that they had often been in error.

In 1546 he wrote ‘De radicis Chinæ usu Epistola,’ Basle, 1546, folio, a work in which he attacked Galen with much more virulence than before, but which he rendered of great interest by proving, by numerous examples, that Galen’s descriptions must have been drawn from the dissections of monkeys and other animals, and very often from the works of his predecessors without any dissections at all.

In spite of the opposition of his contemporaries, the fame of Vesalius, both for skill in practice and for learning in the science of medicine, greatly increased after the publication of these works; and anatomy soon suffered much more from the honour than from the abuse which was lavished upon him. About 1544 the emperor Charles V. appointed him his chief physician; and he was gradually obliged to be so constant in his attendance on the court of that prince, and afterwards of Philip II. of Spain, that anatomy was entirely neglected, except in the occasional opportunities which were afforded by the examination of the bodies of those who died of strange diseases.

In 1561, when he wrote his ‘Anatomicarum Gabrielis Fallopii Observationum Examen,’ which was published at Venice in 1564, he was at Madrid, where, he says, he could not even procure a skull to examine in order to settle some point on which he was in doubt; and both this work and the ‘Examen Apologiæ Fr. Putæi pro Galeno,’ which was published, under a feigned name, at the same time and place, prove, Haller says, that since he left Pisa, in 1544, he had added scarcely anything to his anatomical knowledge. His knowledge of practical medicine and surgery however appears to have greatly increased; and many wonderful stories are recorded of the skill with which he treated those about the court.

In 1563, or the beginning of 1564, Vesalius suddenly left Madrid and the court, and went on a pilgrimage to Jerusalem. The circumstances which led to this strange step are very doubtful. The story commonly received is, that having obtained leave from the friends of a Spanish gentleman, who had apparently died under his care, to examine the corpse, he proceeded to the dissection, and the heart, on removing it from the body, quivered in his hand. The friends, hearing of this, accused him, not of murder only, but of impiety, before the Inquisition; and it was only by the intercession of Philip II. that he was permitted to expiate his error by a pilgrimage. There is no other evidence for this tale than that it was current not long after Vesalius’s death; and, on the whole, it seems more probable that he left Spain in consequence of being mixed up in some of the political or court plots which were at that time very numerous, and of the results of which, as he was of a melancholy disposition, he might very well be in fear.

Whatever led to his pilgrimage, its end was most disastrous. While he was at Jerusalem, in 1564, Fallopius died, and the Venetian senate invited him to the vacant professorship of anatomy. On his voyage to Padua, his vessel was wrecked on the isle of Zante, and there the great Vesalius died of starvation, according to the accounts of some, but, as it seems more probable, of the fatigue and exposure which he had suffered.

Besides the works already mentioned, the only others that can certainly be ascribed to Vesalius are some Consilia, published in the collections of Montanus, Garetius, Ingrassias, and Scholzius; and a paraphrase and translation of some of Rhazes’ works. The ‘Chirurgia Magna in septem libros digesta,’ which Prosper Borgaruccius published at Venice, in 1568, and ascribed to Vesalius, was probably not written by him, but collected by the editor from the works of Fallopius and others.

Vesalius left a half-brother Francis, who refused to study the law, for which his parents had destined him, and commenced the pursuit of anatomy, that he might defend the memory of his brother from the attacks which were made on it, not less virulently for some time after his death than they had been during his life. But an early death prevented his design.

The whole of Vesalius’s works and his Life were edited by Boerhaave and Albinus, at Leyden, in 1725, in 2 vols, folio. Portal’s ‘Histoire de l’Anatomie et de la Chirurgie,’ t.i., p. 394, and Haller’s ‘Bibliotheca Anatomica,’ t.i., p. 180, contain, together with the Life of Vesalius, analyses of his chief works.