[p.565] I ... refer to the work which I carried out in this country and which resulted, in 1885, in the building of the first alternating-current plant at Great Barrington and the introduction to the country, by the Westinghouse Electric Company, of the system that operated there. ...

[p.566] It is difficult for engineers of the present day to appreciate the conditions of that time. Please remember that there were but few books on electrical engineering, no formulae, except those hidden away in scientific papers, no nomenclature, and there was  [p.567] hardly any information about alternating-current phenomena available. All of the alternating-current machinery devised prior to this date, with the exception of the Siemens alternator, failed for one reason or another, and there was a popular opinion that there was nothing of value in the alternating-current field. It therefore took definite self-conviction to believe that the solution of the distribution of energy by electricity lay in this despised and rejected line of work. At this time the laws of the magnetic circuit were not generally understood or accurately defined, and it was difficult to find an engineer who had a clear, clean, definite, and easily applicable conception of the subject, so when I began studying induction coils the phenomena that appeared were strikingly novel, and interesting, and to me, at least, it was only possible to have a physical conception of them, not a quantitative estimate of their value. ...

One day when the experimental work was troubling me Mr. Westinghouse told me that he could get an option on the work of  [p.568] Goulard & Gibbs, and suggested that he send for their alternating (Siemens) machine and their induction coils. I told Mr. Westinghouse that I did not think the system commercially useful, but that I appreciated its coming—particularly the alternator— and this led me to tell him that if the induction coils were wound for parallel instead of series connections, as used by Goulard & Gibbs, the distribution problem would be solved, as each coil would then operate independently of the others in circuit and would be self-regulating, both as to electromotive force and current transformed. ...

...Mr. Westinghouse hesitated to furnish the money necessary for me to experimentally prove my  [p.569] views, and for a moment I was at a loss to know what to do. I had a little capital, and finally I made a trade with Mr. Westinghouse and sold him half of my holdings, realizing several thousand dollars, and agreed to use the funds so obtained in experimental work for the company's benefit. This arrangement now seems a trifle one-sided, as I did not benefit by it excepting as a stockholder in the company; but I suppose that Mr. Westinghouse was doubtful of my success, and therefore did not feel justified in putting up the money. For my part, I feel that I made the best bargain of my life, for, with the enthusiastic approval of the one who never hesitated at taking a chance—the one whose courage never failed—we packed our belongings, shook the dirt of dreadful Pittsburgh from us, and hastened to the green fields of Berkshire, to build a laboratory and succeed or perish in our work. ...

[p.570] ...At the north end of the village of Great Barrington was an old, deserted rubber mill. This I leased for a trifling sum, and erected in it a 25-horsepower boiler and engine that I purchased for the purpose. I have frequently met, in a long and stormy life, serious and obstinate difficulties, but I have never encountered any mechanism, of any kind whatsoever, that possessed so profound a genius for going wrong as this engine. My engineer once offered to bet the engineer of the woollen company ten dollars that my engine could pump all the steam and water from their battery of boilers in twenty minutes, and I believe that if he could have kept her going for that time he would have won. After about a month's work we synchronized the power plant—got the pump injector, boiler and engine to agree to work on the same day.

After what seemed another interminable delay we at last installed the Siemens alternator that Mr. Westinghouse imported from London. In the meantime I had started the construction of a number of transformers in the laboratory, and engaged a young man to canvass the town of Great Barrington for light customers. 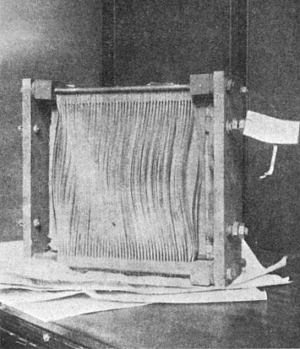 The Siemens alternator was wound to furnish 12 amperes of current with a maximum of 500 volts. Having a very high armature inductance, it was very sensitive to load variations. Starting out from the old rubber factory in which the laboratory and plant was installed, two No. 6 white underwriter wires were stretched down the main street of the village and fastened to insulators nailed to the big elms bordering the sidewalks. A pair of No. 10 wires were connected from the centre of distribution of the system and brought back on separate insulators to the laboratory in order that we might determine the exact drop of the line under variations of load. Finally, after the wiring was [p.571] completed, half a dozen transformers were installed in our customers' cellars. They were placed in wooden, skeleton boxes covered with mosquito netting and kept under lock and key.

We built in all at the Great Barrington laboratory twenty-six transformers, ten of which were sent to Pittsburgh to be used in a demonstration plant between the Union Switch and Signal Company's factory and East Liberty. This plant was operated a year after the Great Barrington plant had demonstrated the cooperativeness of the system. We installed in the town plant a Barrington two 50-light and four 25-light transformers, the remainder being used in the laboratory for experimental work. Of the twenty-six transformers built, one short-circuited under [p.572] test. The transformers in the village lit thirteen stores, two hotels, two doctors' offices, one barber shop, and the telephone and post offices. The lamps were of 150-, 50-, and 16-candlepower sizes. The length of the line from the laboratory to the centre of the town was about 4,000 feet.

At this time I called my induction coils “converters,” coining this name for them. It was adopted generally. I really did not quite like the name, and one day I asked my friend Senator Hosmer, the local scholar, to come to supper, and after explaining to him the action of my converters asked him to improve the name. He suggested that “converter” implied a conversion of one kind of thing to another kind of thing, but that “transformer” was more applicable to the device. I, however, hung on to “converter” until later, in England, I believe, they adopted the change that Hosmer had suggested.

We first devised and tried out at the Great Barrington laboratory the step-up and step-down transformer system now so generally used for power transmission, the generating electromotive force being transformed from 500 to 3,000 volts and from 3,000 back to 500 volts, and then sent over the line downtown. Lamps connected in series across these voltages gave voltmeter evidence that these transformations were really performed. This, so far as I know, was the first high-potential, alternate-current transmission line ever attempted.

I find from my old record books that the town plant was not put into regular service until March 6, 1886, but long before this time the system was tried out and had vindicated itself. At last the town was lighted, and we had ocular evidence of our success. We made a gala night of it. The streets and stores were crowded with people, the big 150-candle-power lamps were running at about double their candle-power, and my townsmen, though very skeptical as to the dangers to be encountered when going near the lights, rejoiced with me.

This plant continued to operate successfully, with the exception of one small fire, until an attendant, in the summer of 1886, dropped a screw-driver into the alternator and ruined it.

Long before this, however, I became convinced that the Siemens alternator did not possess the characteristics necessary for the best operation of the system. Between November 5 and 15, 1885, I designed and completed the drawings of a new alternator [p.573] —the radial pole type of machine now so well known—and sent them to Pittsburgh. This machine proved a really remarkable designing success. It was calculated to deliver 500 volts with a drop of 2 per cent, between full and no load when running at a thousand revolutions and with 10 amperes of excitation current. It actually gave 490 volts under these conditions, while its inherent regulation was very close to the amount predicted. Furthermore, it was decently cool.

I presume the design of such a machine seems a very simple matter, but in those first days it was no trifling experiment, for many attempts to build alternators having iron cores with strong fields had been unsuccessful. I took the position that a constant potential alternator should have these characteristics, and that a machine could be devised that would give them.

On April 6, 1886, Messrs. George and H. H. Westinghouse, William Lee Church, Guido Pantalioni, H. H. Jackson, Franklin L. Pope, and Walter C. Kerr came to Great Barrington to visit my laboratory, where they saw the system working for the first time. This visit determined Mr. Westinghouse to actively enter the alternating-current field, as the novelty and scope of the system surprised him greatly.

I have a very personal affection for a transformer. It is such a complete and simple solution for a difficult problem. It so puts to shame all mechanical attempts at regulation. It handles with such ease, certainty, and economy vast loads of energy that are instantly given to or taken from it. It is so reliable, strong, and certain. In this mingled steel and copper, extraordinary forces are so nicely balanced as to be almost unsuspected. This equilibrium is remarkable. It is like putting on the pans of a delicate chemist's balance 10-pound weights so exactly timed in their application that never a tremor stirs the needle from its mark. ...

Extract from paper presented at the joint meeting of the Electrical Section and the Philadelphia Section, American Institute of Electrical Engineers (15 Feb 1912). In William Stanley, 'Alternating Current Development in America', Journal of the Franklin Institute (1912), 173, 565-573. (source)