William Whewell
“Gold and iron…are the rulers of the world” 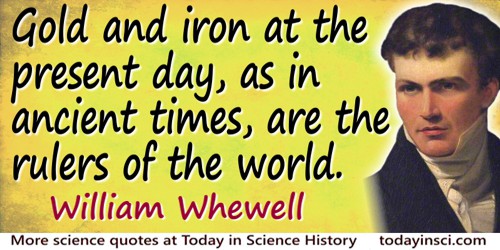 “Gold and iron at the present day, as in ancient times, are the rulers of the world; and the great events in the world of mineral art are not the discovery of new substances, but of new and rich localities of old ones.”
— William Whewell
Lecture, 'The General Bearing of the Great Exhibition on the Progress of Art and Science' (Nov 1851)

William Whewell wrote the quote above in an extensive lecture that he read to the London Society of Arts on 26 Nov 1851. His topic was 'The General Bearing of the Great Exhibition on the Progress of Art and Science.' He offered his reflections as a spectator of the Great Exhibition in the Crystal Palace, in Hyde Park, London, shortly after it closed. (It was open in 1851 from 1 May to 15 Oct.)

The 'Lectures on the Results of the Great Exhibition of 1851' series took place at the suggestion of H.R.H. Prince Albert, the President of the Society. Those subscribing this address included Robert Stephenson, Isambard K. Brunel, Charles Dickens and Michael Faraday.

While Whewell was considering the classifications into which areas of the exhibition were divided, he remarked about Minerals:

“In the class of Minerals, all the great members of the class are still what they were in ancient times. No doubt a number of new metals and mineral substances have been discovered; and these have their use; and of these the Exhibition presented fine examples. But still, their use is upon a small scale. Gold and iron, at the present day, as in ancient times, are the rulers of the world; and the great events in the world of mineral art are not the discovery of new substances, but of new and rich localities of old ones,—the opening of the treasures of the earth in Mexico and Peru in the sixteenth century, in California and Australia in our own day.”

The treasures that he was refering to, was gold. By the early 1800s, the gold production in Mexico and South America was greater than all Europe combined.1 The discoveries in Whewell’s day were the Australian Gold Rush (Ophir, 19 Feb 1851) and the California Gold Rush (24 Jan 1848, Sutter's Mill).

Perhaps if Whewell were here in our modern day, he may have been interested that there is increasing interest in developing sources of  lithium in of increasing importance for electric vehicle batteries. The so-called rare earth metals are sought to make the strong magnets needed in the generators of wind turbines and the motors of electric vehicles. As production of green energy replaces the use of fossil fuels, these minerals may become significant in the coming years, though they are not as abundant as iron.

1 Emma Willard, Ancient Geography: As Connected with Chronology, and Preparatory to the Study of Ancient History (1821, 1835), 156. (source)