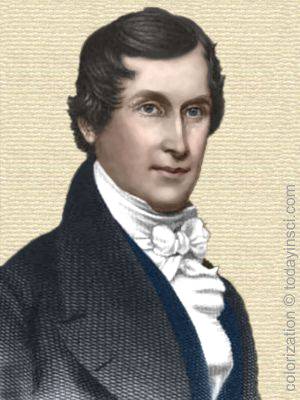 [p.265][Died] Canvass White, aged 44. Canvass White was born in Whitestown, N. Y., Sept. 8th, 1790. His health, from his infancy, was always delicate, and being unable to share with his brothers the severe labor of farm life, his earlier years were passed as clerk in a country store at Whitestown. His mechanical ingenuity and inventive genius were apparent at an early age, and were turned to practical account in the improvement of many utensils in use on the farm.

In 1811, he was compelled on account of poor health to take a sea voyage from which he returned the following year. Soon after, he entered the army with the rank of lieutenant, and saw some months of active service. At the close of the war he returned to his duties as clerk, but his strong taste for mathematical and scientific pursuits rendered this life an irksome one, and he soon left it, to pursue his studies in Fairfield, and afterwards in Clinton. In the latter place lie was engaged for a short time in chemical manufacturing, but this proving unsuccessful, he returned home, and assisted in the management of the farm.

In the spring of 1816 he joined the corps of engineers for the Erie Canal under Benj. Wright, whose confidential friend and associate he soon became. Mr. White had a most kindly and winning disposition, which won for him the esteem and friendship of all with whom he came in contact, and when in 1817, he made the acquaintance of Gov. DeWitt Clinton, it was but a short time before that gentleman entertained the highest regard for his personal qualities and the utmost confidence in his professional abilities. Little was then known in this country of the actual details of canal navigation and as the information given in English books was vague and unsatisfactory, Mr. White went to England in the autumn of 1817, at the solicitation of the governor, to examine in person the English canal system. During his stay of several months abroad he traveled over 2000 miles on foot, studying closely the construction of every canal, gate, lock and culvert. On his return he brought with him drawings of the [p.266] most important structures, and the model of the first boat which was built for the Erie Canal.1

Considerable difficulty was experienced by the canal commissioners in procuring a cement suitable for use in the construction of locks and it was finally proposed to import the needed article from England, at considerable expense. Mr. White gave his attention to the matter, however, and after repeated experiments, succeeded in manufacturing from a stone found in Madison Co., an hydraulic cement which exactly answered the purpose, and on which he obtained a patent in 1820. He was interested in its manufacture for several years subsequent. Mr. White’s share in the construction and development of the Erie Canal was an important one. As regards authority he was second only to Mr. Wright, and every plan or measure of importance was submitted to his judgment before being acted upon.

It was while he was engaged in the construction of the canal that Mr. White’s attention was called to the eligibility of this locality as the site for a great manufacturing town. In 1825 he devoted himself to the formation of a company to develop the remarkable water power of the place, and with the assistance of Governor Clinton, succeeded in interesting a number of capitalists in his enterprise. The result was the incorporation of the Cohoes Co., in March, 1826. Mr. White was the first president of the company, and acted as its agent. Though necessarily away a large portion of tile time while engaged on other works, he devoted a good deal of his personal attention to the laying out of plans for the development of the company’s resources and the formation of a manufacturing town. He was succeeded as agent by his brother Hugh White, in 1830, though continuing to have an active part in the direction of the company’s affairs. He never had a residence in Cohoes, but while engaged here, boarded in Troy. From the completion of tile Erie Canal, until the time of his death, Mr. White was constantly employed in different parts of the country in public works of importance. Among the principal works which he planned or superintended during these years, may he mentioned time Susquehanna and Schuylkill Canal, the improvements of the Schuylkill Navigation Co., the New Haven and Farmington Canal, the Lehigh Canal, (1827-1828), the Delaware and Raritan Canal (1830), and the Delaware breakwater. Mr. White was induced to take a contract for time completion of the latter structure, and by the mismanagement of others was a loser to a large amount.

In 1834 his failing health compelled him to leave business, and he went to Florida, hoping that the climate would have a favorable effect upon his disease, which was consumption, but the step had been taken too late, and within a month after landing, he died, on December 18th. His remains were brought north and interred at Princeton, N.J., where his family were residing at the time. The estimate in which Mr. White’s professional abilities were held by his contemporaries, may be seen by the following remark of Henry Clay, addressed to a gentleman who was seeking an engineer for time Chesapeake and Ohio Canal. “Get Mr. Canvass White; no man more [p.267] competent, no man more capable. And while your faith in his ability and fidelity increases, your friendship will grow into affection.” It was also said by Gen. Bernard, U. S. engineer, “as a civil engineer he had no superior; his genius and ability were of surpassing magnitude.” Mr. White’s gentle disposition, and the kindly charm of his manner, had endeared him to all whom he chanced to meet, and his early death was mourned by a large circle of friends."

1 This boat, which was called the “Chief Engineer of Rome” in honor of Benj. Wright, was launched upon the canal between Whitestown and Rome, amidst the greatest rejoicing of the people of the neighborhood. The model was kept in Mr. White’s family for fifty years and then presented to the Buffalo Historical Society.

The First American Canal-boat, The Chief Engineer, which made the Trip from Rome to Utica,
October 22, 1819.
(Built at Rome from a design by Canvas White, and named in honor of Benjamin Wright, the chief engineer of the Erie Canal.)
colorization © todayinsci (Terms of Use) (source)

Image added (not in original article) from Charles Beebe Stuart, Lives and Works of Civil and Military Engineers of America (1871), 74 (source). Text from: Arthur H. Masten, The History of Cohoes, New York, From its Earliest Settlement to the Present Time (1877), 265-267. (source)