François Arago
“Destiny of a scientist” 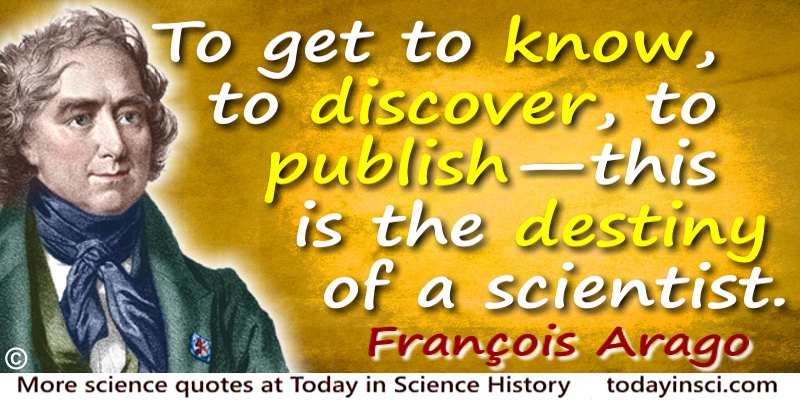 “To get to know, to discover, to publish—this is the destiny of a scientist.”
— François Arago
From 'De L’Utilité des Pensions.'

This quote comes from a work, published postumously, in which Arago pointed out, as the title makes clear: The Usefulness of Pensions Granted to Scientists, Writers and Artists. The Frenchman, François Arago, had already made significant contributions to science when later in life he became a republican politician. This gave him the opportunity to recommend to the government that certain savants in France be supported with state pensions to enable the nation to advance in science, technology, and the arts. Genius should be nurtured so an individual can be productive without the struggles of poverty.

After describing the worthy work of French scientists, Arego wrote (in his original French):

which can be found translated as:

“To get to know, to discover, to publish—this is the destiny of a scientist.”

A translation closer to the original words could be: “To know, to discover, to publish, this is, basically, our honorable destiny.” The above translation, was clarified by adding the word “scientist” from the context.

To justify government supporting them financially to concentrate on their work, he continued:

Translated loosely,1 he was saying that no doubt there are highly intelligent men among whom love of wealth rewards these passions, but the same men would have less zeal if fate had left them struggling with poverty and an imagined happiness of promised fortune.

1 Translated by Webmaster, who would welcome suggested improvements from a bilingual person.


Text by Webmaster. The first translation is as it appears in A.L. MacKay, A Dictionary of Scientific Quotations (1991), 10. The original French quotes are from François Arago, Oeuvres de François Arago (1855), Vol. 3, 621. (source)