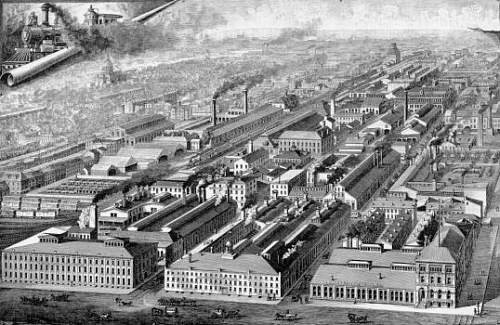 These are among the oldest and most prominent of the manufacturing establishments of Philadelphia. Mr. Baldwin, the founder of these works, is accredited with having constructed the first successful locomotive ever made in the United States.

The first locomotives brought into the United States were imported from England in the fall of 1829 or the spring of 1830 by Horatio Allen, of New York, and one of them was set up on the Delaware and Hudson Railroad at Carbondale, Pa.; but, being found too heavy for the track, its use was abandoned. The first locomotive constructed in this country was built at the West Point Foundry, at New York, in 1830, for a South Carolina railroad, and named the Phoenix. A second engine was built the same year by the same establishment, and for the same road, and named the West Point. In the spring of the same year an engine was built for the Mohawk & Hudson Railroad, from Albany to Schenectady, and called the DeWilt Clinton; and this was the first locomotive ever run in the State of New York. But none of these, we are told, worked successfully, and the first successful locomotive made in this country, we believe, was one made by Mr. Baldwin, in 1832, on an order from the Philadelphia & Germantown Railroad Company, and placed on that road in January, 1833. It ran a mile in less than a minute, and its performance was not exceeded for years after. The business having been thus commenced, the successful experimenter proceeded to procure the necessary tools, patterns and fixtures for its extension as rapidly as they could be obtained, and to erect the shops on Broad above Callowhill St., now occupied as the works, which were completed in 1834. In the first year after their erection, fourteen locomotives were manufactured; in 1836, forty; and thenceforward the business, varying with the circumstances of the times, has progressed and prospered with the development of railroad enterprise throughout the country, until now the firm employs eight hundred hands, and produces machinery equal to one hundred and twenty Locomotives per year.

Our readers who may have examined the list in this History, of important inventions patented within the last twenty years, will have noticed that the name of Matthias W. Baldwin occurs more than once. The plan of attaching the cylinders to the outside of the smoke-box, now almost universally adopted, originated with him; and also the metallic ground joints, and various minor improvements, upon which the present perfection of the Locomotive Engine depends.

In 1842, Mr. Baldwin introduced the six and eight-wheel connected engine, with an arrangement of truck for adaptation to the curves and undulations of the road. The Superintendent of the largest coal freighting road in the United States says of these: " They are saving us thirty per cent, in every trip on the former cost of Motive or Engine Power."

The proprietors of these works have for years been engaged in perfecting a system of engines, by means of which they could be adapted to economical working on almost any grade or curve. Several distinct kinds, and numerous sizes of each kind, from three to thirty-five tons weight, are manufactured with from two to eight driving-wheels. The system of adaptation, and its advantages, are seen in its results. On the Pennsylvania Railroad, Eastern Division, where the grades are moderate, a passenger engine has been running, over eighteen months, one hundred and thirty-three miles per day without the loss of a trip for repairs.

On a railroad crossing the Blue Ridge, engines of this firm's construction have been ascending grades rising at the rate of 296 feet per mile, and swinging trains of eight-wheel cars carrying forty and fifty tons of freight and passengers, around curves of less than 300 feet radii, performing their appointed duty, without a single failure, for years, and establishing the claim of the American locomotive in climbing steep grades to unrivaled pre-eminence.

During the present year (1863), this firm have made large additions to their buildings and facilities for manufacturing. They erected a Foundry 109 by 90 feet, are now building a three-story Erecting shop, 206 feet on Broad street, 133 feet on Willow, and 68 feet on Hamilton street, and propose to build a Smith shop 180 by 160 feet.

Since 1854, Mr. Matthew Baird has been associated with Mr. Baldwin in the proprietorship of these works, and has been the active managing partner. The ability with which he has filled this onerous and responsible position is evidenced by the increased prosperity of the establishment, which now affords employment to so many hundreds of the best mechanics in Philadelphia.