From The National Cyclopaedia of American Biography (1899) 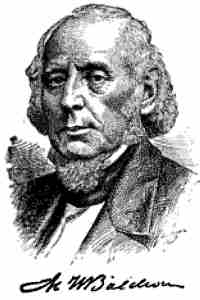 BALDWIN, Matthias William, inventor and manufacturer, was born in Elizabethtown, N. J., Dec. 10, 1795. His father, William Baldwin, had accumulated a comfortable property as a carriage-builder; but this was subsequently dissipated by the bad management of his executors, leaving his widow and children in dependent circumstances.

Matthias Baldwin received a good common school education; but from early youth the bent of his mind was more toward mechanical contrivance than books. He would take his toys to pieces to learn their construction, and turn his mother's rooms into workshops for the manufacture of his devices, which were always finished with marvelous neatness and skill.

At the age of sixteen he was apprenticed to the trade of a jeweler with Woolworth Bros., of Frankford, Philadelphia, Pa., and in 1817, shortly after the expiration of his term of indenture, removed with his mother to Philadelphia. Here he was employed by Fletcher & Gardener, extensive manufacturers of jewelry on Chestnut street, and soon became one of the most useful men in the shop. He was never content with mere blind imitation, and loved to produce work as perfect as possible. Soon, orders demanding taste, thought and invention began to pass into his hands, and he rose rapidly in the esteem of his employers and fellow-workmen.

After two years of journeyman work, he had saved sufficient to enable him to commence the manufacture of jewelry on his own account, and his reputation as a skillful workman immediately attracted custom, and seemed to promise flattering success. In the meantime, he was making constant improvement in the machinery and methods of his trade, inventing, among other things, a new process of gold-plating, now very generally employed, consisting in soldering the gold plate to the base metal, and rolling the two until compressed to the required thinness.

Owing to a sudden and unaccountable decrease in the demand for jewelry, he was obliged to think of some new field of operations, and in 1825 formed a partnership with David Mason, a machinist, for the manufacture of bookbinding tools, machinery and dies, which had hitherto been exclusively imported. They afterward added the manufacture of cylinders for printing calicoes, and shortly completed the great improvement of etching devices on the steel mills, which transferred them to the cylinder.

The rapid growth of their business necessitated removal to larger quarters, and then the employment of improved power. To supply the latter need, Mr. Baldwin constructed, in 1828, a small stationary engine of about five horse-power, which was used continuously in his shop for over forty years. This engine was not only more complete and powerful than any then in use, but, contained an original improvement in the method of imparting rotary motion, which proved the germ of the ponderous marine engines now in use.

By degrees, the manufacture of steam-engines became the most important department of his business, until in about ten years he was reckoned the foremost engine-builder in the country. In the fall of 1830, the Camden and Amboy Railroad Co. imported a locomotive from England, which, after a careful examination, Mr. Baldwin reproduced in a working model for the Philadelphia museum.

Encouraged by this achievement, he directed his attention boldly to introducing upon American railroads a better locomotive than the rude and unmanageable machines then in use, being particularly interested in contrivances for generating and economizing steam. The first locomotive from his shops was completed after overcoming numerous obstacles, and tested at a grand public trial, held Nov. 28, 1832. During the next three years he completed some ten locomotives, containing, among other improvements made by him, devices for the adjustment of the crank, the insertion of the steam-pipe and the construction of the driving-wheels.

With the steady growth and extension of railroad traffic arose numerous problems, which he met and grappled with successfully. The great difficulty involved by the original clumsy rigid-frame patterns of locomotives in turning curves with a heavy train was met by him: first, with his invention of the six-wheel gear locomotive, patented in 1841; and later, by his “flexible truck.” Although there were several competitors in the field when he first began the manufacture, his work in reality made possible the heavy freight traffic of the present day; and in other respects the science of railroading has been advanced by the inventions of his fertile brain.

To his latest day, Mr. Baldwin found his best loved recreation in repairing watches and constructing small mechanical devices. But the master machinist and inventor was noted also for his philanthropy and earnest piety. He was one of the most active founders of the Franklin Institute in 1824, and in after-life a prominent supporter of its educational enterprises.

A devoted member of the Presbyterian church, he was widely known as a builder of churches and missions. His heart and purse seemed always ready to respond to appeals from deserving sources. He opened a school for colored children in Philadelphia, and for years paid the salaries of its teachers. When, in 1835, an appeal was made for the support of Pompey Hunt, a negro evangelist, he himself guaranteed a generous sum to enable him to continue preaching the Gospel.

Mr. Baldwin's interest in the cause of the negro race and his earnest advocacy of abolition were of life-long duration, and during the stormy times before the civil war, were very often quoted to his disadvantage by business competitors. But his life was governed by the convictions of his conscience, and, come what might, he could not be moved. He was a member of the Pennsylvania state constitutional convention of 1837, and voted earnestly against the exclusion of negro property-holders from the right of the franchise.