H. W. Bates - “On these expanded membranes Nature writes, as on a tablet” 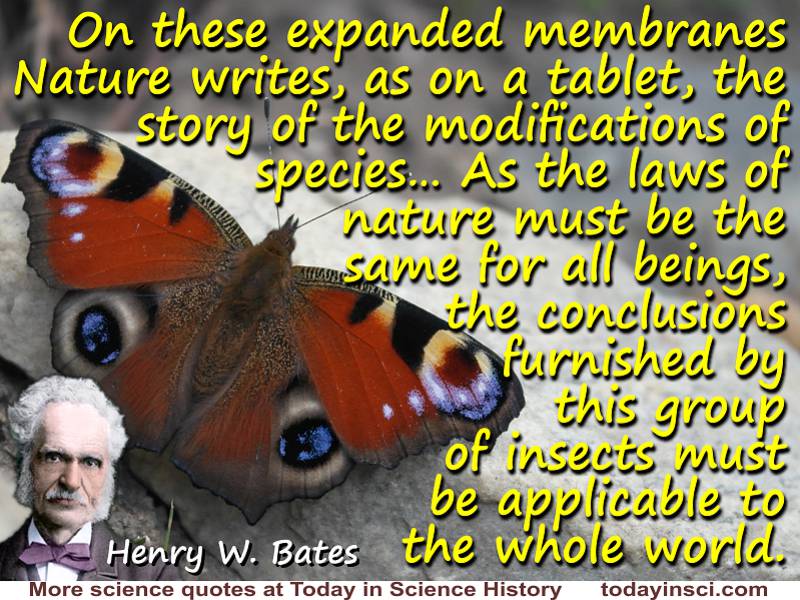 “On these expanded membranes Nature writes, as on a tablet, the story of the modifications of species, so truly do all changes of the organisation register themselves thereon. Moreover, the same colour-patterns of the wings generally show, with great regularity, the degrees of blood-relationship of the species. As the laws of nature must be the same for all beings, the conclusions furnished by this group of insects must be applicable to the whole world.”
— H. W. Bates
The Naturalist on the River Amazons (1864)

Context of H.W. Bates’ quote, “On these expanded membranes Nature writes, as on a tablet”

As a youth, being the oldest son of a Leicester hosiery manufacturer, Henry Bates had been made to leave school at age twelve to learn the family business. He was expected to take it over in the future. Henry nevertheless enjoyed the intellectual pursuit of reading through the natural history section of the Leicester library. In particular, his passion was for insects, and he made a rich collection of local butterflies and beetles.

At a free lecture there, he met Alfred Wallace, also a self-taught naturalist, who was building a herbarium of local plant specimens. They eagerly discussed any new book of natural history, and had read of von Humboldt's travels in the Amazon, and Charles Darwin’s Voyage of the Beagle. Eventually, they planned their own expedition to the Amazon, and were encouraged by museum curators who offered to pay for interesting specimens they might come across in their travels. Thus two relatively inexperienced naturalists set off to spend years collecting in Amazonia, and each returned to spend a lifetime contributing to the understanding of nature. Wallace, of course, is remembered for independently coming up with a theory of evolution, which prompted Darwin to finally publish his own.

Meanwhile, H.W. Bates became famous as the discoverer of “Batesian mimicry” (the resemblance in form or markings to a noxious, conspicuous species that deters predators of an otherwise palatable species). He had maintained correspondance with both Wallace and Darwin. Bates’ identification of the survival gambit of mimicry in many different species, provided Darwin with very satisfying empiral evidence in support of evolution through natural selection.


Text by Webmaster. The quote is from Henry Walter Bates, The Naturalist on the River Amazons: A Record of Adventures, Habits of Animals, Sketches of Brazilian and Indian Life, and Aspects of Nature Under the Equator, During Eleven Years of Travel (1864), 413. (source)