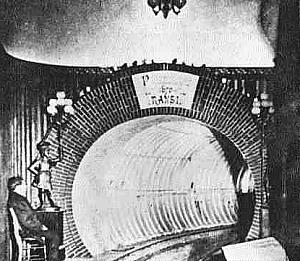 Image from a stereoscopic photograph showing the entrance to the tunnel. On the arch is carved: Pneumatic 1870 Transit. Statues of Mercury on each side carry colored gaslights. (source)

Certainly the most novel, if not the most successful, enterprise that New-York has seen for in many a day is the Pneumatic Tunnel under Broadway. A myth, or a humbug, it has hitherto been called by everybody who has been excluded from its interior; but hereafter the incredulous public can have the opportunity of examining the undertaking and judging of its merits. Yesterday the tunnel was thrown open to the inspection of visitors for the first time, and it must be said that every one of them came away surprised and gratified. Such as expected to find a dismal, cavernous retreat under Broadway, opened their eyes at the elegant reception room, the light, airy tunnel and the general appearance of taste and comfort in all the apartments, and those who entered to pick out some scientific flaw in the project, were silenced by the completeness of the machinery, the solidity of the work, and the safety of the running apparatus.

The entrance to this tunnel is on Broadway, at the corner of Warren-street. At the bottom of the steps is the entrance to an office, and the apartment of the “rotary blower”, a huge paddle-box-like affair, neatly frescoed on the outside. To the right a door leads into a long hall, down a few more steps, and directly under the Warren-street sidewalk, which is the “depot” of the establishment, and is handsomely fitted out with a fountain, paintings, and seats. This hall opens towards Broadway to the tunnel, at the entrance of which stands a car ready for passengers. Adjoining the depot is the machinery for pumping the air in and out of the tube, which is worthy of an examination. The tunnel way itself, how it looks, and how it was bored out, has been so often described in the various daily journals that only a brief account need be given here. The tube is eight feet in diameter, arched all the way around with brick painted white. From the bottom of it to the surface of Broadway is twenty-one feet, and it is therefore below all pipes and sewers. After curving around the corner of Warren-street the tube is perfectly straight. On the bottom is a track about four feet wide. The car which runs upon this is about half as large as a streetcar, cushioned, lighted, ventilated, and elegant in all its appointments. The contrivance that bores out the tubes is a huge iron cylinder, sharp at the end penetrating the earth, and is forced along by hydraulic pressure. The dirt is then shoveled out. So far, the tubes now being complete 120 feet, or as far as the south side of Murray-street, the excavation has been through sand only, and not a difficult matter. Yesterday the gentlemanly engineer of the Company explained the whole construction of the tunnel, over and over again, to the visitors that kept coming and going.

Such, in brief, is a description of the various compartments of the mysterious underground Broadway tunnel, begun but a few months ago. The enterprise is controlled by the Beach Pneumatic Transit Company, who propose to run their tunnels in every direction eventually, and make rapid communication between distant parts of the City. They claim that their cars can run at the rate of one mile a minute with perfect safety by the pneumatic process.

The opening yesterday afternoon was a very pleasant occasion. It was intended specifically for dignitaries, legislatures, Aldermen, scientific men, and members of the Press, and scores of them were present. Mr. Beach himself was conspicuous, making his visitors explanations and entertaining them like princes. Judge Daly, members of the American Institute, City officials, and many prominent citizens were observed among those who came. In the “depot”, or reception room, a first-class subterranean lunch was served continuously from 2 o'clock to 6 o'clock, and it was continuously appreciated. The “health” of the tunnel was not forgotten. At night fall the unique occasion was over, but the “Transit Company” had made a host of friends and supporters.

The tunnel is to be open to the public every day from the 1st of March. The tickets of admission will be twenty-five cents, the entire proceeds to go to the Union House for the Orphans of Soldiers and Sailors.